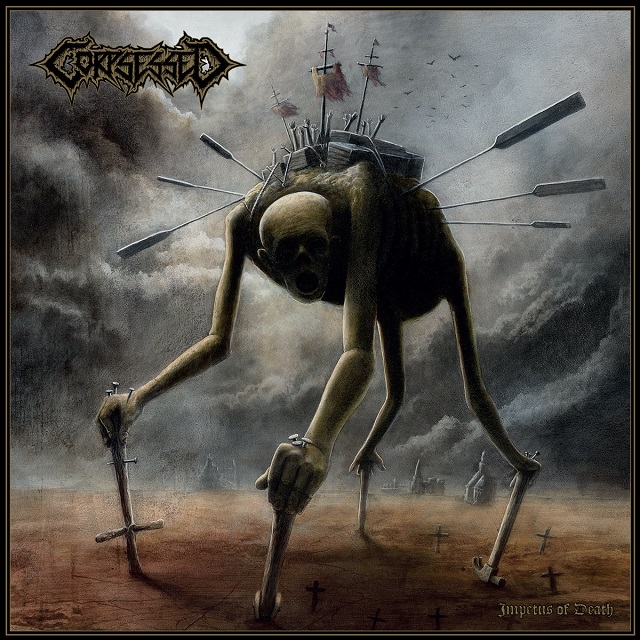 I dig Finland's Corpsessed even if I hate their name and have to check it like three times every time I type it; the band make up for that with their ultra-heavy take on death metal, one that is drenched in atmosphere and feeling, so much so that I was actually surprised to be reminded that this is only their second album given the not insignificant real estate they seem to occupy in my brain. I dunno, maybe that's all just that band name, but the tunes don't hurt, the band absolutely dragging the listener through the sewage grinder on opening kinda-title-track “Impetus Of The Dead”, a song that brings to mind Abscess and Demilich all at once, which I can definitely get behind.

Then the band makes the wise of move of having an even heavier, slower, more oppressive slog, something called “Sortilege” that approximates total annihilation more than it does a song, as the second track on the album. It almost starts to feel like every song is actually heavier than the last in different ways as this monolith carries on, which is precisely how a killer death metal album should sound. The band drop some ominous melody late in the album in “Forlorn Burial”, and it's an incredible mixture when they go from that to blastbeat-driven grinding death metal. Then huge closer “Starless Event Horizon” just leaves no one breathing by the time it lumbers to the finish line; incredible way to end the record. They've got the riffs, they've got the vibe, they've got the feel... aside from having a name I can cope with, Corpsessed have it all. One of the best death metal albums this year, hands down.