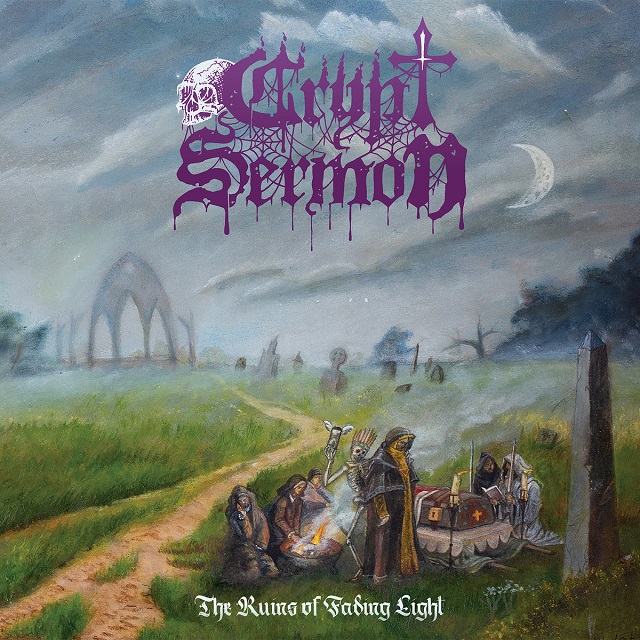 Follow-up to the '15 debut, which made my year end, Best Of tally. Despite the deadly sounding/looking moniker/logo, the Philly doom merchants offer ten surprisingly spirited tracks, spotlighting the foibles of religion and finality of death. That said, this isn't some collection of slow, wallowing hymns. Far from it! First off, Brooks Wilson's voice is not the usual booming baritone that accompanies such music, but rather normal, with a slightly strained/higher timbre. For the true underground diehards, there are moments that recall Germany's Atlantean Kodex, or, a little closer to home, the initial pair of Rob Lowe (ex-Candlemass vox) Solitude Aeturnus albums. Yet, there's truly nothing like Crypt Sermon, in total.

Needless to say, the sum is greater than its parts, meaning this is less about individual songs and the mosaic of an album, as a whole. Opening “The Ninth Templar (Black Candle Flame)” sets the table, with unexpected clickety-clack vim and dueling six-strings that Candlemass would approve, if not envy. It's not the last time that comparison can be invoked. “Key Of Solomon” gently applies the brakes, yet still has space for (at least one) searing guitar. There's an epic, old Gothic feel (in the King Diamond sense of the word, not Sisters Of Mercy) to “Our Reverend's Grave”, complete with lively guitar run. Sound effects (is that a flute?) begun “Epochal Vestiges” is the first of three approximately 90 second interludes. This one segues into “Christ Is Dead”, a lengthy construct with ample opportunity for the twin guitars to show their stuff, between the meandering, intertwining melodies. An almost gallop (punctuated by echoing “ah, ah” intonations) greets “The Snake Handler”. Ultimately, it ends with Wilson a cappella. An acoustic “Oath Of Exile” (recurrent underpinning of horses galloping) and voiceover, hand drumming and more flute laden “Enslave The Heathens” last little more than three minutes, combined! Crushing weighted “Beneath The Torchfire Glare” returns to full-blown song ideas, the titular phrase oft repeated during the more conventional “doom” infrastructure. The liltingly begun, 8:51 finale of a title cut includes a smattering of harp, hurdy-gurdy and tambourine, courtesy of Tanner Anderson (Obsequiae), as Wilson “soars” above all. In a word, epic. Intriguing, young band. Support!