CRYSTAL VIPER - Queen Of The Witches 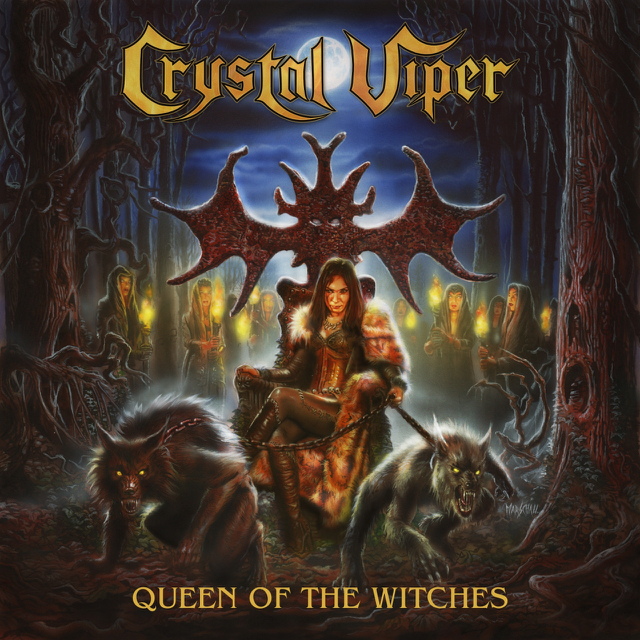 Sixth album from female fronted Polish act. Didn't realize mainstay guitarist/singer Marta Gabriel had some health issues that temporarily scuttled Crystal Viper, back in '13. She's also responsible for constructing stage outfits for the likes of Sabaton, Wolf and Vader. Talented lady! So right out of the box, a piercing scream greets a speedy “The Witch Is Back”, the gravel throat lyricist seemingly in fine form as the traditional metal anthems race behind her. The mindset is such that the CD/vinyl bonus tracks are “See You In Hell” (Grim Reaper) and “Long Live The Loud” (Exciter), respectively. Musically, the Poles are currently a mix of those two entities, keeping the Brits' sense of melody, but speed and attitude closer to the Canucks, without being thrash/speed metal.

The mid-tempo plod of “When The Sun Goes Down” recalls her mentor, Doro Pesch, but the slow, lone piano accompanied follow-up “Trapped Behind” gives Marta a chance to show off her vocal (nearly a Capella) prowess, even if it's not a metal song. After this mid-album respite, it's back to basics. Ross The Boss (ex-Manowar) lends his axe to the galloping “Do Or Die” and Mantas (Venom Inc.) blazes away on “Flames And Blood”, the cream of this crop. A gritty “Burn My Fire Burn” is traditional, ‘80s flavored metal, which Crystal Viper do so well. More piano in the “We Will Make It Last Forever” power ballad, before “Rise Of The Witch Queen” closes the proper record in heads down, fist thrusting, Euro festival glory. Sadly, one of those bands that deserves greater recognition on these shores. Perhaps now is the time?