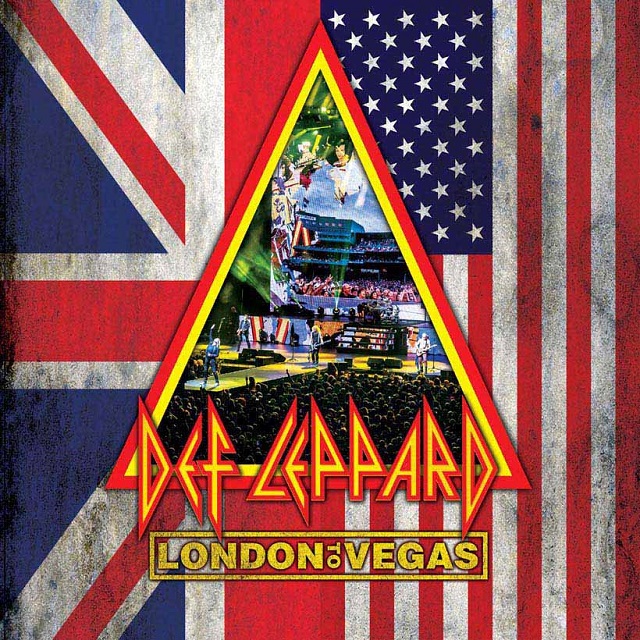 Truly a treasure trove for Def Leppard fans, this 2 Blu-Ray (or 2 DVD) + 4 CD collection houses the video and audio from two concerts, providing just over four hours of musical immersion. Up first is Hysteria At The O2. Filmed in London, England in December 2018, Def Leppard performs their best-selling album from 1987, Hysteria, live in its entirety. A giant video screen is situated behind drummer Rick Allen, with additional, smaller screens running all along the drum riser, as well as overhead above the lighting truss, assuring everyone in attendance at this indoor arena can see the band in all their glory. It’s a good thing too as the stage is surprisingly dark. Being the seasoned live veterans that they are, Def Leppard sounds really good, very well polished. A shirtless Phil Collen is constantly changing guitars, Rick Savage’s bass packs a punch, and while taking it all in, you realize just how essential the backing vocals from Collen, Savage, and guitarist Vivian Campbell are, in addition to Joe Elliott’s lead vocal. Hearing lesser known songs “Gods Of War” and “Run Riot” is really enjoyable. After wrapping up album closer “Love And Affection”, the boys briefly adjourn for a quick wardrobe change, and return for a five song encore highlighted by “Wasted” from On Through The Night, as well as must-plays “Rock Of Ages” and “Photograph”.

The second concert, Hits Vegas, Live At Planet Hollywood, was filmed during Def Leppard’s Sin City Residency in August / September 2019 inside Zappos Theatre. An enormous 28 songs are on the list. Again, it’s not the brightest lit stage, but there is a video wall. Campbell shines on “Too Late For Love”, Elliott struts his stuff during “Slang”, “Promises” simply surges, “Let It Go” provides an adrenaline boost, and “Switch 625” is killer! It is rather strange however, that the monitors and microphones are set mid-stage, making the band’s default position distant from the fans at the front. Then comes the softer side of Def Leppard. Joe straps on an acoustic guitar and the guys take a seat at the end of the catwalk, where they bring it down a notch with four unplugged songs, including the rarely performed “Let Me Be The One” and “We Belong” – which features the entire band sharing lead vocals. As the group returns to their perch, the mellow vibe continues with “Now”. “Rocket” ramps up the energy level as they cruise toward the same finale found on Hysteria At The O2 with “Rock Of Ages” and “Photograph”. So, yes, there is some song repetition between the two shows, but that’s essentially unavoidable.

Both Hysteria At The O2 and Hits Vegas, Live At Hollywood have 11-minute bonus features attached. Similar in nature, they showcase interviews and behind the scenes footage, ranging from stage construction to rehearsal and soundcheck, providing an insider’s look at the vast production required to make these concerts happen. Adding extra value is the inclusion of a 40-page hard cover book.