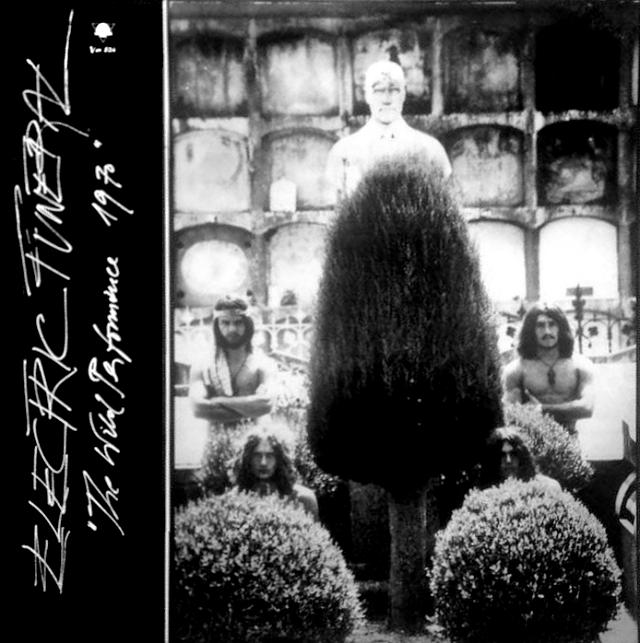 Lovers of proto metal obscurities will bask in this one, 1970 rehearsal tapes from Switzerland’s Electric Funeral, who had a very heavy name (amazingly, no, they claim they didn’t take it from the Sab song), logo, and sound. Although the band never released an official album, The Wild Performance was released in 1991 and is now seeing reissue as a double LP with four bonus tracks, all from 1970 except for one, from 1973.

Opener “People” actually rocks hard and proto-punk, the band dipping through Detroit for a fun, clanging rocker with a great riff and upbeat rhythm. Then it’s into Drab Four turf with “War Funeral Song”, which stays mainly slow and builds hard, the band exploring dynamics with success with this great song. “Black Pages”, again, man, I hear great potential here for this band to be the Sabbath Jr. that never was on songs like this massive rager, which threatens to get blues hokey but instead gets down-right doomy and builds with a very Sabbatherian drama to it. “Rock Ba Rock” picks up the pace a bit and is impressive because here we are, four songs into an archival proto-metal release and things have actually stayed heavy; no sudden dips into blues or bubblegum pop or the usual things these bands did, showing Electric Funeral actually had metal coursing through their weirdo veins. The sound quality is a bit dodgy, but it’s actually not bad, considering this are rehearsal tapes from so long ago, and the whole thing goes on for a bit too long (indeed, many of the band’s songs could be a few minutes shorter, although some, like “Fly Away” use their runtime perfectly), but such is the nature of archival releases like this; it’s not necessarily meant to be a start-to-finish album experience, but rather an exploration into a band that, if things had worked out just a bit differently, would most certainly be talked about more in metal circles today.