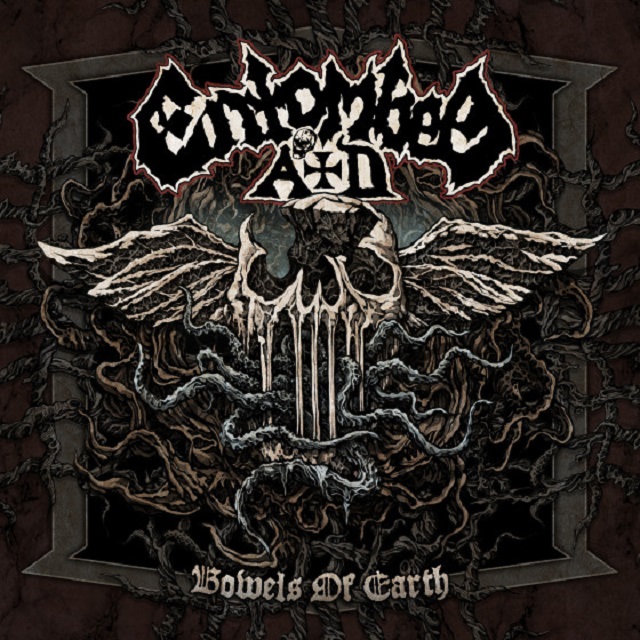 When an album kicks off with a nasty cough and contains a song called "Bourbon Nightmare”, well you know it’s right up my wheelhouse. In all seriousness, the history of Entombed minus the A.D. has left a deep impression on me as an extreme music fan. And I gotta say, having a swig of vodka with LG Petrov prior to their Summer Breeze set a few years back ranks as one of my ultimate moments in this biz. But man, despite his fun-loving fire and gurgling demonics, deep, deep inside I wanna see a proper reunion with drummer Nicke Anderson and guitarists Alex Hellid and Uffe Cederlund. As the classic Entombed song says, “But Life Goes On”, and it has for LG, this being the third platter as seemingly he gave up hope reuniting and plundered on with a new set of death-defying musicians.

No word of a lie, Bowels Of Earth could be the logical follow-up to 1997’s DCLXVI: To Ride Shoot Straight And Speak The Truth. It hearkens to a distant past, but builds on a new level of Swedish born and bred mastery. And yes, the "Torment Remains”, LG just pillaging through the wreckage like any fit and ferocious warrior. With "Elimination” blast-beating, "Hell Is My Home" soaring with its crowd-surfing chorus and “Fit For A King” moshing into “Worlds Apart” - fitting nicely beside anything on Wolverine Blues by the way -  Bowels Of Earth will appease the most diehard Swedish death metal fan as LG fights onward with eyes in the back of his head. The Hank Williams cover "I’ll Never Get Out Of This World Alive" was pretty much written for him and it’s one of two covers if you obtain the limited edition version. And alas, “Back At The Funny Farm” is another perfect fit (I mean perfect day) as Entombed A.D. wrap their heads around one of Motörhead’s most triumphant albums! The title track ”Bowels Of Earth" commences with a melancholic piano intro until the madness begins and the chorus takes your throat and the soaring lead break feels like you are being dragged behind a galloping horse. The grand finale ”To Eternal Night" has tears of blood running down my face, as the harmonious leads take the outro of Left Hand Path to different heights. Nearly six minutes of glory, LG’s curdling voice complimented by a choir of deathly angels. Chilling…