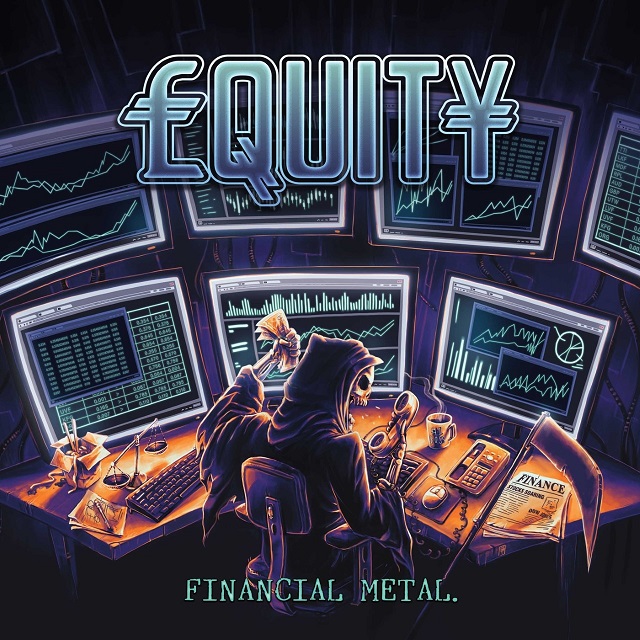 If it's a joke, it's a good one. Virtually no info available about these gruff throated thrashers who have composed ten odes to Wall Street finances. You read that right! Tongue planted in cheek for numbers like “Brexodus”, “Buy Low Sell Die”, “Disposable Income” (one of two bonus cuts) or “Figure It Out”. The band logo incorporates symbols associated with both the Japanese yen and British pound. Would be funny if Equity turn out to be some moonlighting financiers!

The opening “Debt Cult Machine” contains a spoken word/news report decrying the state of the American dollar and its citizens lack of savvy when it comes to money and includes lyrics like “deeper and deeper in debt, interest compounds, garnish the wage...” Nice guitar work through the otherwise pedestrian thrash of “Buy Low Sell Die”. A female news reporter breaks into “Blue Chip Liability” (which also contains a spirited trip around the drum kit), to bad mouth Bitcoin. Apart from the ubiquitous gravel voice, this one strays into traditional metal structure, complete with Maiden-ish six-strings, including a subtle, twin lead (double tracked?) section. Speaking of old school compositions, “The Return Of Equity” kicks off with extended guitar intro, vocals not appearing until the 5:37 is almost to its midpoint. “Panama Papers” talks about the 2015 leak of information on secret offshore accounts. A slower, atypically twisted guitar greets the marching tempo “Brexodus”, a 9:13 instrumental. “Disposable Income” mixes metal/financial metaphors with lyrics like “no gun to your head... victim of the times in which we live”. Disc closing “Excess Asset Acid Test” rides an infectious bounce. Definitely not common stock.