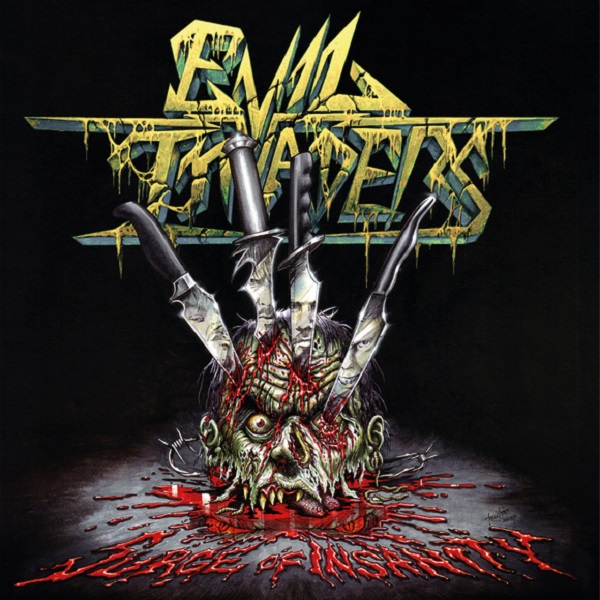 Having witnessed the Belgians on several occasions, can attest they're one of the fresh faces that connect with thrash fans, new and old. Joe's gruff, then suddenly high pitched vocals are almost as quirky as his angular mutton chops, but the quartet deliver high energy speed metal, start-to-finish, as this live testimonial (sampling the introductory EP and both full-lengths) demonstrates. There's an action packed, albeit darkly lit, accompanying DVD (80 minutes, all live footage, no interviews/insights, etc.) In addition to the Evil Invaders originals, there's also a cover of Venom's "Witching Hour".

Although playing to a "hometown" crowd, what little of Joe's banter that is included, wisely opts for F-bomb laced English, given the international release. After a trio of all speed offerings, "Mental Penitentiary" adopts a rhythmic Anthrax-ian (pun intended) approach, although with more vim and vinegar than Scott Ian's outfit has ever possessed, band downplayed/forgotten debut included. In contrast, there's the mid-tempo, fist thruster, "Broken Dreams In Isolation”. Never content to stay motionless for long, musically, or onstage, the tune soon enlivens, but not as frenetic as either the already aired "Pulses Of Pleasure" or forthcoming "Loud, Fast & Rude". Onstage, the track is augmented with pyro eruption of sparks. The most recent title track, "Feed Me Violence" return things to blazing guitar normalcy. Heavily Iron Maiden influenced "Stairway To Insanity" ends with a nearly five minute, all-out instrumental jam, of which Steve Harris would undoubtedly approve. Follow-up "Among The Depths Of Sanity" is another example of light and shade. Blinding strobe and smoke filled stage characterizes "Oblivion", which ends with short drum solo, seguing into "Master Of Illusion" which sports more of Joe's piercing yelps. A bit of Maiden in the construct, the audience sings the titular chorus. Despite the fast riffs and aggression, there's a traditional metal sensibility to the guitars (including the odd solo/run). For the short Venom cut (which ends the proper set), the stage is shrouded in fog, along with rapid edits between cameras, almost as quickly as the blitzkrieg of strobes.

Returning to the stage for an encore, we're greeted with the hornet hive buzzing of the aforementioned "Fast, Loud & Rude". The final pair offer no let up, just as vicious as the start, more than an hour before. Rare that an (live or otherwise) maintains this much energy. Been ages since a live disc was this exciting!