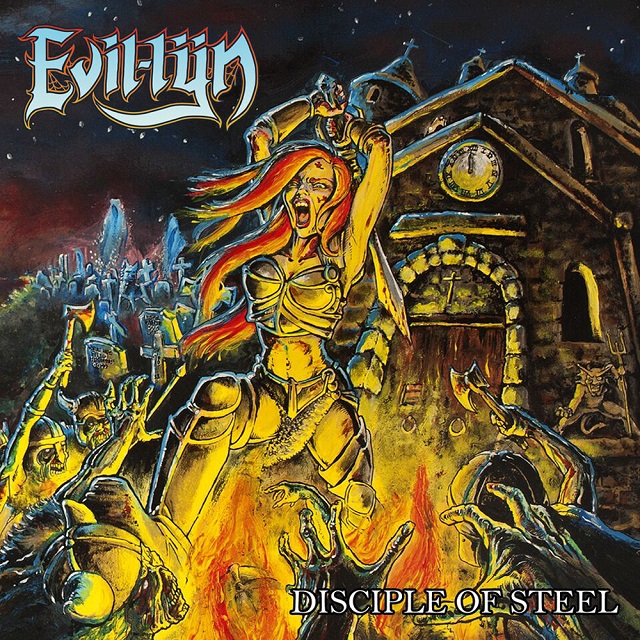 Umlauts over the Y, this Finnish lot serve up old school traditional metal. Another review succinctly summed it up as "Brainless, but badass," which might be a little harsh, as it's infectious, no frills, double guitar music with a gravelly, accented voice, similar to Peavy Wagner (Rage), especially on slower moments, like "Iron On Iron" and "Last King Of Thunder". Lyrics for the eight tunes are sword & sorcery fantasy stories, none more grandiose than the spoken word dialogue introduced "Valley Of The Dead Witch", which closes the album.

Warning sirens and an uproarious throng greet the ripping "Survive the Night" opener. Can see this as the live kick-off. Like-minded "Hellfire" follow-up is no slouch either. While the target is NWOBHM/80s Euro metal, unlike so many neo-traditionalists, Evil-lyn doesn't overtly wear the influences on their sleeve. If pressed, would say the plodding stomp recalls Grand Magus, although a hint of Iron Maiden appears in the rollicking gallop of "Tengel". Neo-classical shredding for the title track recalls contemporaries Holy Grail. The initial half of mid-tempo jangly guitar "Shadow Soldier" (hey, Mark Tornillo/Accept might have something to say about that title) is atypically non-metallic (similar to Shinedown or Maroon 5), but the guitar brings back respectability. Plenty of great new metal exists, just have to know where to look, like BraveWords.com