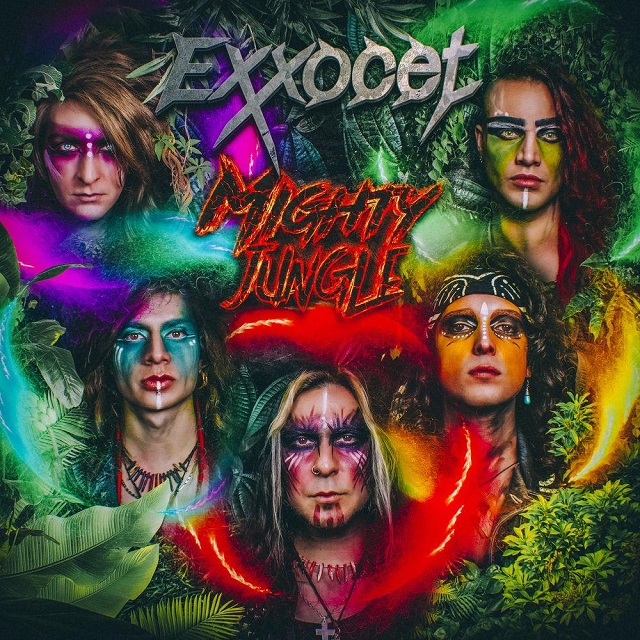 Sophomore effort from glam loving, Santiago, Chile based youngsters. The multi-colored make-up (each of the five guys a different hue) is somewhere between Aztec face-paint (and feathered headdresses) and early Cloven Hoof (back when each represented a different element: Earth, Water, Fire & Air). Three years ago, reviewed the Exxocet debut, which wore the Sunset Strip influences prominently on their collective sleeves.

Instrumental intro “Enter The Jungle” is a mix of natural animal sounds (warbling toucans and grunting apes) that morphs into staccato drum patterns, before leading directly to “Cannibal Carnival”. The first proper tune is one of the best, an infectious slice of upbeat ‘80s pop-metal, residing nicely between MTV era Van Halen and Extreme, complete with blazing guitar solo. A Skid Row meets GN’R shuffle, with unnatural, seemingly helium induced falsetto, characterizes the keyboard and cowbell laden title track. The band are best when keeping things fast and light, as with “Alive”, as opposed to the requisite power ballad, “Goodbye I Say My Love”. “Night & Day” is a saccharine throwaway, whereas native tongue “Tal Para Cual” owes a debt to East Coast entities like the aforementioned Skids, Spread Eagle and/or Kix. After another poppy, bubblegum “Summer Nites”, the guitar returns to prominence on “Screams From the South”. Generic appellation, but strong “Rock & Roll” finale bookends nicely with the proper opener as the style the Chileans should focus on. Finances and location probably preclude it, but would be well served to open for Steel Panther (without the overt sexist overtones).

After a strong start, second half of the album is a bit of letdown. A little more time writing superior songs would have added a few points to the overall score. Still, those looking for a summertime (girls?) throwback will find some enjoyable moments.