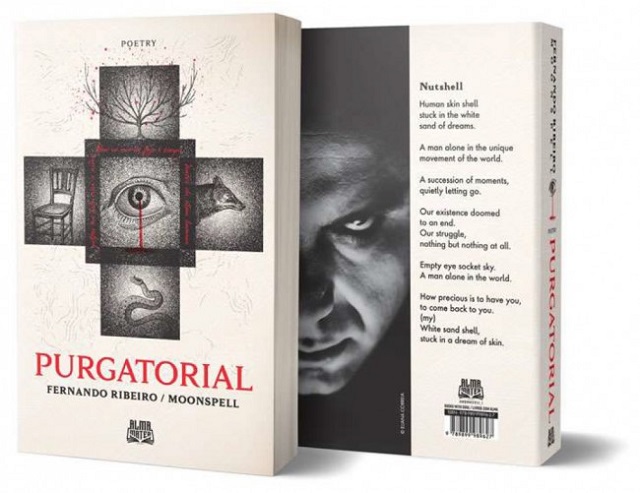 “Poetry is for pussies...” is not the way to start a conversation with Moonspell frontman Fernando Ribeiro, the author of Purgatorial. He’s been publishing dark and doom-laden verse in his native Portuguese for almost 20 years and Purgatorial marks his first foray into putting his art out in English. Initially marketed as a translation of his works, Ribeiro admits Purgatorial features re-worked poems and passages from his four volumes of work rather than “simple” renovations.

The poetry is very Moonspell on the surface - dark - but this is not your high school’s Iambic Pentameter. Some are barely a page or less, while other passages like the unexpectedly positive-ish "Things For Today" runs for four pages. Curiously, Ribeiro includes an unsettling piece entitled "War Ensemble (Slayer)" which shares the theme of war and death with the classic Slayer song of the same name. And quite unexpectedly, "Vox" and "In The Night Of My Sleep It's Broad Daylight" have become favourites.... and I'm not a poetry fan.

Ribeiro’s style flows from line to line, rhyme scheme be damned however rhythmic his verses are, dragging the reader into tales long and short of love, sex, death, desire, survival, travel, murder, dreams and introspective thought. Fans of doom goth culture with a taste for literature will feel at home within the walls of Ribeiro’s vault, but as a simple fan of reading and dedicating grey matter to song lyrics it’s hard not to absorb and enjoy his work. Morbid yet thought-provoking, Purgatorial does exactly what it’s meant to do: take you on a journey, after which you reflect on which stops along the way you liked best.

It’s been years since I attended a poetry slam. I’m sorely tempted to do so with Purgatorial in hand, bent on scaring the hipsters in the audience.