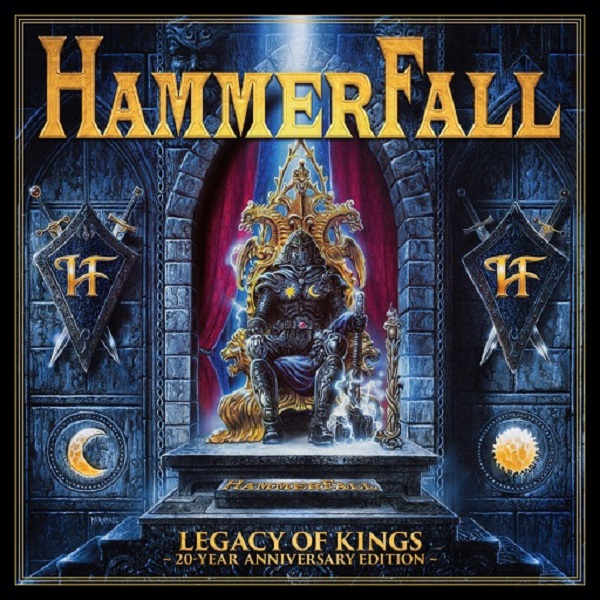 Let the hammer fall! A young, gunning Swedish heavy metal squad HammerFall was out to conquer the world after an impressive debut (‘97s Glory To The Brave) and Nuclear Blast has graced with a robust 20th anniversary edition for Legacy Of Kings. Hard to believe it’s been that long, but here we are with the full album intact along with a second disc of several covers, live tracks, and rehearsal demos, followed by a DVD featuring an interview with the all the members that performed on this album and some early live performances. The extensive linear notes impressively detail the making of the album along with some vintage photos to coincide with the retrospective. Point blank – if you’re new to the hammerheads or a longtime fan, this is a must purchase.

Giving this a fresh listen, “Heeding The Call” might be the band’s best opener ever, and that’s saying a lot considering they always start records up with a strong salvo. You can hear the youthful exuberance of vocalist Joacim Cans and how the Swedes were already constructing vocal parts perfect for the live audience; like the concert staple “Let The Hammer Fall”. There are true speed metal gems like the title track and “Dreamland” as it remains one of the most consistent outputs from the Swedes.

The second disc holds some cool cover renditions of Picture (“Eternal Dark”), Helloween (“I Want Out” with Kai Hansen), and Rainbow (“Man On The Silver Mountain”). These covers can be found on single releases that surrounded the release of the album. Also to be found are recent live editions of the album tracks with the highlight being a medley of tracks; anyone who saw HammerFall on their most recent tour will recognize it. The disc closes with six rehearsal demos and while they make for an interesting listen once or twice, the produced version album version is going to be the one listened to most.

The DVD is the cream of the crop featuring a new interview with the band reminiscing about Legacy Of Kings and also vintage footage of them performing and documenting their travels on tour, a listening session for Legacy Of Kings, and a release party featuring Udo Dirkschneider singing some Accept classics and Mikkey Dee on drums.  The HammerFall fellows are known for being goofy, funny guys and a lot of that personality is shown throughout these videos. By far the best footage is the U.S. footage of them touring with Death, which includes a hilarious video of them going to Waffle House together. It shows what a crazy character drummer Richard Christy is and also provides some cool moments with Chuck Schuldiner. This DVD is like a taking a time machine back to that era and it’s a joy to take it all in.