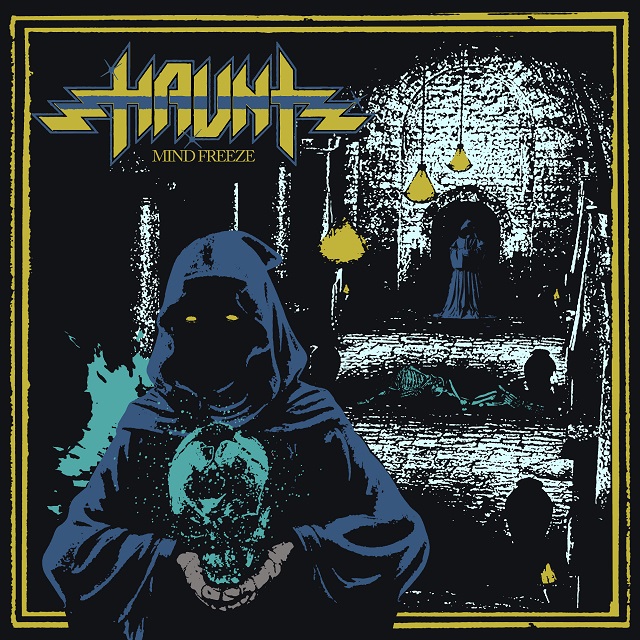 Is there a hotter heavy metal band in the world right now than Haunt? Working at a frenetic pace, Trevor Church formed this mystical, traditional metal act in 2017 and in this space of time has come two EPs, two splits, and three full-lengths. I adored 2019’s If Icarus Could Fly and it was my album of the year and it’s very possible Haunt could take the crown for 2020 as well.

With Mind Freeze, Haunt has added a new dimension to their sound with the use of synthesizers and they provide the cold, icy feeling the album generates. I get visions of the theme song to the Netflix show Stranger Things as it’s a fantastic pull-in and mood enhancer as I feel like I’m pulled into the frozen world illustrated on the cover.  Church also seems much more comfortable as a singer and uses adept melody that leads to some enriching vocal moments. While that traditional metal element is still strongly on display, there is some gravitations toward power metal as well, like on the surging “Divide And Conquer” (with an incredible tempo change in the middle) and the speeding and fist-thrusting “Hearts On Fire” (although it’s hard not to think of the HammerFall song when listening to this). The most impressive part of Haunt though is developing sturdy, melodic, memorable guitar parts and the guitar tandem of Church and John Tucker is a marvel to listen to. There has always been a melancholic vibe to Haunt, and this is in due part to the desperate vocals of Church, but there is this sense of heroism and wonder and this is enveloped in opener “Light The Beacon”, which shows a glimmer of hope with tributes to those that have fallen, and also “On The Stage”, a song that says exactly what it is, an ode to performing on the stage and bringing joy to the metal masses.

It’s incredible how these guys continue to dazzle and knock it out of the park. The use of the synth has unlocked new possibilities and while Mind Freeze has icy flavors, it will burn in your veins and get the metal heart pumping.