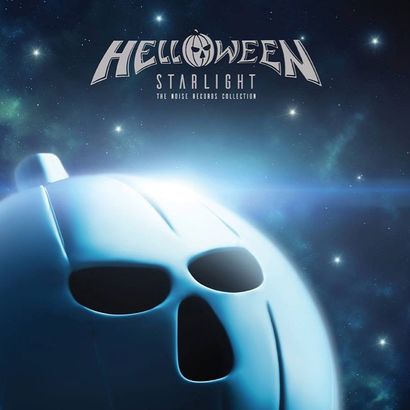 Nothing wrong with celebrating the classic era of Helloween is there? With the Germans reuniting with vocalist Michael Kiske and co-founder Kai Hansen for the successful Pumpkins United tour and a reunion album plotted for 2020; it seems Noise Records wants to carry the momentum and attention by releasing this robust vinyl box set. While the pessimist might see this strictly as a money grab; there are certainly some worthwhile items here for the collectors and perhaps even someone new to the pumpkin parade.

Included in this set is a Helloween slipmat (very cool), a double sided poster – one side depicting a classic group shot and the other the artwork of this box set, and six albums each on colored vinyl for the very first time. The full-lengths included are the Wall Of Jericho debut and Keeper Of The Seven Keys Parts I and II. These three albums are taken from their initial 2015 vinyl reissues and remasterings and are no different aside from the vinyl being colored. Music wise, there isn’t much to say; this is prime, massively influential German power metal that is a must listen for any metalhead.

The other albums included is the hallowed Helloween debut self-titled EP, the “Judas” single, and a revised version of the 1991 compilation The Best, The Rest, The Rare. What makes this version different from its initial release is a different tracklisting with four rarer songs included. It seems Noise was trying to limit the amount of repeat songs that are already found on the other albums included so newer additions are “Oernst Of Life” and “Metal Invaders” from the legendary 1984 split album Death Metal and the Michael Kiske sung renditions of “Starlight” and “Victim Of Fate”. The worst decision though was including the radio edit of “Halloween” and not the full song. As for the “Judas” single and Helloween EP, this is the first time they’ve both been reissued on vinyl since their first release. With the holidays around the corner, this could be a worthy investment for the pumpkin maniac in your family.