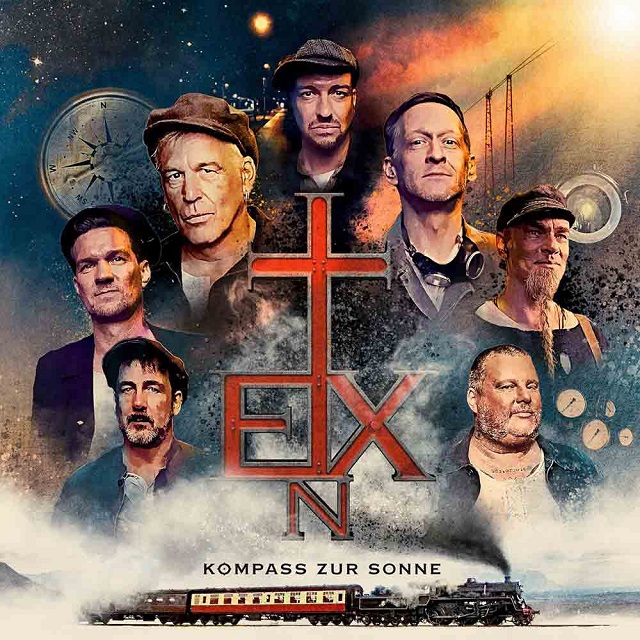 Been 20 years since the eclectic German outfit set foot on US soil (old NJ Metal Meltdown, unbelievably, just a few miles from my home!). However, have seen them regularly, at summer festivals overseas and live is truly where you need to hear/see/experience their native tongue sung tunes. The visual spectacle is as much a part of In Extremo as the bouncy anthems (with lyrics that I really can't understand): the haircuts, the costumes, the oversize medieval instrumentation ...it's a party for the senses. You think the hurdy gurdy is eccentric? Check out the five foot long horn/bagpipe combinations that bookend the stage and dance about!

Need further proof? Look no further than opening "Troja". It begins with lone, rumbling bass than becomes a frenetic, jumpy number that alternately employs bits of symphonic strings, plucked harp, sleigh (or should that be slay) bells, and those omnipresent horns. The more mechanized title track might remind one of a certain big name Teutonic industrial act, named for a US military base, apart from the re-introduction of those jovial, whining pipes. Keeping it light, with punky marching tunes, is what In Extremo do best (at least from the perspective of one incapable of discerning the deeper meaning of any lyrics), something like "Lügenpack", while gruff vocalized "Gogiya" resides somewhere between Russian folk songs and the Finnish humppa music. The fact Korpiklaani (and similar minded countrymen) have been able to translate their sound to non-speaking crowds worldwide means there is a possibility of greater acceptance for In Extremo (if they want it). However, their age (older bands are less likely to take "chances" to establish themselves in new territories, which frequently requires playing to smaller crowds than they're used to, and at a reduced payday), plus the sheer size (the onstage contingent is at least the seven regular members, with occasional extras), it seems unlikely at this juncture of their career.

Upbeat, pipe bleating offerings like "Biersegen" (introduced with hurdy gurdy and what appears to be the Australian didgeridoo) aren't too far removed from the aforementioned Finns and "Reiht Euch Ein Ihr Lumpen" owes a nod to New Model Army. Slower, with moan of cello "Schenk Nochmal Ein", is a stylistic departure, fine for record, but wouldn't want to see this momentum breaker performed live. Interestingly, "Saigon Und Bagdad" seems to mix modern electronic dance effects with the band's "old school" approach, even utilizing a modulated guest (child) vocal. A full-blown "Club Mix" bonus is provided, on the album's expanded version. Harpsichord introduces the more sober "Wer Kann Segeln Ohne Wind", sounding like a Christmas carol, prior to the Sesame Street monster gang vocals. Recorder (penny whistle?), jingle bells and fiddle all appear within a tribal, guitar driven "Salva Nos". Something for everyone and lots of things no one has ever thought of, as well. Take a walk on the wild side!