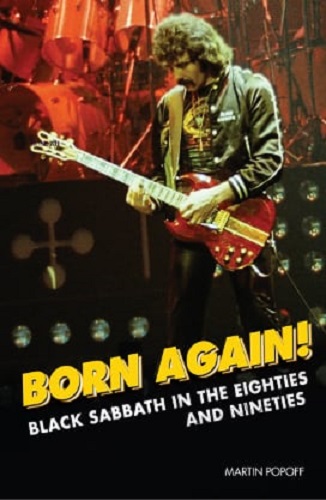 I've long had a fascination for legacy bands' blind spots: those eras/albums/lineups that you just forget about, the duds, the mistakes, the regrettables. Man, they're the kings, but Black Sabbath has a lot of the above, two decades ballpark of just fucking around, no amount of Wikipedia/Metal Archives cross-referencing being able to sort exactly who was on what album, or even what albums exist to document said blind spots. So I must say that dedicating a whole book to this era of the drab four is brilliant, Martin Popoff—author of around 9,000 books about metal—diving deep into albums that we damn near forgot exist, talking to the main players (and, even more enjoyably at points, the ancillary dudes) behind said albums, trying to make sense of it all. And I love the sense of exhaustion and amusement that you can just tell Popoff is valiantly trying to hide as he tells this at times absurd story, but how can anyone write about this comedy of errors and not at points just throw up their arms?

Popoff picks it up in 1980, right when things with the original lineup were crumbling, and walks us through every miserable album, every doomed lineup, every dysfunctional relationship in what is one very dysfunctional family. Man, you get the sense that a few of these guys are nice and a few... well, it makes sense why the lineup changed so much. Dio comes across like he thinks he's the king of every castle, which is a bummer, and the amount that the guys in the band contradict each other in these stories is astonishing. Was anyone ever even in the same room together? I guess looking back through the decades is tough and stories aren't always gonna line up, but Detective Popoff does a great job piecing it all together, even when what he has to present to the readers is at times a sort of sad tale of business over any sort of us-versus-the-world camaraderie... man, apart from the original lineup it just sounds like ships passing in the night here as far as any sort of connections go. I get the feeling that Tonys Iommi and Martin could pass each other on the street and just barely recognize each other (I can see it now: “Hey, mate, do I know you?” “No.”), despite recording what actually amounts to a pretty sizeable catalogue of records together. I've read a lot of books about metal, and this is right up there with the most engaging and fascinating of them, Popoff laying down the definitive document on a super weird couple decades for one of the most legendary metal bands of all time.