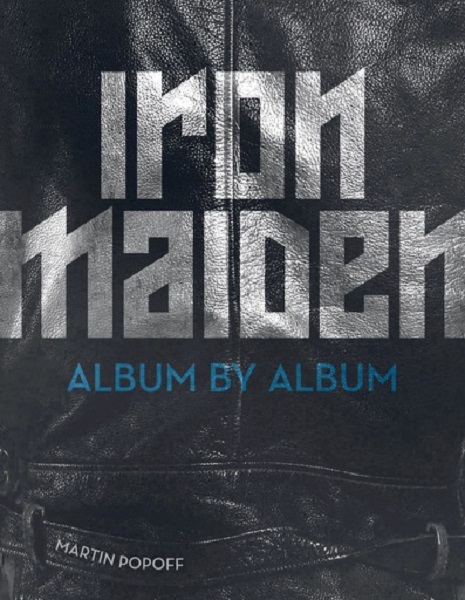 Again, the author Marin Popoff (BraveWords), journalist, and more importantly long time heavy metal listener and fan, delivers another well written book documenting an artist, and/or piece of metal music history. Like his other books, Martin is a master of combining facts with visuals, and presenting everything chronologically. This makes for not only an easy read, but answers many questions, and connecting the dots from year to year. This way also allows the reader to go back to previous chapters (or era), for pieces of information, quotes, or visuals.

For this Album By Album, Popoff begins each album with a summary of general facts, tracklisting (with songwriters), lineup, artwork, and what else was happening at the time in metal music, or with the band members – like side projects. Then he includes comments from interviews with several musicians, these from either the Maiden camp (ex-singer Blaze Bayley), or other bands, to now the popular online YouTube channel journalists like Jimmy Kay from the The Metal Voice. And of course, “Metal” Tim Henderson, the captain of the metal ship at BraveWords magazine. Plus, it’s interesting to hear the perspective from two long time Iron Maiden fans, Rich Davenport and Franc Potvin on songs, tours, etc.  Famous musicians include Bobby Blitz from Overkill, ex-Megadeth guitarist Marty Friedman, wrestler Chris Jericho, and ex-Dream Theater drummer Mike Portnoy, to the perspective from the younger ‘90s/2000 generation and Matt Heafy of Trivium.

Now while I enjoyed reading about, and learned, from each album, I wanted to point out the chapter on Killers, for a few reasons. One - as far as songs from it played live (along with Somewhere In Time), it is grossly neglected. Aside from the Early Years tour setlist, “Wrathchild” only gets love. Two - with that, the cover art yet is one of the most popular and seen shirt designs for fans to represent. Why doesn’t the band take this into consideration when picking a setlist? Three, how and why were the two singles from it – “Purgatory” and “Twilight Zone”, dropped from the setlist since the Beast On The Road tour in 1982? Three questions yet unanswered. What did I learn from the book about this era? ”Prodigal Son” and “Murders In The Rue” are the only two new songs. Everything else was previously written and had been played on tour. And former singer Paul DiAnno was not happy with the album, felt Martin Birch’s production was too polished and it lost the punk rock rough edge from the debut.