Murder In The Front Row 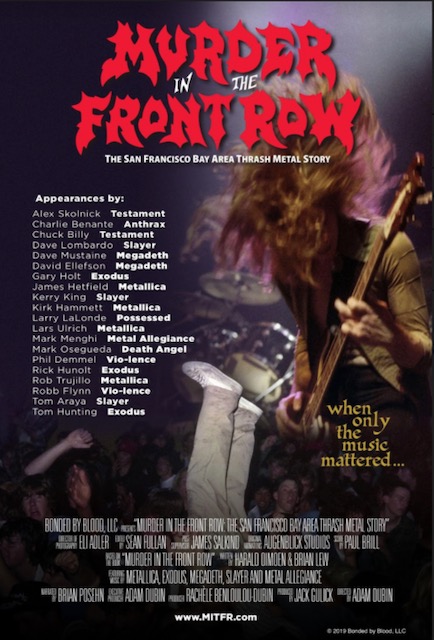 This informative and entertaining 92-minute documentary, directed by Adam Dubin (Beastie Boys, Metallica), focuses on the Bay Area thrash metal movement of the early ‘80s. Although San Francisco and Los Angeles are both located in California - the 380 miles, or five-and-a-half-hour drive - that separates the two cities resulted in vastly different scenes. The teenagers in San Fran had no interest in the glam rock that populated the Sunset Strip (Ratt, Mötley Crüe, Dokken). Instead their musical interests lie with bands situated across the Atlantic, such as Diamond Head, UFO, and Iron Maiden. This heavier, faster music combatted suburban boredom; unfortunately, those groups rarely, if ever, toured the west coast of America. As a result, an underground network of tape-trading, fanzines, and pen-pals, furthered along by a couple of cool record stores, forged a real sense of community, with these kids creating their own version of the music they so lovingly embraced.

Behold - Metallica, Exodus, and Slayer are born. Although Murder In The Front Row features numerous exclusive interviews with members of other notable Bay Area thrash bands including Testament, Megadeth, Possessed, Death Angel, and Vio-lence, as well as New Yorkers Anthrax, it’s the focus on, and commentary from Hetfield and Hammett, Holt and Hunting, as well as King and Araya that are the centerpiece of this well-paced film that is of utmost interest to metalheads worldwide. Plenty of old photos, combined with Brian Posehn’s narrative, make viewers feel like they actually experienced the legendary shows at seminal night club Ruthie’s Inn. A touching tribute to late Metallica bassist Cliff Burton is paid; yet after that tragic accident, Murder In The Front Row fast-forwards to modern day, skipping over countless thrash metal milestones. For example, Burton’s replacement in Metallica, Jason Newsted, is not mentioned at all; and he was in the band for 15 years. Yet current Metallica, and former Suicidal Tendencies bassist Robert Trujillo is showcased prominently. Seemingly, the aspiration is to show that these bands have grown from Bay Area underdogs to globally respected acts. The jump is abrupt, but forgiven, otherwise it would be a four-hour film.

Bonus features run as long as the actual movie itself; another 92 minutes of interview clips that initially hit the cutting room floor, as well as a glimpse at the film’s first public screening. The packaging, designed by Rodney Bowes, certainly deserves credit. This is no ordinary plastic DVD clamshell! Murder In The Front Row is housed in a tri-fold digipak covered in vintage photographs, complete with two double-sided mini posters, a sticker, and slipcase. Equal parts history lesson and haul down memory lane, Murder In The Front Row will make killers of us all.