NECROPHOBIC - Dawn Of The Damned 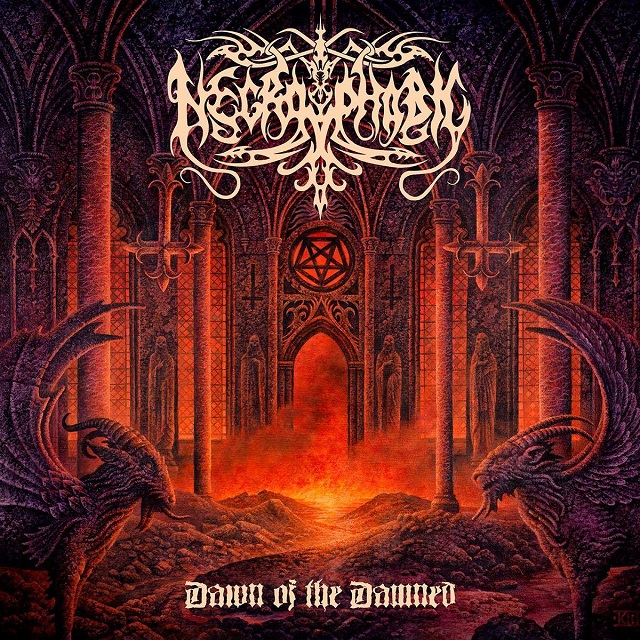 Hard to believe these Satanic Swedes have been at it for more than 30 years! Studded and bullet-belted, they may look like countless others, but lately, there's an undeniably strong sense of guitar melodies cutting through the hellish din. This one walks the fine line Dimmu Borgir once trumped, a sincere head kicking, with "commercial" appeal of memorable rhythms that could help it transcend beyond the diehard black metal enthusiasts. No easy feat and one that always threatens to upset the kvlt apple cart. I suspect that may, in part, be due to the guitar tandem having spent some time with more traditional sounding outfits (especially Black Trip/VJOD) prior to a second stint with Necrophobic.

After the grandiose "Aphelion" intro, it's down to business, for nine proper slices of devilry. The one-two punch of "Darkness Be My Guide" and "Mirror Black" falls between the heavier (albeit melodious) musical end of Vader and similarly long-running countrymen, Unleashed. "Tartarian Winds" is a rarity, (slightly) slowing the pace and vitriolic vocal delivery, so as to clearly enunciate, without any loss of the spit & vinegar. Speaking of subtlety, abruptly ended "The Infernal Depths Of Eternity" is like someone jumping out from a pitch-black corner of the local haunted Halloween attraction. From the serene, a sudden fright, this one complete with guitar attack.

Singing sword? No just the sustain of guitar, kicking off bouncy "The Shadows". Headbanging, fist thrusting, toe-tapping? Yes to all, for otherwise brutal "As The Fire Burns". Massive length (7:09) "The Return Of A Long Lost Soul" begins as a moody growler, gathering intensity and a swirl of dueling guitars, as they progress. There's even an Eastern vibe, for a few bars, before the full speed finale. Class all around. No mistaking that high pitched wail, Destruction mainman Schmier adds his voice to album closer, "Devil's Spawn Attack".