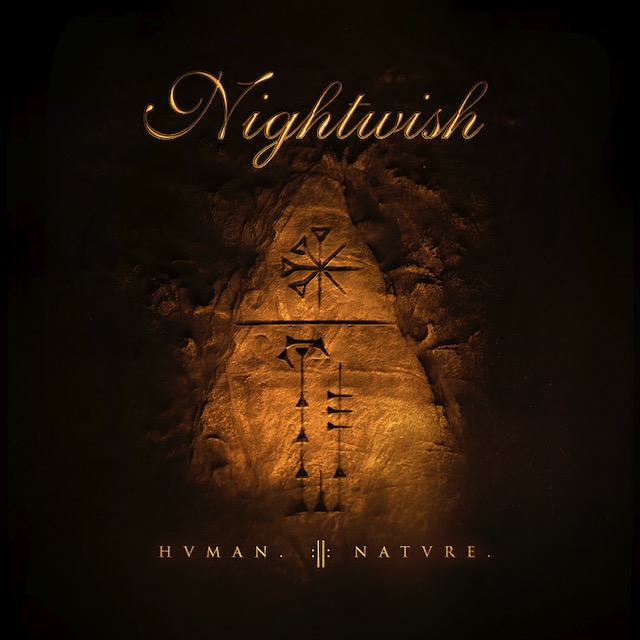 Timing is everything and released in the midst of a global pandemic/lockdown, certainly NOT the joyous Nightwish the world so desperately needs right now. Double disc effort from the Finnish masters, although even the band freely admits that only the most ardent fans (and there are scores, globally) will be interested in the indulgent second disc.

Another dynamic ride opens with "Music". Quiet, to start, like a sedate, operatic Broadway moment (Lion King?), before drums and pipes are gradual added, then (in the final third) dispensing with the piano and kicking over to a more bombastic Nightwish anthem. Conversely, "Noise" sees mastermind Tuomas Holopainen's rhythmic keys dance, from the start, backed by Floor Jansen's normal register. One of the straight ahead rockers, augmented with snippets of cryptic voiceovers. Human II Nature marks the first album to make use of (piper) Troy Donockley's vocals. First heard prominently in "Shoemaker" (Jansen offering some trilling, Tarja Turunen style operatics, as it winds down), he's also the star of "Harvest". The mild take on a folk song comes complete with clap-along section and jangly guitar, prior to Troy picking up his pipes and the band doing the same to the pace. Think a mid-tempo "Last Of The Wilds". Don't worry about longtime male back-up singer Marco Hietala (bassist, Tarot co-founder), he stars as the lone voice on meandering album closer "Endlessness".

A flourish of piping introduce "How's The Heart?", Jansen & Donockley (when not playing) in duet. It's an easy going, staccato 4/4 drum beat, broken (come the chorus) by full band. It ends a cappella. Bouncy "Procession" eventually gets around to trademark, tinkling ivories Nightwish. Could just use a little more oomph, here and throughout the other eight tracks comprising the initial disc. Maybe some energy similar to follow-up "Tribal", the loudest and most aggressive composition of the bunch. Rest assured, this isn't an immediately gratifying platter. It's a grower.

Then there's the accompanying outing. Basically a classical music recording (digitally encoded as "symphonic music"), it's almost completely devoid of human voices (unless the occasional narrative voiceover, indistinguishable choir or repeated utterance"ah -ah" count) and certainly NOT rock, let alone metal. Think soundtrack. Donockley told BraveWords' Carl Begai, "The second disc wasn't designed for anybody else; it was designed to entertain us. If other people get some enrichment from it in whatever way, imaginatively or sonically, that's an added bonus."

All eight selections are subsections of "All The Works Of Nature Which Adorn The World". Opening with a voiceover that announces the entire theme, "Vista" is symphonic strings, synthesizer and moaning vocal. Ending with gulls and a crashing surf, "The Blue" is a belabored, thumping cello laden number, with choir. "The Green" sees a restrained Holopainen play alongside harp, while Donockley (fittingly) adds some nuances to "Moors". "Aurorae" is a rare lively number, certainly an action movie type score (to these ears, recalling the original Magnificent Seven, not Denzel version). Low moan of cello and pizzicato strings atop tympani (sort of Disney's Sorcerer's Apprentice music) comprise the mouthful of a title, "Anthropocene (Including Hurrian Hymn to Nikkal)". Return of the initial female (and only) speaking voice, on "Ad Astra" finale, ends with a triumphant flare, absent the rest of the material. Since it's included for "free' can't quibble about Disc #2, but doesn't figure in the overall score.