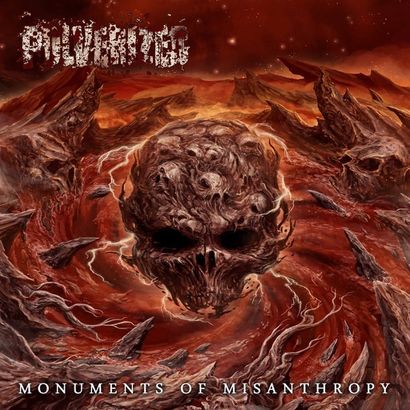 Man, I dig the math here on this Chilean death metal band’s debut album: six songs in 38 minutes. I also dig how almost every song here is longer than the last, Pulverized starting out relatively simple and old-school USDM with the impressive and solid “Devoción”, channelling all the greats of the early ’90s; it leads us into the caverns with “Consumed By Ignorance” (love the vocals-only intro!), a song that flirts with both the slow and fast sides of Incantation’s split personality, with tons of success.

“In The Depths Of Insanity” welcomes us to the album’s mid-point with six minutes of DM that just gets heavier and heavier, slower and slower, more and more atmospheric; it feels like what the album has been building up to. “Cadáveres” is next, and goes hard for 8:34, the band alternating between grinding and spelunking, with some divebombing soloing thrown in for good measure; it’s a long song but never once gets boring (also, now seems like a good time to mention that these guys sing in both Spanish and English, not that you can tell). “Aniquilación Genética” and “Profecía-Flagelo-Extinción” provide the one-two closing punch, and by now you get the idea, and these songs deliver the great final punch an album like this needs to end off on, in turns energizing and totally annihilating.

All told, what a great journey through some serious aspects of death metal’s different sounds, Pulverized delivering it all with skill and authority, the excellent and huge production helping steer the listener through the sludge. Love it.