RICARDO S. AMORIM - Wolves Who Were Men: The History Of MOONSPELL 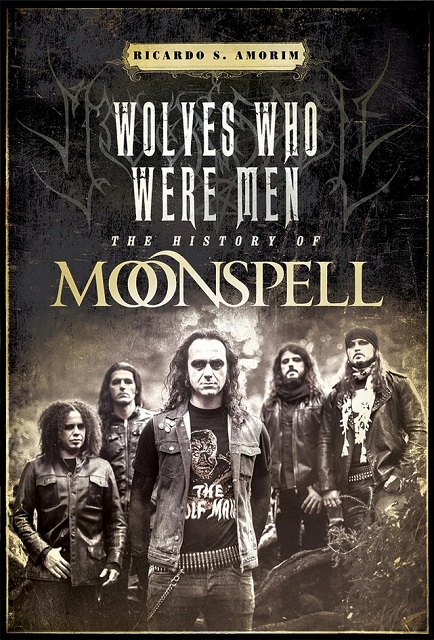 Paradoxically, the author has the same name as the guitarist about whom he chronicles. This is explained in the first chapter, where he states his credentials (longtime journalist/friend of the Portuguese outfit) for constructing this 400+ page tome, crammed with b&w photos, letters, lyric sheets, etc. It's not really until Chapter 3 where Amorim gets down to business. The preceding section is devoted to the state of metal when Moonspell kicked off and a brief history (pointless to any/all metalheads) of the bands that influenced their sound/outlook: Venom, Hellhammer/Celtic Frost, Mercyful Fate & Bathory.

After a couple of low budget tours of Europe (complete with plenty of hardships), the band begins to implode, ultimately ending in founding bassist Ares not only ousted, but launching a vicious 7 year lawsuit/counter action that the members never truly rectified. In fact, more than two decades later, old friends haven't even talked to each other, although all are interviewed for this book! Given the Latin heritage, there's lots of emotion throughout the read. Unlike most bands, formed by rehearsals and interchangeable parts, Moonspell remain a family, bonded by their unlikely (for the metal/music world), yet common origins. While not as lascivious as The Dirt, or as revealing as Some Kind Of Monster, it shows how a band can start to fragment with success: members zone out, chasing rewards, others stepping up, as priorities (and musical/lyrical ideas) change. That leads to more stress, new directions, more stress, new leaders, departures... a seemingly endless cycle (ultimately leading to break-up), if they're not careful.

In addition to triumphs, the band freely discusses missteps, personal failures, even criticizing their songs/albums. There's also conversations with producer Waldemar Sorychta, plus the former heads of Century Media and Napalm Records. After years of experimentation, and albums that failed to connect with all/part of their established fanbase, the band left Century Media, for SPV, on Memorial. Oddly enough, said disc reconnected the band to metal and metalheads, utilizing the aforementioned producer and reprising the same studio they'd used for their initial successes (Wolfheart, Irreligious & Sin/Pecado). Must admit, it's sometimes difficult to keep all the names straight, what with the recurrent appearances of guys called João throughout their history, as well as bassists Ares versus Aires (Pereira), the latter forbade from recording (due to his unreliable/drunken persona) until '12 album Alpha Noir/Omega White, despite touring as a hired "session player" for almost a decade!

It's odd for a band to go "crazy," enjoying the fruits of the road, eight albums into their career, but such was the state of Moonspell, as warranted by renewed interest (due to the music looking backwards). As they got married, had kids, the decadence disappeared, easing the omnipresent tensions within the group. They relate possible (future) concessions to age. With such a varied catalog, each recording seems to alienate one or another band member: ruffled feathers having to be soothed before the next trip to the studio. Odd dynamic, considering their longevity. The book goes up through 2017, the final chapter, written in the same first person, as the rest of the adventure, highlights the author's personal interactions with the band: attending concerts/festivals, as their guest, joining band at home, weddings, parties, etc. Essentially no Moonspell leaf is left unturned.