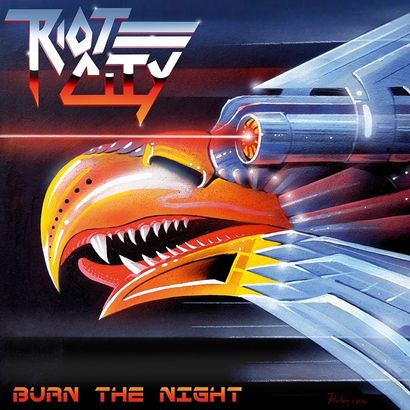 It takes 46 seconds, the Calgary foursome unleashing a tandem of blazing guitars and Cale Savy's piercing highs! Welcome to the 80s... although the stratosphere scraping singer's birth was only in the final year of that hallowed decade. With eight tunes lasting just 37:08, this debut reminds me of the glory days of Metal Blade compilations, when so many quality bands, like Savage Grace, Helstar, Viking and/or Liege Lord (whom “Warrior Of Time” recall) could get lost in the shuffle. Different road to anonymity these days, but with the same no frills, go-for-it naivety. Sure, there are better technically performed/recorded albums out this month, but LOVE the spirit and enthusiasm seeping out of grooves on Burn The Night.

Crank it up and watch 'em go! The title track is whiplash inducing, just listening to it, let alone trying to keep time headbanging. After the restrained intro, “In The Dark” might even have too much high pitched singing for me, but a momentary qualm overtaken by the fleet fingered wizardry. Judas Priest inspired “Living Fast” is an accurate moniker, completed in 2:55. Around the halfway point, the quartet unleash a 5:55 “The Hunter”, the first hint of subtlety on a searing/screaming platter, but rather than play it straight, the final two minutes revert to what Riot City do best, tear it up. Totally OTT (over the top), “Steel Rider” is a speedy onslaught of notes and shrieks. “329” lasts that long, while closing “Halloween At Midnight” employs an endearingly cheap female scream, to start (seemingly lifted from a horror flick), just like the “old days”.

25 years from now, they'll be headlining boutique metal festivals like Up The Hammers or Keep It True, but already destined to be amongst my Tops of 2019 list!