SKULL FIST - Way Of The Road 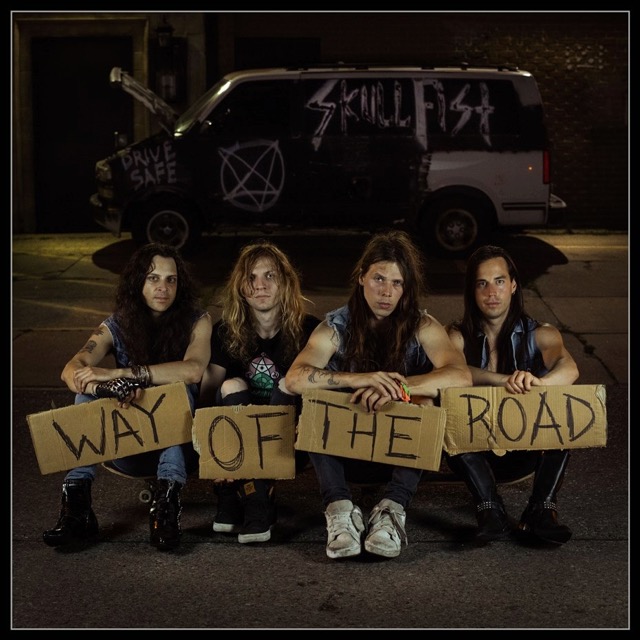 Third full-length in eight years, from the constantly touring Canucks. Drum and guitar paean to Van Halen kicks off "You Belong To Me" opener. Like VH, Skull Fist are about having fun with fast, loud music. Listen to all the guitar runs, in just the first song! The loose, go for broke attitude is dialed back a bit, for the more retrained (actually quite tuneful) "No More Running", but still punctuated by Zach Slaughter's high (acquired taste) vocal register.

"I Am A Slave" returns to speed and drum bashing, accented by Slaughter's six-string, ahem, eruptions. Old school ‘80s indie metal feel to "Witch Hunt" pounder, while the mid-paced, autobiographical title track is another stab at accessibility, apart from closing guitar flourish. "Heart Of Rio" is a throwaway, but showy "Better Late Than Never" really lets the notes fly. Just when you thought it was fast, Slaughter opts for a bunch of hammer ons. If you somehow missed the earlier Van Halen influences (and I don't consider myself a big fan), "Don't Cross Me" makes it (hit you over the head) obvious. Most of the tracks fail to crack four minutes, but the big anthem, "Stay True", last in the nine track running order, clocks in at 5:20. Might be what White Lion would have sounded like, had you ever got the acoustic guitars away from Vito Bratta! Can't wait to see how some of these translate to the stage. Raise your Fist!