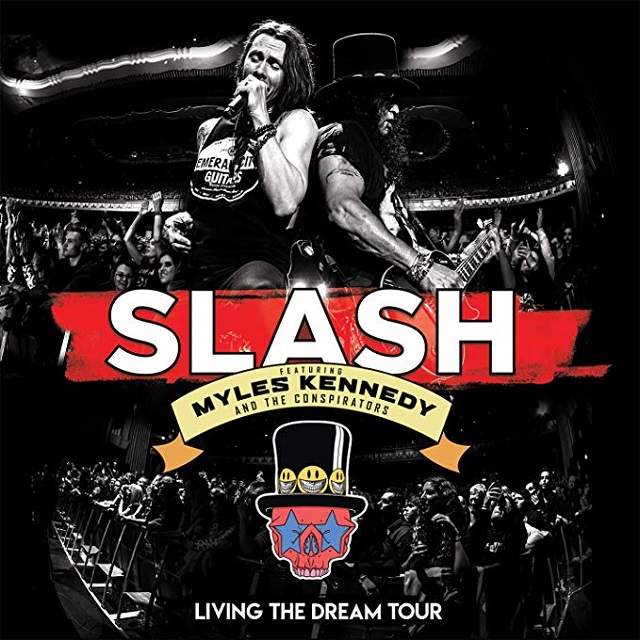 Filmed at the legendary Hammersmith Apollo in London, England on February 20, 2019, this Blu-ray / 2-CD set clearly showcases Slash Featuring Myles Kennedy And The Conspirators having a great time on stage! No video screens, no pyro; this is all about rock ‘n’ roll. Underneath his trademark top hat and sunglasses, the Guns N’ Roses lead guitarist is sporting a vintage Blizzard Of Ozz t-shirt – which eventually ends up being drenched in sweat!

A perfectly paced 22-song set list, spanning 2 hours and 17 minutes, focuses on all four of Slash’s solo albums, with only one GN’R song aired, that being “Nightrain”.  Although personal favorite “The Dissident” didn’t make the cut, it’s impossible to argue with the passion put forth on “Shadow Life”, “Lost Inside The Girl”, and “By The Sword”. Bassist Todd Kerns takes the lead vocal slot for “We’re All Gonna Die” and “Doctor Alibi” (originally sung by Iggy Pop and Lemmy Kilmister), thereby surging adrenaline levels into the red! Honestly, these guys make it look so effortless, all the while exhorting such positive energy.

Part way through “Wicked Stone”, vocalist Myles Kennedy straps on a guitar, enabling Slash to venture out on a lengthy, extended solo. During “Mind Your Manners”, Slash rips up the stage with a fantastic two-step; he’s so into the music! “Starlight” is absolutely lovely; the concert keeps getting better as it goes on. Once “World On Fire” hits the mid-section, Slash puts his pic in his teeth and treats us to some mighty fine finger-picking. “Anastasia” is a brilliant closer; and then there’s the bonus material. Stick around for backstage and soundcheck footage, as well as interviews with Myles and Slash. Living The Dream Tour really is a dream come true!