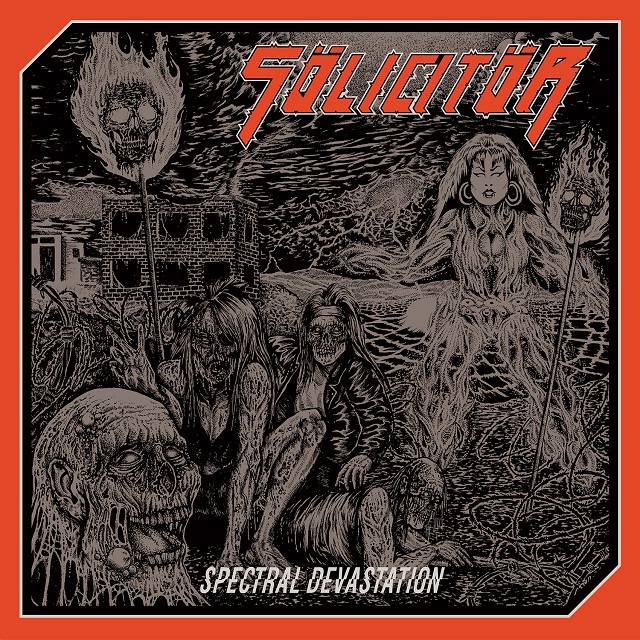 Man, this really takes me back! Precisely the kind of fresh, exciting, albeit raw, speed metal that we were listening to (and airing on college radio) back in the mid-‘80s. However, Sölicitör (umlauts over BOTH Os!) are a relatively new band, from Seattle, and this is their eight song, full-length debut. Amy Lee Carlson (outlined in caricature on the album artwork) is a fiery singer and at times, the rapid delivery is devoid of gender.

"Blood Revelations" comes riffing and screaming (literally) out of the speakers, announcing their intentions. On the rare occasion when things temporarily downshift, into third gear, just as quickly a nasty slice of buzzsaw guitar typically breaks the pedestrian pace. Sound good? That bee hive buzzing is never far away. Some will say it's OTT (over the top), but not me. Manage to get a little traditional metal twin lead harmonies (for a brief moment) during otherwise crash, bang, wallop of "Betrayer". Ride cymbal accents throughout the 6:37 "The Red Queen" and "Leather Streets" races by. Most of the compositions are over in less than five minutes.

For a bit of diversity, audible fingers sliding across acoustic strings greets "Night Vision", which quickly dispenses with the subtleties and locks into high tempo NWOBHM rhythm, a tale of living the metal life. The rat-a-tat of snare kicks off "Terminal Force", a bouncy number. A howl opens the blazing staccato riffs of "Spectres Of War", which also features a warning siren, in its midst. Gradually growing louder, a snippet of backwards recording introduces the disc closing "Grip Of The Fist". The intensity and repetitive "iron grip" chorus makes one think of Motörhead.

Step into the (glorious) past!