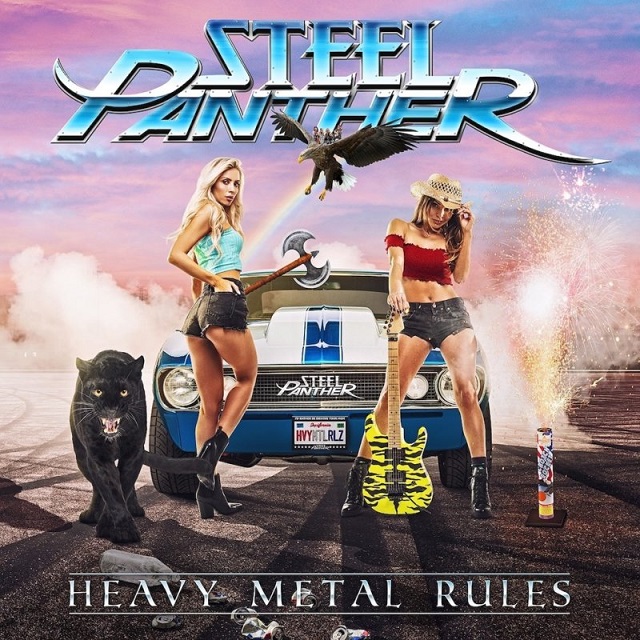 Everybody’s favorite vulgar rockers are back with their fifth album (amazing how time flies) of hymns dedicated to sex, drugs, and the gloriousness of heavy metal. While I was less than enthused with 2017’s Lower The Bar, Heavy Metal Rules is a more inspired effort and holds the perfect to odes to get drunk and high to.

As usual the production values are top notch with each every instrument crystal clear and proving ample punch, especially the guitar work of Satchel. Check out those tasty licks in “Sneaky Little Bitch”, the admirable “Let’s Get High Tonight”, and balls out traditional metal flavored “I’m Not Your Bitch”. Steel Panther gets derided as a joke by some with their act and lyrics, but one of their best qualities is how singer Michael Starr can paint a picture of what’s going on in these songs despite all the curse words being tossed out. In the heartbreaking ballad “Always Gonna Be A Ho”, Starr is pissed that his girlfriend has cheated on him more than he has on her and the verse, “I never knew I could feel quite so sick, I kissed your mouth and tasted Satchel’s dick, I ran away, went to my grandpa’s farm, I saw your name, tattooed on my grandpa’s arm” seems simple and understandably silly, but it creates a scene the listener can see in their head and it helps if you’re familiar with the personalities of the band.

While this coked out adventure seems typical, the title track is a jaw-dropping moment as it is safe to say this is the band’s venture towards in doom metal. Starr powers through a piano begun ode to the genre we all hold near and dear to our hearts and a full, awesome, Sabbath-like riff erupts as he belts out the line “Gene Simmons said it, rock ‘n’ roll is dead”. Highlight of the album right there! Starr’s natural charisma shines on the Shakespearean platitudes of “Fuck Everybody”, especially with the eloquent chorus of “fuck everybody, everybody can suck my dick.” Crass and to the point, another example of why people love this band. Of course everything isn’t perfect, as “Gods Of Pussy” doesn’t hold much worth aside from the funny lyrics and while acoustic led closer “I Ain’t Buying What You’re Selling” meanders too much, the harmonies of the chorus are very impressive.

With Steel Panther, they will sink or swim based on the strength of their riffs and hooks and the last album was lacking in those departments, but they must have upped the drug dosage and mixture as Heavy Metal Rules is a banger and if you’re one of those that has never like the Panther, there is always time to hop aboard the party train.