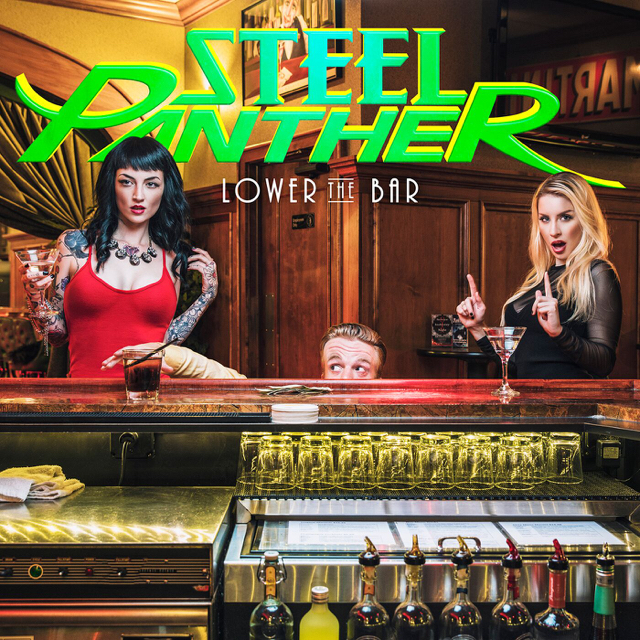 It seems the album title was a sign of the notes to come. I had high expectations for this, but man…what a disappointment. In Panther speak, the first three albums were the high class hookers you’d know that were a good time, but Lower The Bar is the cheap prostitute on the corner who pretends she’s into it, but you know she really isn’t.

Lower The Bar is the Panther’s most lyrically tamed (which isn’t a big deal), but unfortunately the music is too. The badass, sleazy filled riffs and rockers are replaced by generic tunes and hooks that fail to keep the ride on the tracks. It certainly doesn’t start that way though; this records blows its load on the first few cuts. The first four of five rockers have all the hallmarks of what makes Steel Panther great: an energizing opener with tasty licks courtesy of Satchel (“Goin’ In The Backdoor”), a fun, sleazy-peazy rocker with an easily digestible chorus (that sounds exactly like “Cherry Pie”) (“Poontang Boomerang”), a humorous, catchy, head-bobbing ballad (“That’s When You Came In”), and the best of the whole record, “Wrong Side Of The Tracks (Out In Beverly Hills)”. I’m baffled how that one wasn’t a single because it’s funny, badass, and one of Satchel’s best riffs that he’s ever produced. The only exception is the straight-to-the-point “Anything Goes”. It’s a solid track for a B-grade glam band, but this is Steel Panther we’re talking about here.

The cat’s claws are not as sharp on the latter tracks. “Wasted Too Much Time” is the worst Steel Panther ballad and comes off as whiny and annoying rather than funny. “Pussy Ain’t Free” has a cool cat-walk bassline from Lexxi Foxx, but the vocal lines and chorus are uninspired and that’s the mainly the problem with the back half of the album; it’s too plain. The unexpected “Now The Fun Starts” is more atmospheric and airy (yes, very different from a typical Panther tune), I like them trying to be a little different, but it just doesn’t work here. The only savior from the second back half is the synth-backed “I Got What You Want”. It’s a bit simple, but the lyrics leave an impression and one of the best choruses is featured on here. The bar hits the ground with the Cheap Trick cover “She’s Tight”. All Steel Panther closers leave a mark on the listener like “Girl From Oklahoma” and “She’s On The Rag”, but not this one. Ending on a simple cover is half-assed and half-baked and maybe that’s the problem; there wasn’t enough drug intake by the guys during the writing sessions to fuel inspiration.