THE LIGHTBRINGER OF SWEDEN - Rise Of The Beast 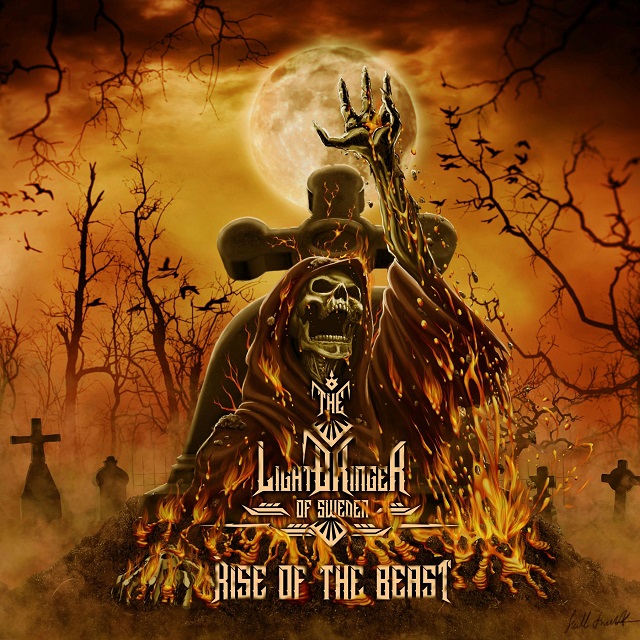 Sporting the considerable vocals of Herbie Langhans (Avantasia/ Voodoo Circle/ Firewind/ ex-Sinbreed), comes the ten track debut (nine songs plus introductory voice-over, "The Moon") from a Swedish outfit, steeped in the traditional metal glory of mentors like old school Helloween and/or mid-‘80s Accept. Apparently, guitarist Lars Eng (who started and wrote this as a project) had targeted Wolf frontman Niklas Stålvind as the singer, but other commitments made Eng opt for the talented German, instead. Basically, a concept album, conveying a tale of the Devil (aka Lightbringer) and his henchman Skeletor.

Like a run-away locomotive, initial proper tune "Fallen Angels" rockets down the rails: clickety clack, the metallic Teutonic metronome. Not sure why all that good will and energy is squandered with pedestrian "The Beast Inside Me" power ballad follow-up. Let the good times roll, at least one more song! Odd, since there are only three subdued cuts in the entire bunch (the other being "Heaven Has Fallen"), so why position a pair back-to-back? And so early? Guess the storyboard demanded it. Similar to the opening barrage, the lively spirit returns, two songs later, with pummeling headbanger "Into The Night". Continuing with fist pumping "Skeletor", the loose bass strings rattling like tank treads. "Lightbringer" quickly slides into that chugging, German, guitar-driven pocket. Ditto "Save Us", before the disc concluding "Shadows of The Night" leaves a smile on the departing listener's face.

Not sure if this incarnation is a one-off (especially given Langhans' schedule), but enjoyable, for what it is.