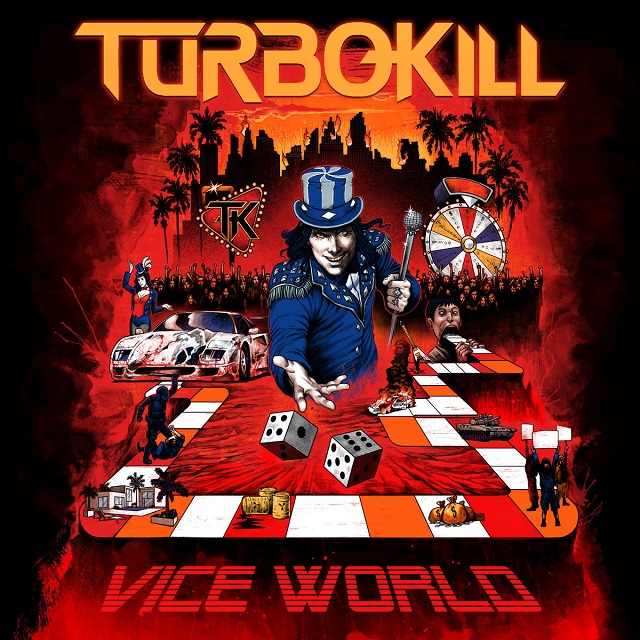 A dozen tracks (including 62 seconds "The Grand Delusion" intro) on the debut from former Alpha Tiger singer Stefan Dietrich. While his old bandmates have gone in a different direction, Turbokill retain the high energy, traditional metal blueprint.

Witness the speedy "War Thunder". Dietrich's clean vocals are smooth, tending towards the higher register, but not into dog whistle territory. Plenty of blazing guitars too, but more as accents than start-to-finish thrash/speed metal intensity. The title cut is infectious, as if a deleted outtake off the Tiger's Beneath The Surface masterpiece. Listen to Dietrich's sustained high notes and twiddling neo-classical flourishes. There's a youthful exuberance coursing through the album, including the strangely entitled "Global Monkey Show". Featuring gang backing vocals, come the chorus, and has a hair band (Skid Row?) party vibe about it. "Sail With Pirates" is another winner. Their signature tune has a gritty, ‘80s American metal feel, something akin to Malice, Liege Lord or several Metal Blade contemporaries. Begun with a news report voiceover, "Kill The Lie" is a cynical call for a dose of reality: "There is no way we all can live in peace, one day." Reprising the chugging Judas Priest guitars (legit, or Malice style simulation), there's "End Of Days", before "Fortress Of The Universe" closes things out, a fine example of robust, clickety-clack Teutonic metal. Turbokill are another name to add to the must-see list.