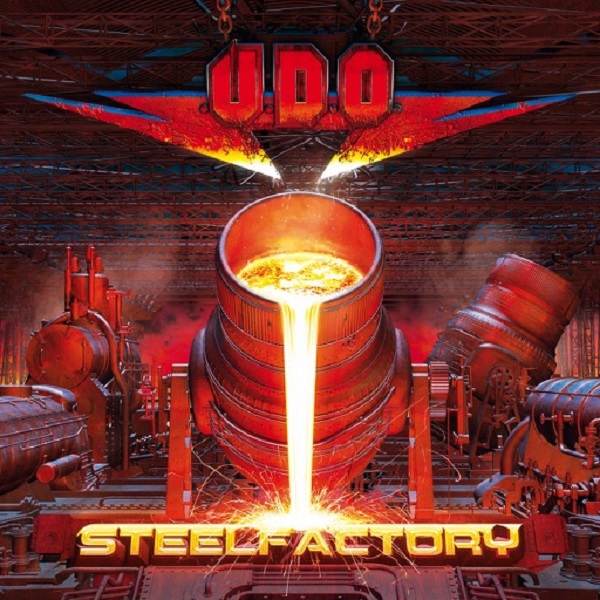 Udo goes disco? No, but if you're reading this review, probably already know how Mr. Dirkschneider's music sounds. Like the string of albums since Steamhammer, strong material, but would be even stronger with judicious pruning of the baker's dozen (If you can't get enough, there's a pair of additional bonus tracks on the limited edition). With Bill Hudon splitting after the all-Accept run of Dirkschneider dates, Steelfactory was recorded as a one guitar band, although they're looking for a second, live player.

Following a short regal intro, "Tongue Reaper" jumps right into high energy, guitar driven Teutonic metal, with leather lunged vocals. Or U.D.O. at their best! From there, it's the "Living For Tonite" mid-tempo stomp of "Make The Move", the singer basically talking his way through the repetitive lyrics. Speaking of minimal lyrics, plodding "Keeper Of My Soul" is almost exclusively the titular phrase, for its 4:02 duration. Always enjoyed Udo singing slower, more emotive tunes, like his "Cry Soldier Cry" or Accept's "Winterdreams" and "Seawinds". Granted, it's not my preference, but offers a great counterpoint to the gruff heaviness. Witness current "In The Heat Of The Night", complete with acoustic guitar outro. Chance for guitarist Andrey Smirnov to show off, a bit, on "Raise The Game", while follow-up "Blood On Fire" is built around classical music, without being symphonic. Simplistic "Rising High" pumps up the tempo again. "Hungry And Angry", again, almost the sum total of the words, will be an easy sing-along, live. "One Heart One Soul" sees Udo's voice double tracked, normal voice atop more high pitched register. Come the chorus, there's a veritable chorus. "I'm sick of all the lying and bleeding hearts surrounding me." Full speed ahead, "Eraser" is the pick of the litter. "Rose In The Desert" is another solid mid-tempo thumper. "The Way" finale, like the ending to many U.D.O. platters, is something different. An acoustic guitar ballad, the band doesn't join in until halftime. Basically, it's an autobiographical pat on the back, "so proud I did it my way. The road is where I belong".