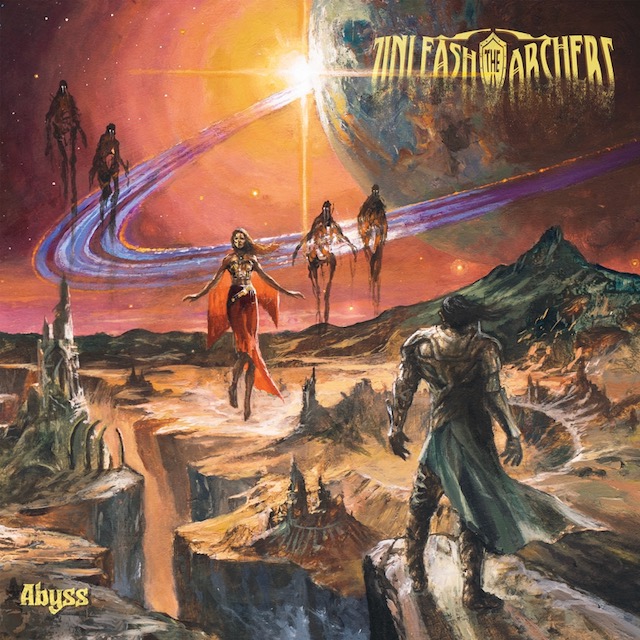 Unleash The Archers turned heads with the enormous 2017 album Apex, a full-on concept album that is continued with Abyss. The Canadians, who have neatly towed the line between power and melodic death metal have basically abandoned the latter while introducing new elements to their sound. While the title of Abyss ironically indicates being at the bottom, the impact of the music should ascend them to the mountain top and establish them as bona fide heavy metal superstars.

In what seems to be a growing trend in the music world as well as the metal realm, the synth has made its way in to the Unleash The Archers repertoire and due to the galactic, spacey vibe as illustrated on the artwork; it makes perfect sense within the context of the album. “Through Stars” is basically a synth-wave track with a metal backdrop and also stands out as one of the catchiest Abyss has to offer. Brittney Slayes’ impressive vocal abilities are on display as there is a distinct ‘80s feel to the song. Speaking of ‘80s, Unleash The Archers try their hand on a full-blown power ballad with “Carry The Flame”. Featuring a big chorus and a grand solo, was totally not expecting a song that could fit on a Scorpions record, but the chances the band are taking are paying off as they are proving they can write these types of tracks really well.

Due to the progression and structure of the story, the amount of death metal vocals is kept to a minimum and appear in the middle of the record on “Return To Me” and “Soulbound”. The former is musically the most the most aggressive in the verse parts with pummeling and flourishes to an adventurous chorus and a timely melodic solo and the latter holds the trademarks of UTA with energetic rhythm, but is outlined by bouncy synth keys. Speed is the name of the game in the Stratovarius-like and appropriately titled “Faster Than Light”, while the stunning and enchanting opener “Waking Dream” sets the tone after Apex ended on a somber note, story-wise.

The focus and sturdy development of the songs cannot be understated. The unusual structure of “Legacy” doesn’t follow the verse-chorus pattern and is runaway train of continued vocals splashed with bright solos and could become a potential live hit.

Abyss is an album first and foremost and is designed for front-to-back listening to follow along with the fleshed out story and it’s easy to follow along and feel the emotions of the characters on their journey. A truly impressive display of musicianship, songwriting, and risk taking takes UTA to the next level and will undoubtedly be one of the albums of 2020.