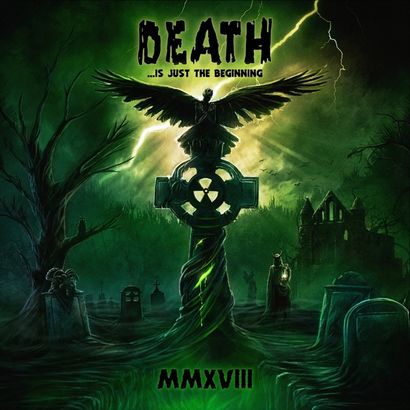 They ain't exactly the Contaminated series of compilations, but Death... Is Just The Beginning were always fun comps to listen to, Nuclear Blast giving a good overview of the best of their best on these.

Here, Benediction kick things off with a demo of “Tear Off These Fucking Wings”, which leads straight into Kataklysm doing a re-recorded version of “The Awakener” off of their absolutely classic Temple Of Knowledge album. Can't touch the original, but it's a fun listen nonetheless, and it leads into Hypocrisy's over-the-top cover of The Exploited's “They Lie”, making for a fun and energetic opening trio of tunes. Approved.

Elsewhere, well, it wouldn't be Nuclear Blast without some forgettable melodic death/black, so there's The Spirit and Bleeding Gods taking care of that, and Thy Art Is Murder never do anything more than sort of vaguely frustrate me (and good god what is with that drum sound?). I dig Memoriam quite a bit, so their demo version of “The War Rages On” was welcomed by my earholes, while Insidious Disease deliver competent death. Death metal forefathers Possessed show up with their demo of “Abandoned”, originally released as a Decibel magazine flexi, and, yup, still rules. Immolation laying down a cover of Sepultura's “Morbid Visions” with Max Cavalera guesting can only be 100 percent awesome, Nailed To Obscurity deliver confident and rewarding death/doom, and I wish Decapitated didn't just sound like Meshuggah these days, so their cover of “Sane” here just makes me pull more of my hair out (and it sounds basically identical to the original, argh Decapitated). Aenimus sort of sound like Meshuggah covering Decapitated and it's not a lot of fun, but a closing trio of semi-rarity songs from Paradise Lost, Carcass, and Brujeria is clearly going to rule, even if you've heard the tunes before.

All told, man, a fun and varied compilation, well worth a spin or two.