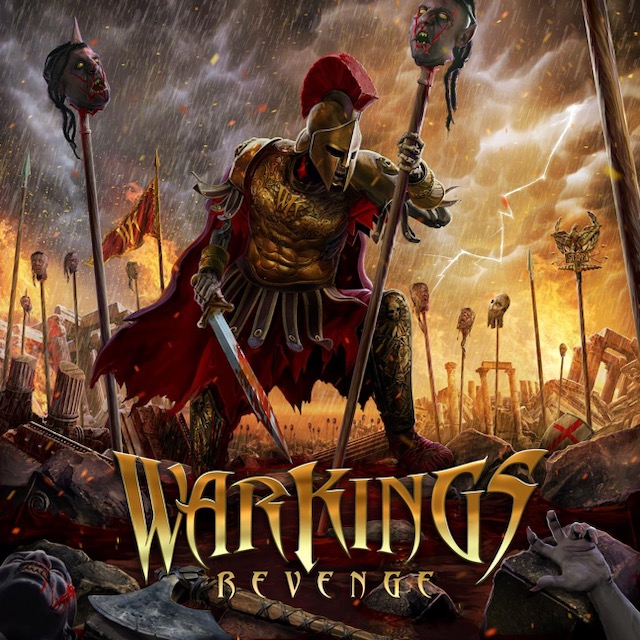 Had largely ignored the masked, gimmickry characters of this multi-national force, prior to the warm-up show at last year's Bang Your Head fest. Their vibrant take on the galloping, clickety-clack of Teutonic melodies (and unique staging) persuaded me to head backstage and meet the band, minus their trademark disguises (which I was informed, was a first!). Serenity singer Georg Nauhauser is known to be The Tribune, a caped, fur stole wearing Skeletor (He Man Of The Universe, anyone?) figure, onstage, with an off-kilter Peavy Wagner (Rage) timbre. Now, come ten creations since our gathering.

Where Sabaton (tend) to retell historically accurate military events, Warkings opt for ancient reference points, that sometimes blur facts with myths. "Freedom" is the oft told tale of Scottish independence, going so far as to recite the narration Mel Gibson offered in Braveheart. Video track "Warriors" is upbeat and features lots of tapping on the fretboard. As a change of pace, a guttural female vocalist (think Sabina Clasen meet Alissa White-Gluz) is in duet on the otherwise poppy pomp of "Odin's Sons". Despite a heavier intro, "Fight In The Shade” (with its "raise your hammer, fight!" chorus) is more meandering, think Karevik-era Kamelot. Ditto "Banners High". The pumping Judas Priest intensity to "Battle Of marathon" is the standout number. The rhythmic stomp of marching centurions (and the clank of their armor) morphs into industrialized intro of the band's closing signature tune, complete with commander's shouted voiceover.

All power metal fans should investigate, especially (if like me) you (mis)judged this "book" solely by its cover.