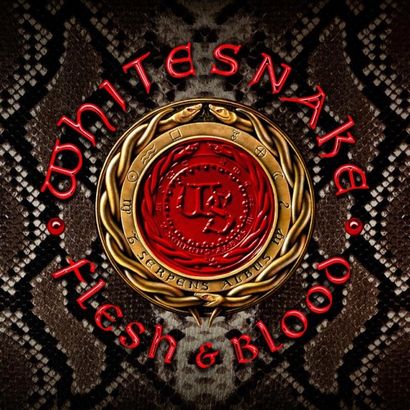 Got into Whitesnake before the teased hair and fancy outfits, when they were denim wearing, hard rock from the UK and have always preferred that edition of a band now celebrating 40 years of existence. Slide guitar opener “Good To See You Again” seems destined to kick off the upcoming concerts, with its lively beat and “Good evening kings & queens” lyric. The sustained, slide riffing is the dominate feature, and as such, comes closer to the pre-MTV version of Mr. Coverdale's band. By contrast, “Gonna Be Alright”, up second in this baker's dozen running order, is mid-paced and highly polished/produced: more akin to the 80s heyday. Seemingly alternating between intensities, first single “Shut Up & Kiss Me”, begins with wild guitar run and remains up-tempo, while being tongue in cheek. At least it's more guitar than synthesizers. It possesses an almost showy, Steve Vai (Surfing With The Alien) vibe, although David's repeated “whoa whoa” hoots, near the end, seem unnecessary. Bluesy, mid-tempo rocker “Hey You (You Make Me Rock)” walks the fine line between the two incarnations of Whitesnake, with a bit more honky-tonk slide six-string. “Always & Forever” has a feeling of familiarity, like all the Snake trademarks rolled into one, and while there's guitar, it's subservient to the keyboard. Not David's most daring lyrics either, the titular phrase comprising nearly 75% of the total words.

The songs range in length from quick hitting 3:37 to 6:43 power ballad “Heart Of Stine”. Speaking of softer sounds, apart from the prominent drum beats (courtesy of ageless Tommy Aldridge), “When I Think Of You (Color Me Blue)” could be a leftover from the Slip Of The Tongue era. Countrified “Trouble Is Your Middle Name” ends in a flurry of guitar and police sirens, implying the femme fatale in question is more than an amorous problem. After a lone guitar introduces the title cut, it quickly falls into mid-paced Snake, offering recurrent “Flesh & blood, skin & bones, makes a grown man weep and a young man moan” chorus. Spiced up by flashy guitar break. “Well I Never” begins like a high school sports chant and gang vocal backed “Get Up” has a Van Halen flare, what with its syncopated drum shuffle, widdling boogie guitar runs and “Hot For Teacher” decent into almost acoustics. Speaking of unplugged guitars, that's the only thing that comprises the initial half of “After All”, just David (nearly a cappella), joined by choir of backing voices (come the chorus). The full band never kicks in, synth and a bit of guitar, before returning to lone acoustic. Has a really 70s quality, like something The Beatles or Queen might have recorded. Speaking of vintage UK act, the grandiose “Sands Of Time” closer has a hint of Led Zeppelin. Like most discs with 13 tracks, a few less would have made an even stronger impact. That said, for a man creeping up on 70, Flesh & Blood is a strong album, able to rock, without becoming a maudlin caricature of past lives.