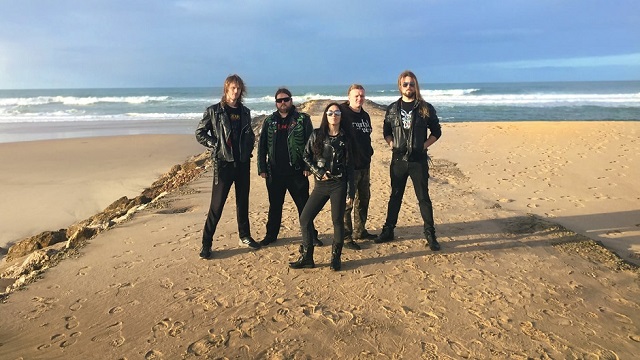 Full disclosure: the first song to be unleashed from Crystal Viper's new album, The Cult, on the Love Thy Neighbour 3000 sound system in this office was the bonus track cover of the King Diamond 1988 classic "Welcome Home". That isn't to say the rest of the album wasn't of interest, but one does not simply step up to the microphone and cover a King Diamond song without the risk coming off as a demented clown. To her credit, vocalist / guitarist / founder Marta Gabriel owns the song, paying brilliant homage to one of the many gems in the King's crown. And while there is plenty to talk about regarding the Polish band's new record - their eighth to date - we would be remiss in not acknowledging and discussing the equal amounts of balls and talent it took to bring the Crystal Viper version of "Welcome Home" to life.

"Performing the song was something of an adventure for me because I wanted to record it for years, but it was never the right time," says Marta. "When we pick cover songs to put on an album, we choose a song that matches the original material on that particular album. For example, our Tales Of Fire And Ice album (2019) was very power metal oriented, so 'Welcome Home' wouldn't have been a good match. So, we recorded the cover of Dokken's 'Dream Warriors' instead. The right time came with this album to record 'Welcome Home', and I was so happy to be able to do it because King Diamond and Mercyful Fate are favourites of mine. And this is my favourite song from him, for sure (laughs)."

"I really wanted to record the song, but at the beginning I didn't know if I would be able to do it. It was actually the very last song I recorded for the new album because I thought that maybe I'd have to spend more time on it than the other songs. The truth is I had a great time recording 'Welcome Home'. I knew that I wanted to sing it in a theatrical way, just like King Diamond, and tell the story not only with the lyrics and the melodies, but like an actress. It was cool because by the end of it I had learned some new vocal techniques. There were also some funny moments because when you're learning new vocal techniques, sometimes you have to create some weird and funny sounds, and there were moments I had to stop recording and sit on the couch until I stopped laughing. Seriously, some of the sounds that were coming out of my mouth were just too funny (laughs). But after I practiced the song I was really happy with the final result. The interesting thing is that I'm wondering how our album would sound now if we had recorded 'Welcome Home' first, because after recording the song I could do new things with my voice." 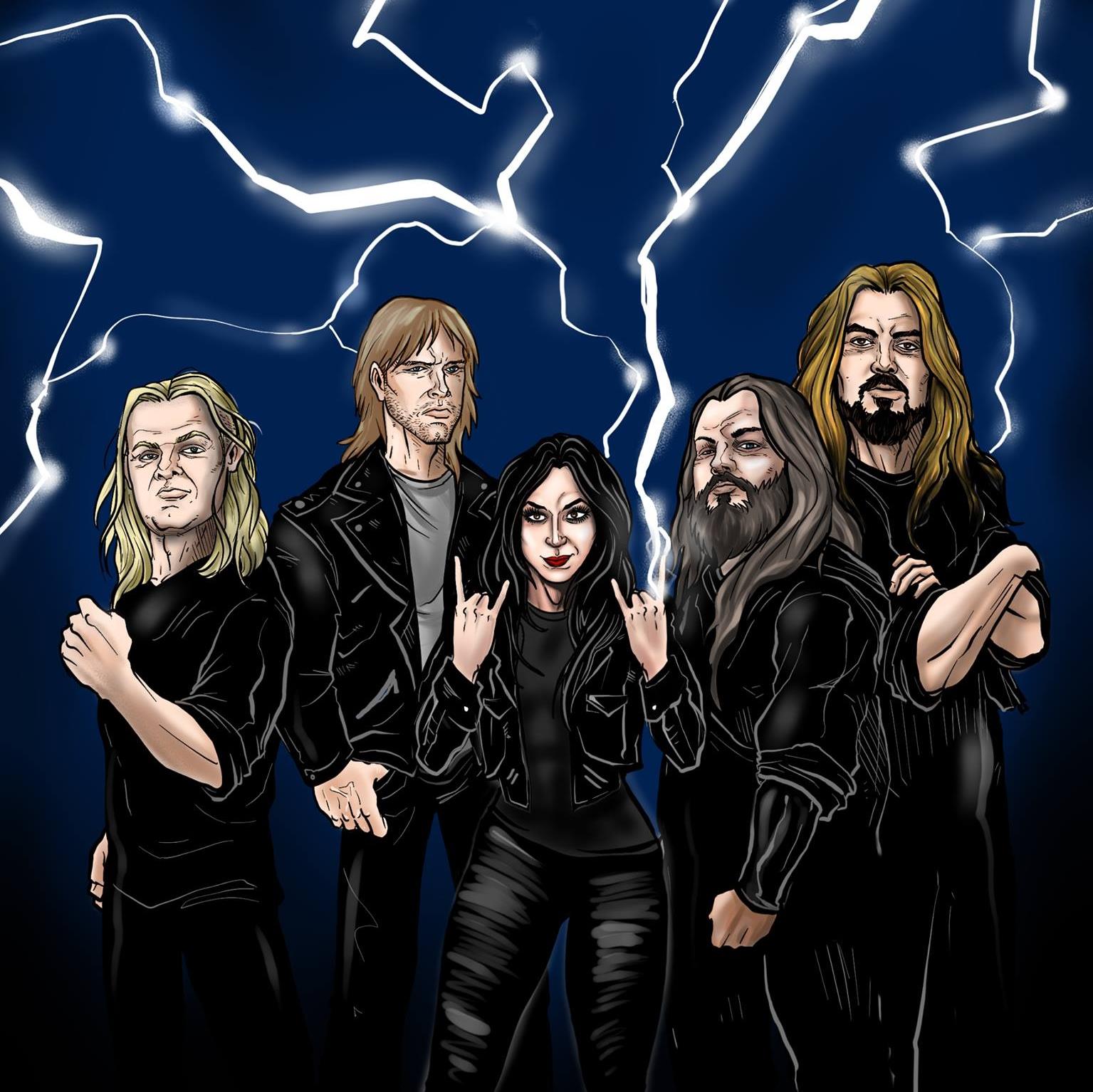 Since the beginning of their recording career, Crystal Viper have included cover songs on their albums almost from the outset, to the point that the fans would likely be disappointed if one didn't surface on a new release. The Cult boasts two, the other being 'Trial By Fire' from UK legends Satan, adding to a catalogue that boasts new renditions of classics from Warlock ('Mr. Gold'), Accept ('TV War'), Riot (Thundersteel') and Running Wild ('Libertalia').

"Cover songs are definitely a Crystal Viper tradition, and there are a few reason for that," Marta explains. "First of all, we are fans as well as musicians, and I believe that every person has his or her favourite song that you sing while cooking dinner, while you're in the shower... (laughs). When you're in a band you can play those songs, you can record them, you can perform them on stage. It's twice as much fun for us to record those covers because we enjoy playing them live, and the fans that show up are there as much for those covers as they are for our original material (laughs). We always record songs by bands or artists that have influenced us and that have a special meaning for us. It's a way for us to show our audience, especially the younger fans, where Crystal Viper comes from, our roots, our DNA."

Like many bands committed to recording during the pandemic, The Cult was assembled remotely, which was a first for Crystal Viper.

"All our previous albums were recorded in a studio, we were all together, but I have to admit it wasn't that bad working remotely for this album," Marta says. "I'm a vocalist, and in order to record I need to be comfortable - I won't lie to you (laughs) - and when you're in the studio you have to keep to a schedule because the time has been booked. So, it doesn't matter if you've had a good sleep, if you feel well, if you're strong enough to sing because the important thing is to have everything finished on time. For this album I recorded at home, and if I didn't sleep well it was beautiful because I could say, 'Nope, I'm going to record that tomorrow...' (laughs). I really did like that, but I also missed the climate of being in the studio because when you work at home there are many things that can distract you. You might be recording, but in the back of your mind there is always something else to do. When you're in the studio the outside world doesn't exist for you at all and focus on the music. There are pros and cons to recording remotely, but we didn't have a choice and things actually went pretty smoothly. We're very happy with the final result and I think it's safe to say we will record in this way again in the future to some degree."

That said, Marta admits she had some serious concerns about pulling off the recordings on a level matching the band's previous albums.

"I actually did worry about it because I had never recorded guitars professionally at home. I had no idea how to do it. I have professional microphones at home, I have all kinds of gear that I need to record my vocals and I know how to do that, but when it comes to recording guitars I had never done that alone. When we do it in the studio I go in and everything is set up and I don't have to worry about anything except playing (laughs). It wasn't easy doing it at home, I have to say."

Always passionate about her work, Marta reveals all the lyrics on The Cult were inspired by legendary American horror writer H.P. Lovecraft. For those that may be unaware of the author's legacy, an ongoing theme in his work "focuses on the complete irrelevance of mankind in the face of the cosmic horrors that apparently exist in the universe." He has inspired countless artists, with Metallica being only one example (see "The Call Of Ktulu", "The Thing That Should Not Be").

"This isn't what I would call a classic concept album, but every song tells a different story and all the lyrics are linked," says Marta. "I dare to say that I think Lovecraft fans would like this album because of the lyrics and the cover artwork. Anyone that knows Lovecraft's work will take a look at the album cover and know who inspired it."

Marta's reason for using Lovecraft's writing as a foundation for The Cult is simple: she's a massive fan of his work, albeit late to the party as she tells it.

"I love to read and I try to read every time I have a free moment because it's one of my hobbies. A couple years ago my husband was reading Lovecraft and he would tell me from time to time, 'Marta, you should read Lovecraft because I see what you're reading and I think you would love it.' I always had some kind of excuse not to - I didn't have time, I had started a new trilogy, always something (laughs) - but in January 2020, I asked my husband to recommend a Lovecraft story to me. He suggested 'The Dreams In The Witch House' and it completely blew my mind. I couldn't believe I found Lovecraft's stories so late in my life. After I read the story I was addicted. I literally couldn't stop myself from reading Lovecraft's books. From there I started to write lyrics inspired by his stories. I would have dreams about the stories and wake up in the morning feeling inspired to write lyrics, and while I was doing that I was hearing the music in my head. I'm sure I will write more songs inspired by his work in the future." 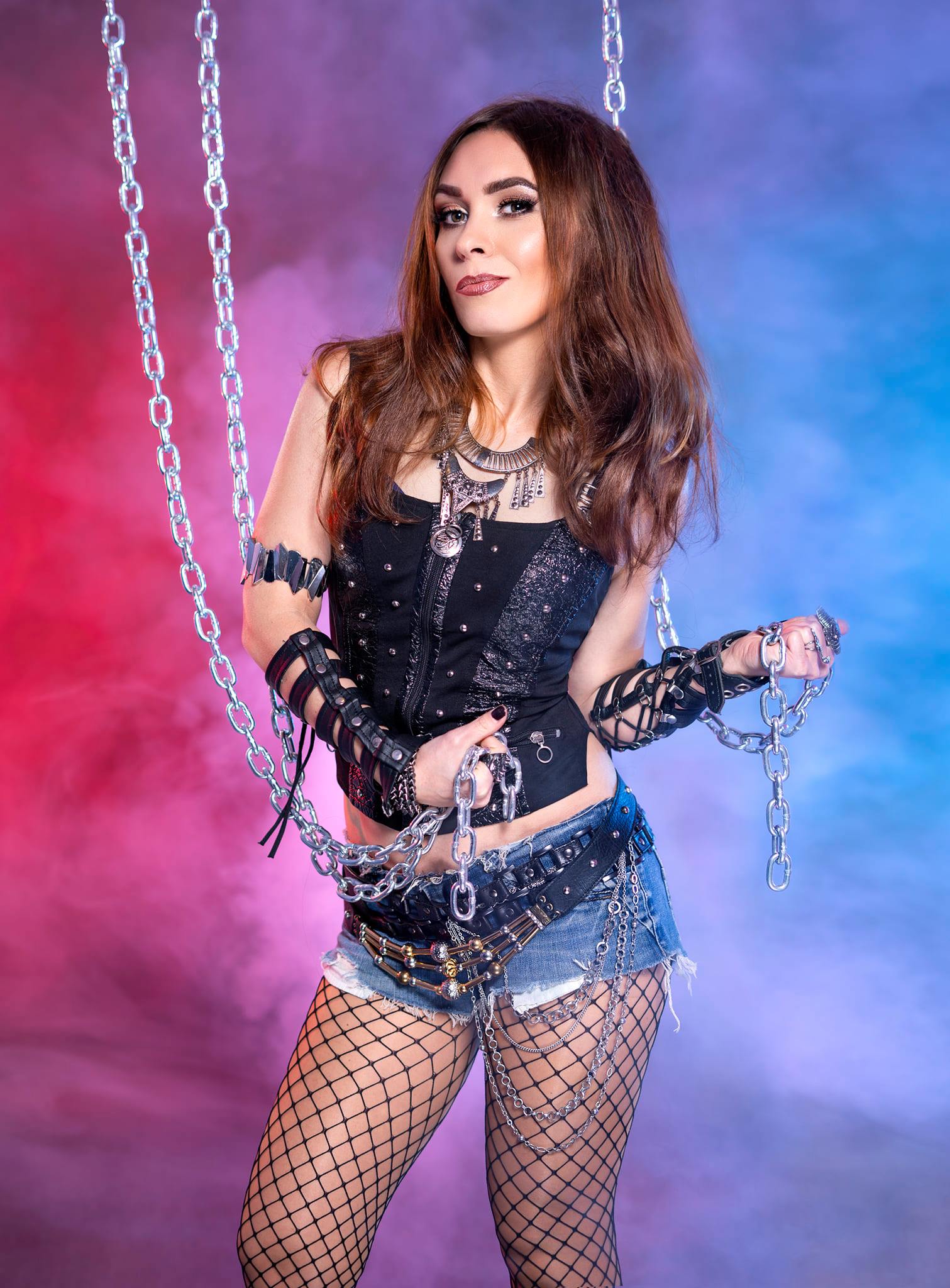 Although Crystal Viper released their debut album, The Curse Of Crystal Viper, in 2007 it has been Marta's focus since launching it in 2003 as a personal project with hired guns to back her up. Asked if she is at all surprised to have lasted almost 20 years in the trenches, she admits this is the only place she could ever imagine being at this point in her life.

"I will be honest with you: if you had asked that question a few years ago I would have told you that yes, I'm surprised it's been this long. I remember when I started playing in bands, I didn't expect much. I just wanted to create music, to have fun with my friends, and to perform. In Poland there aren't many ways to push the music forward, especially classic heavy metal which isn't very popular here, there aren't a lot of musicians into this kind of music, so I was surprised a few years ago that I was able to keep doing it. But right now, no, I'm not surprised. This is what I want to do, and for my entire life I have been doing everything to be in the place I am now. I lost many jobs, I sacrificed many things to get here, and I don't do anything else except make music. A lot of people helped me a lot along the way, like my husband; without his help we probably wouldn't be speaking today. I really appreciate every moment that allows me to be here and do this. I don't want to do anything else."

"This year is my 30th Anniversary of me in music," Marta adds. "When I was seven years-old my father sent me to music school, and even back then I knew what I wanted to do with my life. I saw an orchestra play for the first time and I wanted to be a musician. I am so damn lucky that my parents treated the dream of a young girl seriously."