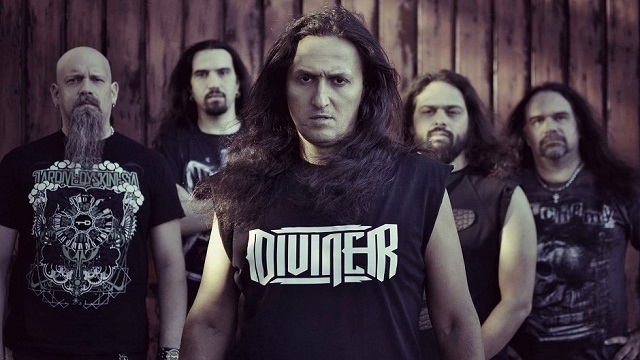 BraveWords: Greece has a great love affair with metal. What was it like growing up in your surroundings?

Yiannis Papanikolaou: “There is plenty of room for all kinds of metal paths in the heart of the Greeks. Growing up in a decade when the flower of heavy metal developed its strongest roots and flourished like in no other decade, my entire teenage memory is sunk in the thrills of discovering those new born heavy metal treasures of Iron Maiden, Judas Priest, Metallica, Slayer, Accept, Dio and all other Metal Gods. I can still close my eyes and find myself somewhere back in the ‘80s staring like a mesmerized child that I was, at the covers of my favorite records and spending entire nights traveling away at the sounds of Powerslave, Heaven and Hell, Painkiller, Master Of Puppets, Operation: Mindcrime, Number Of The Beast, Reign In Blood, Rust In Peace, etc. This sort of baptism found its way in the deepest corners of my being and therefor I could have never escaped this majestic call for heavy metal.”

BraveWords: Did you know what type of band you would become based on your influences?

Yiannis Papanikolaou: “Our influences covers quite a wide range of the metal platform. Some of those being easily noticeable, like the more classic origins of Priest, Metallica, Accept, Dio, Maiden, while others represent more up-to-date references of modern sound and approach like Iced Earth, Annihilator, Megadeth, Halford's and Dickinson's personal projects. I always had in mind that I wanted this band to combine the strongest elements of metal in its peak of influence with an aggressive and solid, fresh execution and production. You can never fully know what to expect of an outcome until all members of a band are added to the recipe and each of them works his own magic. Diviner very soon formed one solid scheme where all different components work in benefit of the final result. So, yes, I knew what direction I wanted us to take, but it was not until the rest of the guys joined that the pieces of the puzzle all came together.”

Yiannis Papanikolaou: “Well, I can definitely say that for me to begin this Diviner songwriting journey towards the Unknown became a lot more enjoyable and relaxing at the thought that I am sharing it with my most beloved friend and life-long music partner, Thimios Krikos. We have worked as one mind for the preparation of Fallen Empires' song skeletons, while each of us mastered his individual field; be it riffing and production for Thimios or lyrics and the whole vocal coordination for me. Of course, the atmosphere of songs is never completed until Herc adds the third dimension to the sound with the bass, George sets the guitars on fire and Frankie brings on his drum guns of mass destruction.”

BraveWords: You bring a modern and fresh element to an old-school metal style. How did you go about accomplishing this?

Yiannis Papanikolaou: “This is the blessing of having an awesome producer in your band! Like I said when we started this discussion, this blend of fundamental heavy metal origins with a fresh feel was the number one goal for Diviner. There is no ‘step 1 - now step 2’ constructional plan for this to work out, it just seems that our chemistry and vision as musicians clicked and the timing was right. This, and the fact that if you are all about something, it will surely come out in your music.”

BraveWords: Ulterium Records has a great rep for signing young, melodic metal bands. How did this relationship form?

Yiannis Papanikolaou: “Having spoken of blessings, Diviner's signing up with Ulterium Records has been definitely among the most important of them. We had been familiar with the label for many years now, due to its long and trustworthy partnership with Thimios' other metal band, Innerwish. When we were done producing Fallen Empires, we received this proposal to join Ulterium and thus, our search in finding a respectable label ended before it would actually begin, since we found all we are looking for and did not need to look any further.”

BraveWords: Fallen Empires was produced, engineered and mixed by Thimios and co-produced by yourself. What were you going for production-wise?

Yiannis Papanikolaou: “Thimios' long experience in production as well as our being open-minded about experimenting were definite assets in our benefit. There was a dangerous pit we had to avoid falling into: being left with an out-dated sound of the ’80s, coming up retro and unoriginal. Those obstacles were happily surpassed by the fact that we are all fans of modern references in metal music. Thus, elements of a groovier, more aggressive and straight-forward approach have deeply influenced the way we compose, perform, and speaking of myself, even the way I sing and present myself in verbalizing Diviner's concept in the present. When sounding over-lyrical or high-pitched power-metal-like vocalist is rather outdated.”

BraveWords: All the tracks have fantastic riffs. How did you go about constructing the songs on the album?

Yiannis Papanikolaou: “Well thank you very much on behalf of both Diviner's guitarists. It was obvious that there was no way we could reach this raw, solid and intense heavy metal sound we had in mind without relying on some serious riff-based structures. I'll have to give good credit to Thimios and George for the way they both handled the riffing and lead guitar sections of the songs. Let me throw in some personal hint for the future: it was amazing to find out in rehearsals, now that the team has grown strong together, that riffing ideas come in "storms" for future use and they are wilder and heavier than ever.”

BraveWords: Any upcoming touring plans in the works?

Yiannis Papanikolaou: “There is nothing we would enjoy at this time rather than getting ourselves on the road and bringing Fallen Empires to life by breathing some live energy into it. It's the beginning of the year, so a lot of touring plans are currently under construction. We are working closely with Ulterium to come up with a schedule soon and be able to announce our heavy metal invitations to everyone. For the time being, the confirmed date I can refer to is Diviner's upcoming show in our hometown Athens, scheduled for February 21. We more than look forward for this long expected night to be the best energy shot to open a long program of gigs.”

BraveWords: For a relatively new band with its debut album just released, what do you hope to achieve or accomplish next?

Yiannis Papanikolaou: “This, alone, could be a very long discussion. I will sum things up by saying that Diviner are old for self-centered crazy ambitions, outdated by our global crisis and Times of Change, but young and eager enough for all sorts of unexpected adventures and true priceless heavy metal journeys. The ship has sailed my friend, and we are sailing along with it. May the waves of metal be kind to Fallen Empires!”