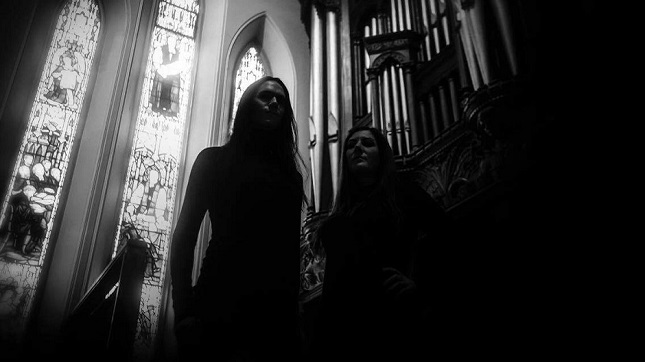 Antiqva is an idea spawned at the end of 2015 by Ne Obliviscaris vocalist Xenoyr and Cradle Of Filth keyboardist / backing vocalist Lindsay Schoolcraft. Of mutual minds, they craved more from extreme music, and so wanting to combine the darker elements of classical music, church organ, Gregorian chant, and the potency of black metal guitars, they set out envisioning a way to bring this creative endeavour to life. Their mission is to pay homage to an old, live and organic feel, and so fuelled by a drive to bring forth honest music from their niche genres they have attracted a confident team of experienced musicians who also believe in their vision. Together, they hope to captivate and move their audiences bringing that black, burning spirit back to life.

Antiqva is fronted by the creative director, harsh vocalist and lyricist Xenoyr. Lindsay Schoolcraft is the core composer, bringing forth her love of classical music by utilizing most voices and instruments found in an Orthodox Church practice, however not simply limiting her vision there. Guitarist Urzorn (Negator) contributes the acquired black metal guitar base that compliments Schoolcraft's composing. Drummer Justine Ethier (Blackguard, Karkaos) plays a crucial role in collaborating with Schoolcraft on completing the classical pieces and bringing a more intense atmosphere. Guitarist Andy Thomas (Black Crown Initiate) brings a different blend of attack in guitar work as well as to contribute soaring, clean male vocals to the mix. Providing the pulsing depths is Memnock (Susperia, Abyssic) on bass and contrabass. Finally, the outlandish cellist Dalai (Dirty Granny Tales) adds her touch of solemn and haunting darkness.

BraveWords: What was it that drew you the two of you together and made you decide that putting a band together would be a worthwhile venture?

Xen: "It's a bit of a long story, however in short, the idea was brought up in Rome when Cradle and NeO were touring together in 2015. We both craved another musical avenue to express what we couldn't do so in our respective bands. I'd been planning for years to attempt something more black metal orientated, as I knew NeO would never go down that path, and needed an avenue to pursue my darker tastes. I love what we do in NeO, but black metal is not something that NeO is… NeO is a vast array of influences, various shades of light and dark, and many colours. Antiqva is something else altogether."

Lindsay: "This is something that I really wanted to do because when you meet someone and you have the same creative energy, it's stupid not to make it happen. Me and Xen spent a lot of time together on that first tour in Europe. We'd get coffee together almost every day and then go out sightseeing because the rest of the guys would sleep in. It's rare that they would go out. I was up early every day and so was Xen. We got to talking, and we're certainly not unhappy in our bands, but Xen wanted to do something in a more black metal outfit and I wanted to do something more classically driven. I presented small bits and pieces of this material to the guys in Cradle a few years ago, and they thought it was cool but it didn't fit with the sound that defines the band. In the past Cradle had more of that classical vibe and they've been moving in a different direction.

"With the new Cradle Of Filth album, as long as those guys are happy, I'm happy, and I'm there to do what's best for the band. But, a lot of the stuff I had was being left at the wayside and I told Xen about it. He loves classical music as well, so I sent him some demos which were just atrocious (laughs). But, it was something we wanted to do because we seem to share a brain; I tell people Xen is my evil twin and we were separated at birth because we're so much alike. We decided to go forward and make this happen in our free time. Obviously we feel some pressure because NeO is becoming more and more popular, and Cradle Of Filth is a big band to a lot of people, but Antiqva is something fun for us and I think we need that outlet." 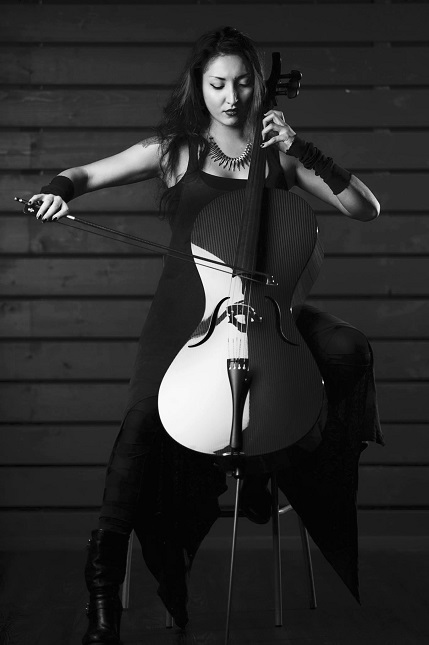 BraveWords: Given the long distance working relationship you guys have (Xen in Australia, Lindsay in Canada) why was it important to have a fully fleshed out band, and from various parts of the world? You're the evil geniuses behind this, and you could have gone ahead just the two of you and done everything yourselves.

Xen: "I appreciate your faith in us, you’re far too kind. It’s a lot easier for musicians these days to be in different countries and to still work together. It would never have worked with just the two of us; we’re limited in what we can do, and why not fill the band with musicians who are far better than us at their own instruments? Keeping it limited would only hamper our intentions, so more minds create a more expansive field in which to explore. Lindsay and I both know why it’s important to be open-minded regarding our own limitations. Granted it takes longer in some aspects when getting others involved, but at the end of the day the result is far better."

Lindsay. "We're actually going to re-record everything you heard on the demos live. Between crowdfunding and our connections in Montreal, we have the means to make it happen, it's just going to be a slow process. Two of our members are in Germany, two are in Canada, so those are the countries that are going to be our hub. Canada is where we'll record and finish the album, Germany will be our hub if we have shows or festival offers." 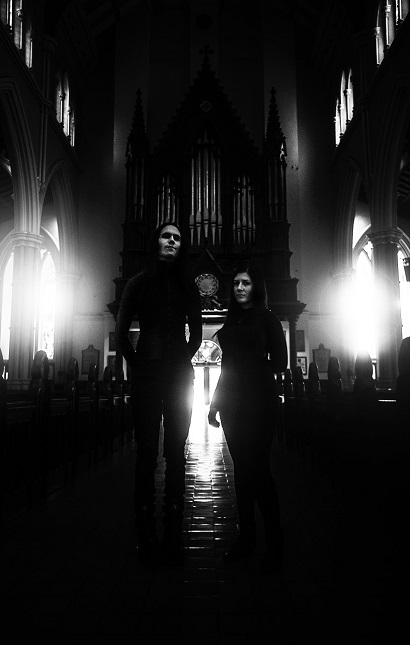 BraveWords: I admit to being surprised by the demo tracks. I think I was expecting something more in line with the Schoolcraft material. Was it clear the music was going to go in this very dark and heavy direction or did it just evolve once you started exchanging ideas?

Lindsay: "My solo work is in a different realm. There are two sides to me, dark and darker, and I've had this stuff inside me that just had to come out. I could have given it to Cradle but it wouldn't have fit, and this is what I want to do with metal. I'm not mad at the Cradle guys at all for not using the songs I did submit and I'm not running away from the band, but I didn't want to leave this material behind. I wrote so much music by the end of 2015 that I finally hit a wall and told Xen we had to find a guitar player so I could finish the songs."

Xen: "The music was always going to be different to what Lindsay does with Schoolcraft. Our goal was to create something far different and darker than our bands, but also to pay homage to both '90s black metal and classical music. There would be no point in the band if we were doing the same thing."

Lindsay: "Antiqva has actually turned out to be darker than I expected, because Xen looks like the Lord Of Darkness but he listens to the Schoolcraft stuff and wants to work with me. I initially asked him if he was sure about that, but I became comfortable in my classical composing abilities that the stars aligned and the universe said 'Okay, just do it.'"

BraveWords: How much influence to the other members of the band have on the material, or are they "just" players meant to bring your ideas to life? I'm not discounting their contributions, but I wonder if you're open to them altering or improving upon your songs?

Xen: "The other members absolutely have influenced the material that’s been written, they've written a lot of it. I see it as more of a collective, however we do steer things in the direction we want if needed. Everyone in the band needs to be able to contribute and feel part of it otherwise there's a chance things will fail in that area. If someone isn't into it then they wouldn't be involved...and this project is not just about Lindsay and myself."

BraveWords: But at the end of the day the two of you are calling the shots...

Lindsay: "Me and Xen usually call the shots together because this is our project. Xen is the frontman, the screamer, the graphic artist, the photographer, but it's me, Justine and Urzorn that are the main composers. Somebody had to take the reins when it came to writing the songs so I took on that role. I've learned a lot from Cradle being an international band so I know how to make it work. If nobody had stepped up we'd still be sitting there trying to figure out how to kick things into gear (laughs)." 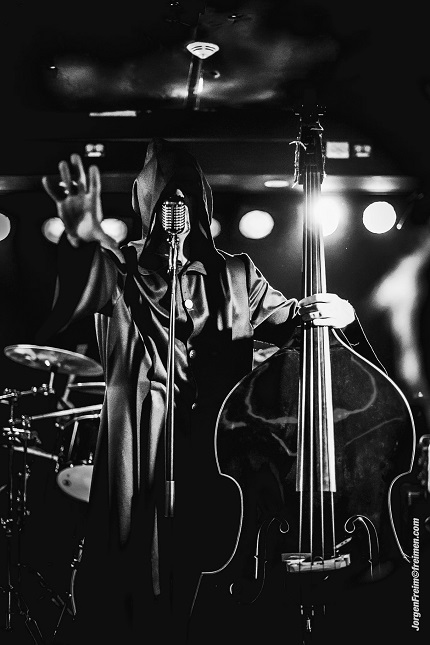 BraveWords: Antiqva is a band rather than a mere side project, correct? With that in mind, how do you envision Antiqva beyond putting out new music? Is touring a consideration, or do you think it will remain a studio band for the time being?

Xen: "This is a side project and a proper band. We do have our main bands but that's not to say we wouldn't put the same effort into it. Touring would be good, however that would be quite some time off should it happen as our priority is creating the rest of our debut release first. We will be putting all our effort into that process, and considering all the orchestral elements needed, the process requires a lot of attention. Then there's the consideration around everyone's main bands touring schedules, especially since most of us seem to be releasing albums this year. We all have high hopes as to Antiqva's future, and so we look forward to sharing the complete vision with everyone in due course."

Lindsay: "If we're approached later on and have the possibility to tour or do festivals, I know that we would be able to do it because of all the experience the members of Antiqva have. There's also a mutual vision and a shared goal between the band members which is really nice. I know the true test, though, is when you go on tour because that's when you find out what people are really like (laughs)."

BraveWords: And finally, Lindsay, just to be clear, you are not leaving Cradle Of Filth...

Lindsay: "If people want to talk shit they can because you can't stop the online trolls, but no, I am not leaving Cradle. I mean, why the hell would I leave? I've given four-and-a-half years of my life to that band and we just finished recording a new album so I'm not going to up and drop it. That would be stupid."