MOTÖRHEAD – Lemmy’s “Being Remembered In A Million Different Ways” 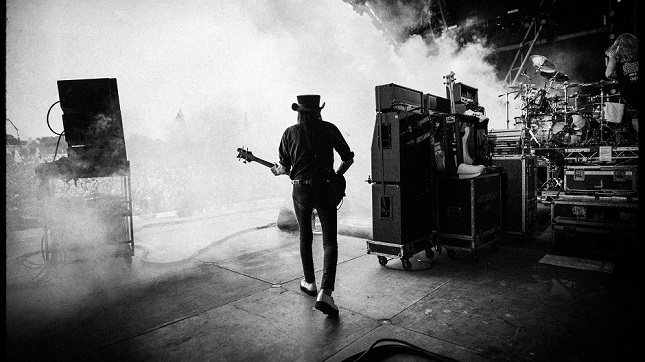 In what is the most significant bit of Motörhead news since Lemmy’s sad passing December 28th, 2015, the band have issued a collection of their covers, focusing just on the lineup with drummer Mikkey Dee and guitarist Phil Campbell (with a couple small exceptions). Under Cover contains a bunch of material that most astute Motörhead fans would have likely heard by now and even collected (i.e. across various tribute albums), but anchoring the collection and providing the most value is the band’s touching cover of David Bowie’s “Heroes.”

“Obviously, most fun is ‘Heroes’ because it’s not been released before,” explains percussion legend Mikkey Dee, now securely ensconced as new drummer for Scorpions, after the departure of James Kottak. “That’s actually the last recording ever that we did together. Because we recorded that after the record was done, so that’s the last thing. So that is sticking out for me. And the rest of the songs, a lot of these were made so long ago that I barely remember anything about them (laughs).”

Indeed many of these tracks, such as Metallica’s “Whiplash,” Twisted Sister’s “Shoot ‘Em Down” and Rainbow’s “Starstruck” (featuring a vocal by Saxon’s Biff Byford!) were done for tribute albums over the years. Under Cover gathers these up, helpfully, in one place, allowing for comparative debate over what they sound like through the Motörhead sausage grinder, which ones work, which don’t, which fit Lem’s world view, which seem like the work of a contrarian who is all too willing to surprise his audience.

“We were talking about skipping a record years ago, actually, and just doing a cover record,” answers Mikkey, asked how “Heroes” came about. “The idea was to release one every other year. And we were talking about picking four songs each but unfortunately we never got to do that. But over the years we’d been recording a song here and a song there, for different reasons, for bonus tracks, or with Bob Kulick when he used to do his compilation cover records and stuff. But here at this point, I wanted to cover ‘Strange Kind Of Woman’ by Deep Purple, a shuffle, and Phil was talking about ‘Heroes’ and Lemmy had a couple other ideas. So we were picking at least one or two songs each just to record them so we could use them for bonus tracks or just for the hell of it. Because we were finished recording the actual record, Bad Magic, and we had some more time to spend in the studio. And when Phil suggested ‘Heroes,’ Lemmy was not very keen on that. He didn’t think he would do a good job on it; it wasn’t really his type of thing, maybe. But after we recorded it, he thought it was the best track out of the whole bunch. He enjoyed it, really, really much. So no, it turned out okay. And he did a hell of a job. It’s a great song to cover.”

But no “Strange Kind of Woman?” “No, we never did it,” says Dee. “We did this one and then we did ‘Sympathy For The Devil,’ and that one ended up on the record. And then we kind of lost the idea of recording more tracks. We said, well, we’ll do it later on. But eventually we were going to maybe pick four songs each that we kind of decided on. ‘Sympathy For The Devil’ was all of us. We were talking about it and then we just started and everybody was onto it right away. So that one was a natural thing.”

The oldest tracks on the album reach back to the March Or Die album, an agreed-upon low point in the band’s career, when the personnel was in flux and there was a clumsy grappling with the idea of going mainstream, what with being signed to Sony. On that record, Mikkey only drums on “Hellraiser,” included here (a semi-cover, long story), whereas “Cat Scratch Fever,” also included here, finds Pat Travers legend Tommy Aldridge guesting.

Taking us back to those years, Mikkey explains that, “Lemmy had been asking me over the years to join the band, but he kind of nailed bad timing, actually. First he called when I was with King Diamond. We were touring together and he offered me the spot in Motörhead and I turned him down because I was very happy with where we were with King. It was a bunch of friends and I didn’t jump between bands; I was very happy where I was. And then the second time he called me was when I was on my way out on a 12-month tour with Don Dokken. So of course I wasn’t going to burn Don. And we had a pretty neat, cool band together there, with Peter Baltes on bass and John Norum and Billy White. So I was looking forward to that as well. And at the same time, with that said, I felt that I wasn’t ready for a band like Motörhead, to tell you the truth. Because I wanted to put some more experience on my shoulders, if I ever again had a chance to join the band. I had an idea of what Motörhead was all about, but not until I actually joined, I realized what it was, you know? Just the fact that it’s more than just a band. It’s a lifestyle; it’s a legacy. I mean, more true fans I don’t think exist anywhere (laughs). And I knew all this of course, but not to the same extent I learned later.”

But it was Tommy Aldridge who would up drumming most of that record, with classic era drummer Philthy Phil Taylor on his way out, showing up for work on only one song. 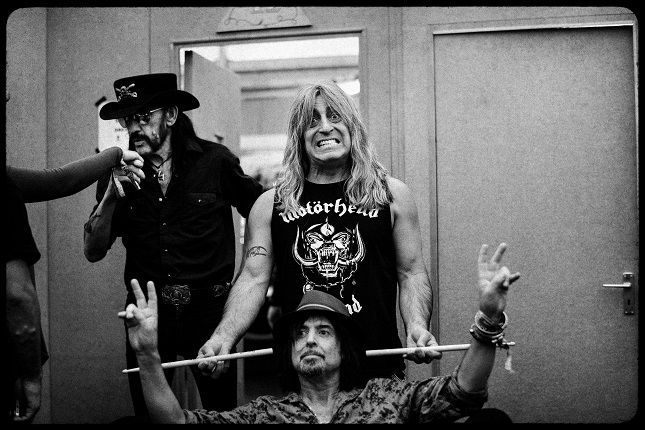 “He just lost it,” says Mikkey. “I don’t think he was happy. I would say it was the exact same thing that happened to Wurzel (co-guitarist on the album with Phil Campbell), unfortunately, you know? He lost interest. Once you lose interest, it’s just not fun anymore. And when it’s not fun, you’re not going to sound good. And to be able to tour and do what we do, you have to really love being on the road. And these guys just seemed to have lost it, in some way, shape or form. They just didn’t enjoy it. With Philthy, Lemmy had said to me, you know, I don’t even know if the guy wants to be on the road anymore.”

With Mikkey joining, things got fixed fast—1993’s Bastards is a barnstormer of a classic, the record that kicked off the inspiring string of albums to follow, each built by the stable trio lineup we’ve grown to love over the past 30+ years.

“Bastards is such a huge difference in everything coming from March or Die, which was a record that was... I wouldn’t say Motörhead was in trouble, but they definitely had a few problems at that time. Both with members in the band and producers and the business side of it. They were more of a mess, an uncontrolled mess, I would have to say. That’s what myself and Todd Singerman (long-time manager) kind of stepped into. And with Bastards we wrote as a band, all of us. But I really got a kick in the ass from joining these guys. So it was a mutual, you know, happy days, to tell you the truth. We all got inspired off of each other.”

Now, with a bit of distance, I asked Mikkey to reflect on what Lemmy’s legacy is turning out to be. 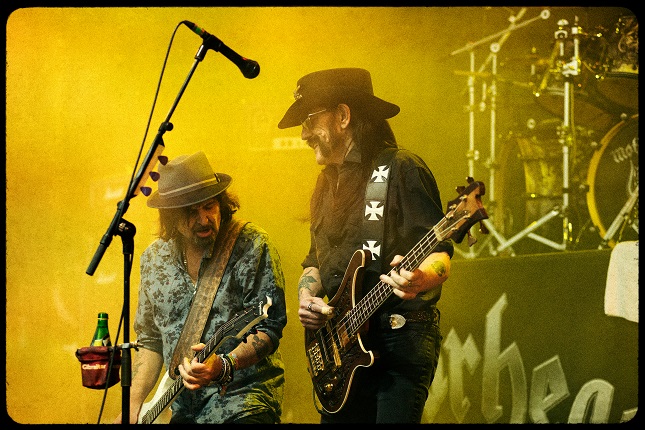 “Oh, he’s being remembered in a million different ways. He was a poet, you know; he was so good with words. That’s why Ozzy always called him to work with him, and a lot of other entertainers as well, because he could put words together like no one could, really. He scribbled a lyric down in 15 minutes that people might be struggling for months to put together. He just took a napkin and wrote the best lyrics that you could imagine. He had a very, very easy way of that.”

“But we all have our own kind of relationship with him, in different ways, shapes and forms. So I don’t know, I just think and hope—and I already know—that he’s being remembered in a proper way. Because, you know, when he passed, it’s been bigger than Elvis. He would be very, very surprised and honoured if he knew. He might know, if he was peeking down to see what’s going on. I mean, if you saw what just happened at the Wacken Festival, for instance, with a hundred thousand fans raising their hands while they played the new video, for ‘Heroes.’ That was the release of that song, kind of, and it was just incredible. They’re naming streets after Lemmy; they’re naming all kinds of parks and stages. So no, it’s quite amazing.”

In closing, Mikkey confirms that, “Yes, I am absolutely Scorpions’ drummer (laughs).” And asked what surprised him about working with the exacting Germans versus the long-standing trio of characters that was Motörhead, he figures, “It’s almost the same. It’s two legendary bands. It’s just different ways, shapes and forms, in a way. I mean, you have four guys to go out with that give 110% every show, as opposed to just two. And they’re very, very professional. They know what they want; they know how they want to sound. And I’m just a part of that. I’m changing their sound a little bit, and I’m putting me into Scorpions, which they want—and I want. So overall, it’s heavier, it’s tighter and hopefully a little bit better, you know?”

An interesting assessment, begging the question, on which songs might we hear Mikkey’s stamp the most?

“With Scorpions? Pretty much every song I’m playing a little differently. I read it a little differently than, of course, any other drummer would do. I try to put my personal niche to what I’m playing right now. The guys love it and the fans seem to really dig it and the media are more than happy with what they hear. So it seems to work pretty good, you know? Same thing I did with Motörhead when I first joined that band—I was not interested in being a Philthy Animal Taylor replacement. I was gonna put Mikkey Dee on the map right away, and you either have to accept that or you don’t. You know, I’m playing with the guys and you’re not—that was my attitude then and that is my attitude today.”