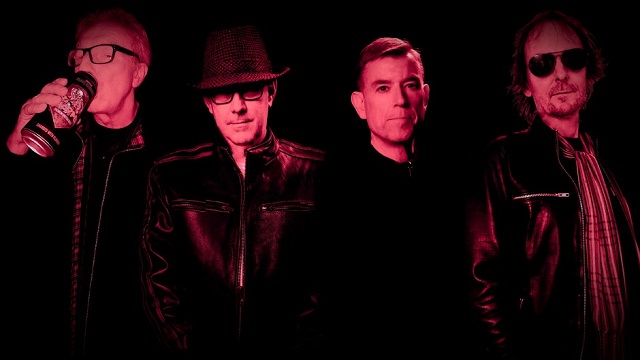 It’s complicated, but Séance, a concept album touched by the glowing finger of the paranormal, is worth the explanation. What we indeed have here is a masterful romp through the late ‘60s, but created by storied punk veterans, namely Alfie Agnew (Adolescents, D.I.), Sean Elliott (D.I., Mind Over Four), Paul Gray (The Damned, UFO) and Rat Scabies (The Damned). Lovers of busy, sinewy bass lines and manic drumming rejoice because of the UK connection, but it is the California hook-writing of Sean and Alf that makes this record move so swiftly through the tale.

“The overarching story concerns a group of friends who hold a séance in order to say one final farewell to friends who have passed,” says Elliott. “While in the supernatural fog, they visit purgatory and hell. Ultimately, the nature of their reality gets a sobering check with a twist ending. Additional characters make appearances. All is not as it seems.”

“I think it’s a bit more grown-up, to be honest,” notes Rat, on Séance vs. the band’s earlier records. “It’s kind of matured. I don’t know, there’s still a lot of energy on the record, but the last one you would probably describe as being more of a punk album. But this one’s kind of going back more to pop roots, although there’s a lot of variation on the record in style, kind of ducking in and out.” 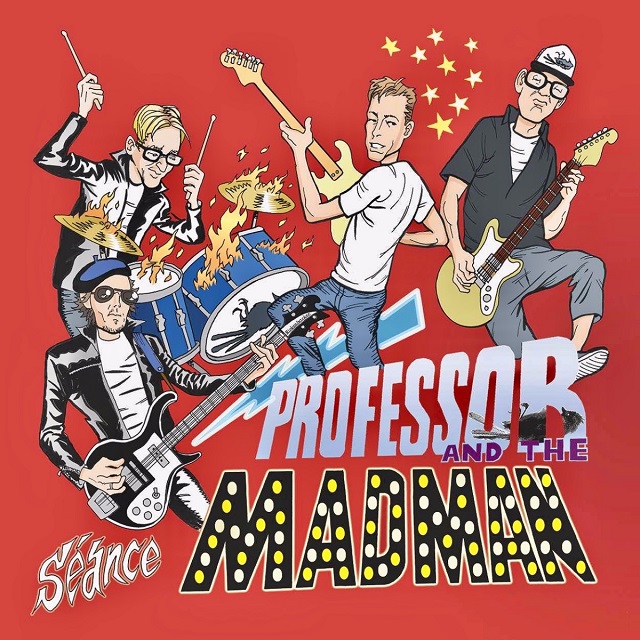 As for reuniting on record with Paul Gray (the two did The Black Album and Strawberries together back in the early ‘80s), Rat says, “He’s a great bass player. It’s been really good working on this with him again. We hadn’t done anything, I don’t think, in 20 years, or maybe even more. That’s the thing. You forget what made something work and why it was good. I just really enjoy his playing, and the realization of how well we locked in together. I guess you’d call it empathy.”

Concerning his own performance, Scabies says, “I get so familiar with what I do. I’ve been doing it for such a long time that most of it’s about instincts, really. I tend to follow the melody line and the vocal. It’s really what dictates what I play; those dynamics. And what happens with the guitars, because I’m a big guitar fan.”

Adds Paul on the results, “It’s a whole potpourri of different styles. One of the delights of working with these guys is I haven’t got a clue what’s going to land in my inbox next. The writing style that they write in is mind-blowing. And I think that comes with, you know, the ages that we’re all at and the huge variety of influences everybody has had along the way. They seem to have melded this crazy potpourri of styles this time that references so many people but still sounds completely like them. It’s a very smart record, and that’s before I put my bass on it (laughs).”

But Professor And The Madman is not the only project the two Damned legends have going. Rat is part of a surf duo called The Sinclairs, whose debut album, Sparkle, was issued in May. Explains Rat on the idea for the act, “It was really the guitarist, Billy Shinbone and it’s something about the sound of those guitars that has a magical thing going on and made it really instinctive. We didn’t really think of ourselves as a surf thing. That was going to be the initial flavour of it, because of the guitar, really, but then we got the synthesizers and Theremins out and bass pedals and just messed around and experimented a lot with what we were doing and come up with something that didn’t necessarily sound great when we’d come up with it, but then you could maybe manipulate it and suddenly you had something that sounded really different. I think we found an unnerving sort of quality to it, in a way. Otherwise it just would’ve been a record of a guitar player and a drummer sort of knocking out surf, really. We didn’t really want to do that.”

As to why they called the band The Sinclairs, Rat says, “a few reasons, really. One, there was no other band using that name (laughs). The other one is, it’s about that sort of… they’re all instrumental, so maybe we’ll get some synchs and some fees and some soundtrack work from it, and then this Sinclairs name, oh, that’s a catchy, showbiz sort of tag (laughs). And then of course there’s my interest in the Grail, and Rosslyn Chapel and places like that, and the whole sort of story, which the name Sinclair is strongly associated with.”

At the bass end, Paul Gray has a second record coming out in November with his guitarist mate in The Damned, Captain Sensible, as the Sensible Gray Cells. “Yeah, that’s Captain and myself and a guy called Marty Love who plays with an old friend of ours, Johnny Moped, who is a great kind of punk rock British artist but very, very wacky. They supported The Damned last year on a British tour, and we thought Marty would be good for the project, which he proved to be. Captain and I have always got on really well, and we’ve got a shared love for the same kind of music as well as a kind of telepathic way, I guess, of working together. I love his guitar style.” 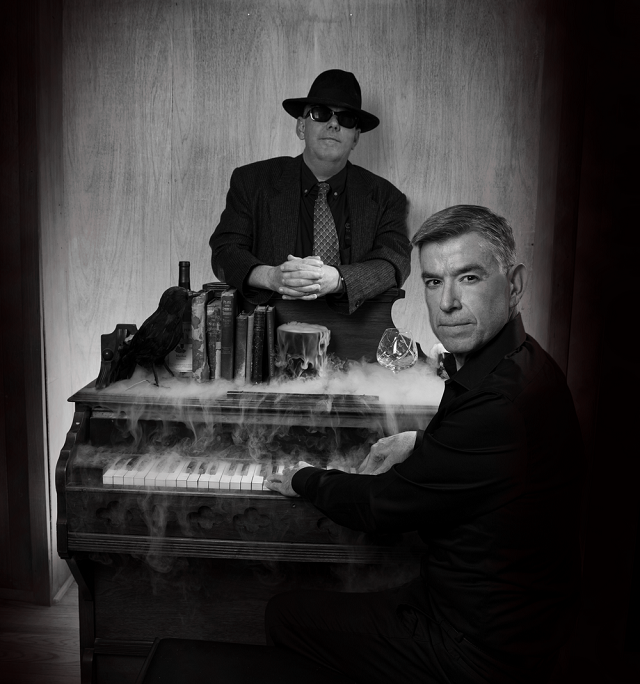 “I mean, I ludicrously over-play a lot of the time,” chuckles Gray, “but nobody’s actually told me not to; it tends to work with the bands I work with, luckily for me. And Captain’s got great ways of combining rhythm and lead playing at the same time. I just really like the way he puts chords together. He’s a melody man, the same as me. We both got a shared love of pop, you know, cheesy pop, any kind of pop. And I think that comes out in the way we approach playing our instruments. And these days, we send each other stuff from our laptops and it’s so easy to put the guitar parts on or put a bass to it. It’s the same way I work with Sean and Alfie. We started recording Sensible Gray Cells right before lockdown. Luckily we got most the drum tracks down, and pretty much everything else. The bass, guitars, the keyboards, all the vocals, we’ve all done at home and just send the files to each other. Sean and Alf had actually ended up mixing seven or eight of the tracks on it, so there’s a nice kind of connection and affinity there. I loved what they’d done so much, I sent some files to Captain. They sounded great, so they ended up mixing about two-thirds of the album (laughs).”

Finally, Paul’s got the new Damned EP, The Rockfield Files, out in October. “None of the tracks are left over from Evil Spirits,” explains Paul. “They’re all brand-new songs. ‘Black is the Night,’ that’s an extended version, I think. I think there was an edited version done for the last single. ‘Keep ‘em Alive’ was one of Captain’s kind of psych songs. The other two, ‘Manipulator’ is one of mine; I think that’s the next single, and ‘The Spider & The Fly’ was something that I had had quite a long, long time ago, and I played it to Captain, and he said, ‘Yeah, that will work well.’ So he changed it about. He added some really good bits to it. But this is from the last sessions that we did—a year ago, I think, almost to the month—at Rockfield, with Pinch (drummer, now ex-The Damned), before he left. So it’s kind of a nice way to go out with his legacy.”

As far as the production goes, “We had a guy called Tom Dalgety. He’s done Ghost and he did Royal Blood as well. So he came along, nice chap, and got some really good sounds and that. Obviously everything’s been a bit thrown up in the air this year. It probably would have come out a bit earlier, I would think, had the tour we had lined up happened. Still, it’s been pretty busy for yours truly.” 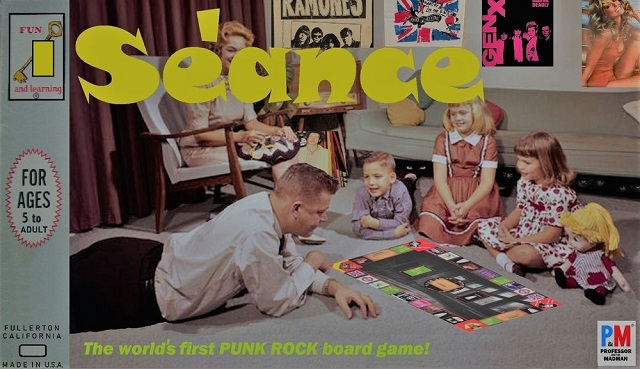 Definitely though, the key masterwork out of all this is Séance.

Remarks an obviously pleased Paul, “The first time I heard it, the songs for this album, in many ways it was kind of like this strange, twisted mixture of the kind of psychedelic bands that influenced The Black Album, mixed with the pop rock sensibility of someone like Cheap Trick. Or the twisted stuff from the Beatles, where they’re kind of most inventive. With some kind of nice garagey ‘60s stuff thrown in, which is all what I love. You have to approach every song different with these guys, because it’s not all pop songs, all rock songs, all garage songs, all punk songs; it’s more like a kind of musical journey that you might get from a musical, without it being pretentious. It never gets into that, you know, overblown pretentious area. Just when you think something is settled, there’s this kind of musical curve. ‘Well, where the fuck did that come from? That’s an interesting one.’ And it makes you reassess your whole approach to playing and listening to it. It’s incredibly inventive. I’m not sure how they do it. They’re very prolific as well. Just when I think I can rest now, here come another couple of files. I don’t know how they do it.”