There's a music snob stigma attached to progressive metal and prog rock based entirely on one's chosen approach. Young musicians with hearts set on the brass ring try to out-"Metropolis" Dream Theater at every turn (yeah, good luck with that), the diehard fan(atic)s will argue at length as to why their heroes can do no wrong even when the latest epic is clearly a cut/paste car crash of odd time signatures and über-noodling, and the traditional metalhead legions scoff at the thought of math pits versus mosh pits. Early on in their career New Jersey progsters Symphony X were seen as yet another band to be emulated, worshipped and slagged for their niche brand of music, but they've broken free from that particular cell block in a big way. It's a process that began in 2007 with their Paradise Lost album - a metal slab nobody had counted on - took root in 2011 with Iconoclast, and has now grown into something particularly ominous with new outing, Underworld. Symphony X is still prog metal, absolutely, but it's nice to hear a progressive band that's not trying to blow away their listeners with 16 time changes in five minutes just to prove they have the chops.

Ask guitarist Michael Romeo and he'll tell you Underworld is about the songs as a whole, not the flash inside them.

"We were talking about doing different things after eight albums," he says. "The Rush album Moving Pictures came up a lot in conversation because every song on that record is great. Yeah, there's some progressive stuff on Underworld but in the end there are just great songs on the record. The only thing we were really thinking about was trying to not to repeat something we've done. We wanted to do something a little bit different but have the elements of what people know from Symphony X."

"The goal was for things to be cohesive and to the point, and if the songs catch people off guard, cool. Yeah, we're a progressive band, so there's nothing wrong with putting some measures in 7 somewhere, but we do it without taking away from the songs."

"With every album we do there's tons of stuff left over," Romeo adds. "There's a fucking pile of riffs, melodies and ideas, and at the end I'm saying 'I'll save this stuff for next time and get a head start...' but I've never used the leftovers (laughs). It's because that music was written at a certain time for an album, and Underworld is totally different. Those unused ideas will sit there until the end of time. Underworld has a different feel lyrically and conceptually, there's a different theme, so the music had to be written specifically with that in mind. It would be the easy way out, to rummage through the unused material, but that's cheap."

Paradise Lost was regarded as a huge step away from the traditional progressive approach of its predecessor, The Odyssey. It was a big risk to take six albums into Symphony X's career, but Romeo insists they've never second-guessed that decision.

"The fans are pretty receptive to the musical direction we've taken, so there's never been any of that sort of thing."

Symphony X vocalist Russell Allen - also known as the frontman for rockers Adrenaline Mob - has always gone against the grain when it comes to progressive metal singers. What he lacks in the genre's typical high range prerequisite he's more than made up for with big and fat meat-and-potatoes metal execution. It's certainly never hurt the band, and Underworld shows off another facet of his vvoice.

"Yeah, the vocals a little cleaner," Romeo says. "That's just because the material is different. I put a lot of emphasis on the melody for the these new songs, so Russell's vocals were the right approach for each song. I think everybody in the band knows what's right for a song at this point. We don't try to write songs this way or that way, we just let it happen naturally after doing this for so many years. That's the good thing about Russ; he's a natural singer so he doesn't really need to prepare. Once he's in there and hearing the stuff he knows what to do with it."

According to Romeo the music for Underworld was shaped around the concept for the album, which was inspired in part by the 14th Century epic poem, Dante's Inferno, and the Greek legend of musician, poet and prophet, Orpheus.

"It was pretty early on. The first couple of months were about getting into the zone, get our studio legs, and try to comer up with some ideas. Dante's Inferno came up, we talked about Orpheus in hell. We tried to mesh it altogether without making it sound too much like we're trying to tell a story. Underworld is meant as a more personal kind of thing. Once the music took shape everything else kind of fell into place. There's a lot of dark imagery in Orpheus and Dante's Inferno, and it was cool to mesh it all together, make our own thing, make it personal and modern."

At the same time, Underworld was influenced by the here and now.

"There were definitely topics that we talked about. We kept hearing all this negative shit about the music industry, and I saw one documentary with a lot of music industry guys on it. I think it was Rush's manager who was talking about the internet and sales, about putting out records that only have one hit on it. They were saying how we'll never have another Moving Pictures or another Dark Side Of The Moon, solid albums from beginning to end. Some of that was in the back of my mind when I wrote this album. I want to keep the music alive, man" 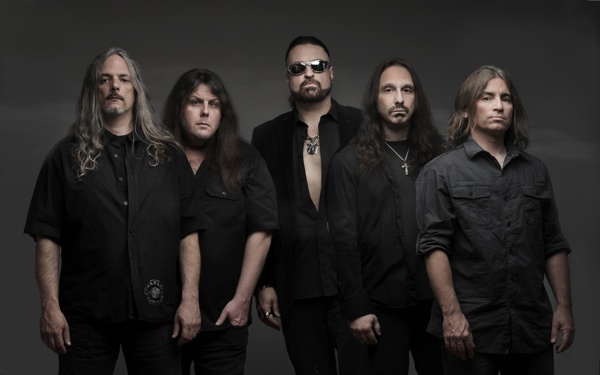 "I had most of the lyrics and Mike Lepond (bass) had some too, so we bounced musical ideas around as things were getting done. Once everybody was in on the whole idea everything was cool when it came to writing. We put it together piece by piece."

When Symphony X started in '94 / '95 they were dubbed a neo-classical prog metal band thanks to a sound that mimicked Yngwie Malmsteen to a large degree, particularly where Romeo's playing was concerned (check out The Damnation Game and Divine Wings Of Tragedy). Underworld plays out like heavied-up version of Fates Warning classics Perfect Symmetry and Parallels, offering up compact and melodic songs loaded with technical fireworks. Take tracks like "Without You", "Legend" and "Run With The Devil", it's fair to say that if Rush was a metal band they would sound like Symphony X.

"Thanks for that (laughs). It's just an evolution over time. When we started the band I think that was the big common link between me and Mike Pinnella (keyboards). He's a classical piano guy and I love all that classical piano stuff. Over time, though, we wanted to go back to the big old school riffs like Sabbath and Priest. As far as the guitar playing, I'm always thinking about what's cool for the tune. There are some neo-classical link here and there on the new album, but I agree with what you're saying. I think it comes down to whatever works for that specific album. The important thing is that the passages or certain parts don't sound out of place."

Underworld hits hard, heavy, fast, and boasts a motherload of genre specific trademarks, but it never becomes the tedious exercise it could have been. It's one of those records that sounds like the band was saying "You want a prog metal album? We hope you're wearing a cup..."

"(Laughs) I hope that's how it comes across. I hope it's well received. But, I think most metal bands are different from all this pop shit when it comes to writing music. Most bands don't try to write one hit and then throw a whole bunch of filler behind it. When that happens a lot of people are saying 'Fuck that, I'm not going to buy this.'"

Bottom line, Underworld is a fun bit of mayhem to listen to. It doesn't sound like it was built to satisfy fan or record label criteria, but rather to welcome everybody along for the ride.

"Once it gets to that point I'm not even interested in doing it. The music has to be real. The vibe in the band and the overall performance of everyone in the band, the energy, there's some real magic in the music. Not that there hasn't been on previous albums, but this one feels really good."