THE AGONIST – “This Is Not Just A Battle…” 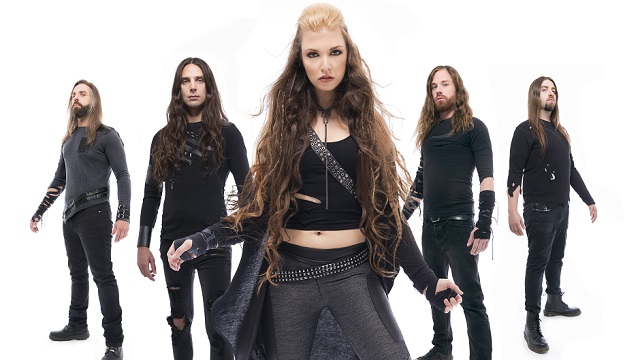 Take a look at the viewer comments left as (burnt) offerings for the three videos The Agonist posted in the weeks prior to the release of their new album, Five - "The Chain", "The Moment" and "The Hunt" respectively - and you'll find the band has a very loyal yet painfully divided fanbase. Understandable given the parting of ways with original singer Alissa White-Gluz (now with Arch Enemy) in 2014 and the addition of Vicky Psarakis in her place, but the haters aren't merely complaining about the vocals this time out. No, it would seem that those who would try to do The Agonist harm with insults and assorted trolling when Eye Of Providence was released in 2015 are taking issue with the songwriting on Five, the riffs, the production, the mix, even the promo photos, as well as the vocals. Guitarist Danny Marino isn't one to let the negativity that has surfaced get to him because he knows Five is a bold step forward for The Agonist, and the band still has a legion of open-minded supporters.

"It's hard to judge positive and negative reactions based on comments made on a video," he says, "but even if they're mainly positive the negative comments speak louder because they jump out at you. I think it's important for any band to look at it that way. For example, I remember when Opeth went through their musical shift a couple albums ago and decided to continue on that path. It wasn't pleasant for them (laughs) but I think they're more successful now than they've ever been in their career. It took some time for people to adjust to their new direction. It's very subjective. All we can do is keep putting out music and seeing people show up to watch us play. That's how we know we're doing something good."

Psarakis had big shoes to fill in replacing White-Gluz, and touring for Eye Of Providence was her trial by fire. If you trust the evidence provided by the almighty YouTube, it could be said that she had a rough beginning pulling off the clean vocal / gutteral scream transitions that White-Gluz made The Agonist's trademark when the band surfaced in 2004. 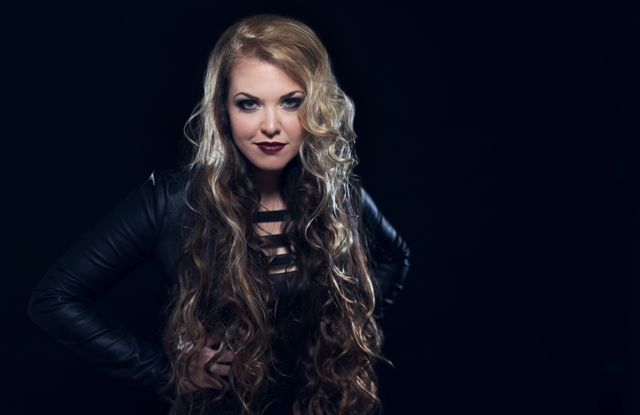 "I think it took a bit of time like it would with anyone to gel and find a perfect chemistry on stage," Marino admits. "We already had that connection as people - we got along right away, we wrote songs together very easily - but it's different touring together. Vicky has never been in a hard touring band before, so she was learning the ropes being with us. Now, a couple years later, she knows the deal just as much as any touring musician about what it takes, how to treat yourself on the road, how to treat other people. We had to learn all that on our first tours as well. I'm really happy with where we are now. I feel were gelling better than we ever have. Before we didn't gel at all, there was a lot more separation between us and our singer, so The Agonist is more of a single entity now."

"The chemistry comes from having a lot of communication during the songwriting process," he adds. "There's a sharing of lyric writing, we comment on certain lyrics and vocals if we think something needs to be moved or changed. I've learned so much from having these open lines of communication that I could never go back to not having that."

As mentioned, the songs on Five show a different to The Agonist that goes well beyond Psarakis establishing herself as the band's singer. Once known for murderously technical and intricate song structures, the new material is stripped down, streamlined and loaded with breathing room. That isn't to say it's weak or lacking - that's up to the indivudual fans to decide - but Five seems to echo what White-Gluz said when she left for Arch Enemy, that The Agonist as the fans knew it was "over."

"It's not an insult," laughs Marino. "And yes, we opened up a lot and we do understand the importance of letting a song breathe. We understand the importance of letting certain members of the band take the spotlight at certain times instead of several people taking the spotlight at the same time. It's been an evolution. Eye Of Providence was a bit like that, and we took it further on Five. I think part of it has to do with Vicky coming in, and part of it has to do with the natural evolution of where I want to go as a songwriter, where I get satisfaction out of my songs compared to where I got it in my twenties. It's not just me; you hear differences in the drums as well, for example, so it's part purposeful and part natural. At the same time I hate pigeon-holing myself in that if you ask me if things are going to continue down that path for the next record, I'd say I don't know. I don't want to continue progressing down that road to the point that it does become to easy or simplified with nothing to challenge the listener. I like the balance we have on the new record."

That balance is what has effectively transformed The Agonist into a band that sound a lot different from the one that brought in fans with "Business Suits And Combat Boots" and "Thank You, Pain".

"The songs on Five play to our individual strengths, knowing what they are and when to show them instead of everyone always being on 10," Marino says, addressing the lack of complexity in the new songs. "Let's say you're playing a part where guitar-wise it's extremely simple but the vocal is extremely challenging and difficult. If I was doing something extreme and Simon (Mckay/drums) was blasting, like we've done on Lullabies For The Dormant Mind, the vocals that are supposed to be the lead part of that section get buried a bit. Lyrically as well, it's hard to focus on what's being said because there's so much shit going on."

"One thing that we changed about the screaming in the songs was that if Vicky's going to do it, it should be when she's saying something that she should be screaming. It shouldn't be a case of 'Oh, this part sounds cooler with screams...' even though it makes no sense to scream the lyrics. On Five we were a little more thoughtful about what we we're saying and how we're saying it."

"There's been a shift not only musically, but lyrically as well in the sense that we wanted to be able to do songs where we could really connect on an emotional level with the listener. Before, a lot of times before the lyrics were so intricate it was almost like purposely challenging the listeners with 'I bet you don't understand what this means...' whereas now we want to try and speak to them so that anyone can grasp the lyrics conceptually or emotionally. We want to deliver the lyrics musically in a way that is very heartfelt so that they mean something more than words on a page. That accounts for some of the space you're hearing in the songs."

The tracklisting for Five seems to hint at a concept behind the music, with the songs listed as events or specific things ("The Moment", "The Ocean", "The Raven Eyes" and so on). Marino reveals there isn't a solid concept that pushed the songs, but one did materialize as they wrote.

"It came about half way through working on the album. As we were compiling different songs and different lyric sheets, me and Vicky noticed that a lot of our songs were written like short stories featuring a character as opposed to songs we've done previously that might have been about a subject matter, like the ways of the world today. We created these short stories, and some of them ended up linking with each other. I wrote the lyrics to 'The Raven Eyes' and Vicky wrote lyrics for 'The Trial', and we noticed how the songs sounded like they were about the same person in two different scenarios. We augmented those stories and now they are linked, like Part 1 and Part 2. Doing that, I thought we could make the album thematic through the song titles and they became something like chapters in a book."

"The song order is important. We tried to make it a sequence of events that could loosely make sense as a journey, as well as the dynamics of the music that build up to a crescendo, dropping off in the middle section, then building things back up in a three song package."

As this interview took place while The Agonist was on the road in Europe, it made sense to circle back and ask how Psarakis is faring now that she has real touring experience under her belt and has mastered her own take on metal screaming, having cut her teeth as a clean singer.

"I think she adapted pretty quickly, but in a touring sense and doing all these vocal things live she's progressively getting better and better," says Marino. "She's able to scream better now than I've ever heard her, she's even better than when she tracked the new record. It's like, I wish I could go back a re-track the screaming parts on the record now (laughs)."