TREMONTI – “People Who Think They’re The Best, Die Just Like The Rest” 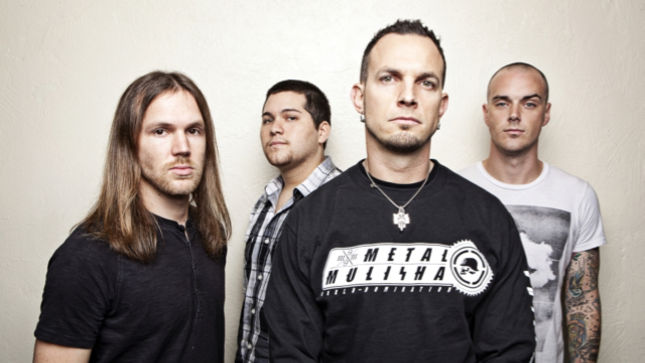 “That character (pictured on the album cover, which can be seen below) is kind of like this Armageddon character who comes to the Earth and cauterizes the Earth of its impurities; Dust is the aftermath of that,” says Tremonti vocalist and guitarist Mark Tremonti, speaking about his band’s newly released third album Dust, which is the companion piece to last year’s Cauterize.

Title track “Dust” is certainly one of the standout songs on the album. “It was my favourite tune on the record. When I was splitting up the two records, I wanted there to be a real anchor track – one that you name the album after. On the second record, that track was ‘Dust’,” explains Mark. “It was one of the first songs that I really started piecing together when I started writing both albums. It had one of my favourite choruses, so I wanted to make sure it got put together. As soon as I started stumbling around with the verse music, I put the two parts together and the mood seemed to fit well.”

Another brilliant chorus can be found in “Catching Fire”, during which Mark sings: “The whole world’s catching fire again, the hardest thing is knowing that we could have just died instead.” Tremonti shares his muse exclusively for BraveWords readers, “When I sang that line, it kind of reminded me of when you watch a movie or read a book… like the book The Road (by Cormac McCarthy), where you have these surviving people on this horrible existence. It would have been easier to be one of those who died earlier on and not had to suffer through the end of what’s to come.” Kind of like The Walking Dead? “Yeah exactly, same concept.” In the second part of the chorus, Mark goes on to sing “The preacher, he is dying alone. The young man he is crying; he’ll make this world his own.” “It’s just speaking of the irony of the people who think they’re the best of us, die just like the rest. That song is kind of about how mankind is eventually going to destroy the world. The preacher who died alone – no matter what kind of life you’ve lived, it’s not going to matter in the end.” 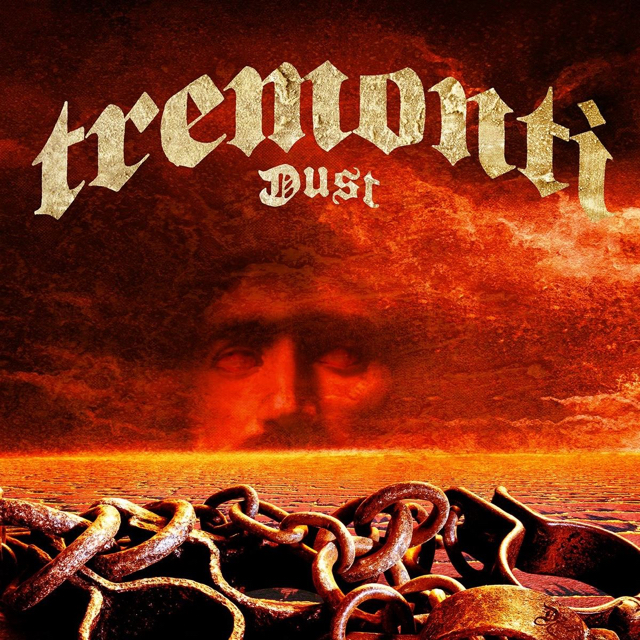 Joining Mark Tremonti in the studio for Dust – which was recorded at the same time as its predecessor, Cauterize – were guitarist Eric Friedman, bassist Wolfgang Van Halen, drummer Garrett Whitlock, and producer Michael “Elvis” Baskette. Unfortunately, Wolfgang will not be participating in the upcoming UK and European tour that runs from May 27th to June 24th. “Right, we have Tanner Keegan on board touring with us now.” Is this the end of Wolfgang’s participation in Tremonti? “It all depends. When we went on tour for Cauterize, it was when Van Halen had started up; he was just too busy with that. Now he’s started working on some solo material of his own. I think it came down to, is he going to play bass in my band, or is he going to do his own thing? I think he’s got like 25 songs partially recorded; he’s working on that now. I’m sure he’ll chase down his own vision, cause Tremonti is my vision. I completely respect it.”

Exactly two weeks after Tremonti plays its last European show, Mark’s other band, Alter Bridge, begins touring North America. Currently, AB shows are booked from July 8th to August 24th; that really doesn’t leave any time for Tremonti to play Canada or The United States in support of Dust. “We’re just going to fit The United States in next year the best we can,” admits Mark. “When Myles (Kennedy – Alter Bridge vocalist) and I switch from Slash and Tremonti over to Alter Bridge, then Alter Bridge will have first dibs on any time frames, and we work around that with our other bands. Then when it comes back to the other side, Slash and Tremonti have the front seat and Alter Bridge has to fill in. So it’s kind of a juggling game.”

Returning to the ten songs that comprise Dust, closing track “Unable To See” is just beautiful. “I didn’t want to leave out that side of my songwriting; that’s a big part of me,” testifies Tremonti. “I love slower, melodic, more emotive type songs. It doesn’t have to always be heavy. That was one of the statements I wanted to make with the first single, ‘Dust’. Every record we come out with – whether it be Alter Bridge, Tremonti, or Creed – you’ve always got to release the hard-hitting track first. I wanted to put the spotlight on the more melodic stuff, and ‘Unable To See’ is definitely the most melodic song on the record. I grew up loving that kind of thing. I grew up in Mom and Dad’s car listening to Rod Stewart and ‘70s soft rock; then I became a metal head after that. So I kind of combine those two worlds, but I’m still a sucker for big emotional tunes.” 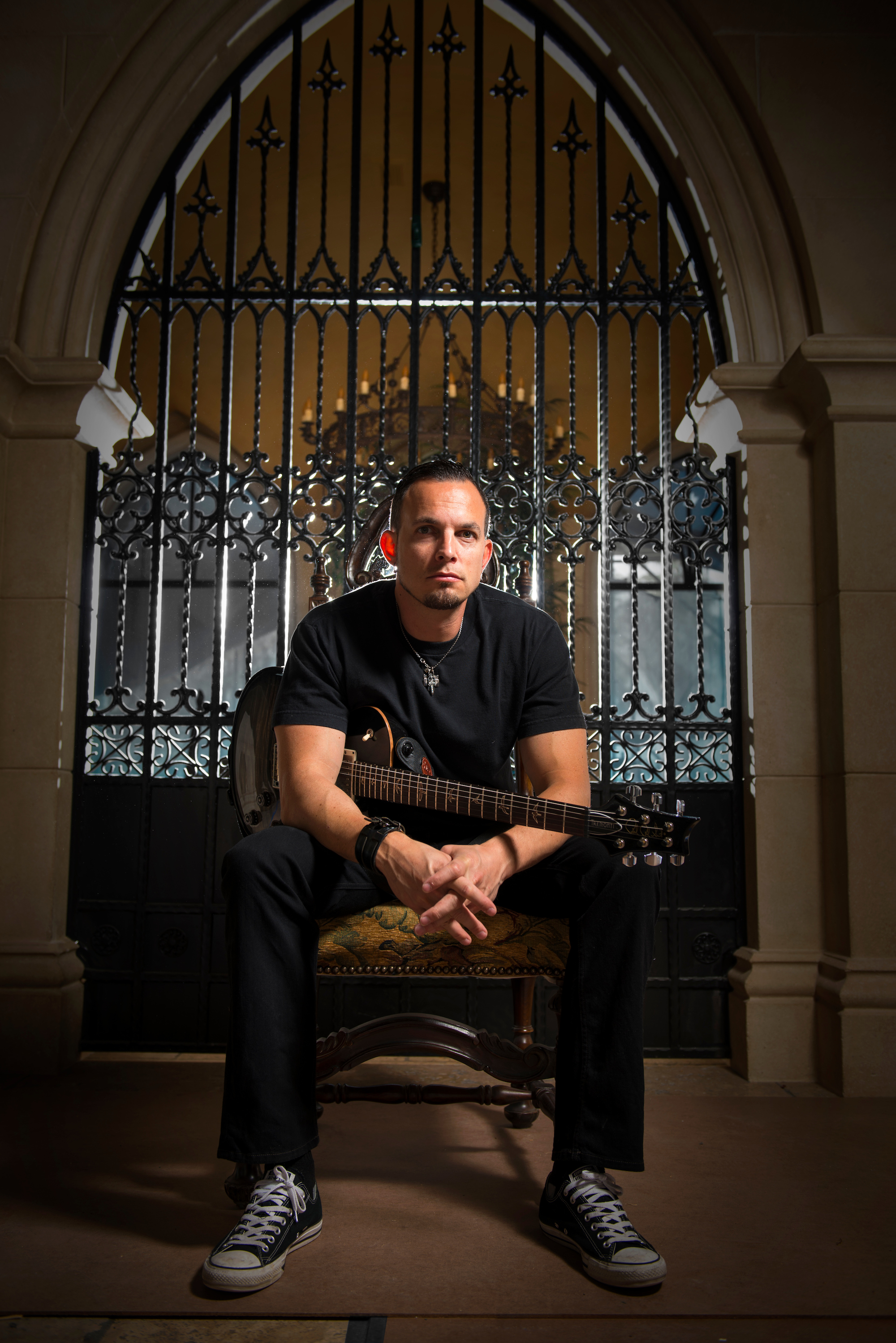 First and foremost, Mark Tremonti is known as a guitarist. But now, with the release of his solo band’s third album, the reputation as both a lyricist and vocalist is beginning to cement itself. “I’ve always been a songwriter. I’ve always written lyrics as I’ve gone,” confesses Mark. “Then usually whoever’s singing for whatever band I’m in takes charge and finishes the lyrics. I really think whoever’s singing should write the majority of what he or she is singing about so they can feel fully invested in it. Now that I’m doing the solo stuff, and I know 100% of those lyrics are coming from me… when I had to do 20 songs in this last session, it was a daunting task but it was a good challenge. After you get through obstacles like that, going forward I’ll never doubt myself. You just have to get through a record or two before you really get that total confidence you can do it.”

Without being completely transparent, Tremonti tackles lyrical topics people can easily relate to, thereby allowing listeners to personalize the song and make it their own. Mark reveals his approach to putting words to music, “I’ll scat vocals on top of whatever I’m writing at the time. I pretty much improvise vocals, almost like a rapper would,” jokes the mild-mannered musician. “I’m just trying to spit out whatever fits the melody. I think a lot of people would be surprised just how close the final lyrics come to what’s spit out at that moment. I’ll listen to these ideas over and over again to organize them. I’ll get used to the vowel placement and the rhythm of the lines; then when I go back and finalize lyrics I’ll try to mimic it as closely as possible. It makes it easier for me to fill in all the lines. I’ll have a key sentence that really creates the subject matter of the whole song.”

Mark isn’t one of those guys with notebooks – or USB sticks – full of ideas, words and phrases to pull from. “No, I have all these individual parts and pieces of songs. When it comes time to do a record, I’ll go through all my favourite ideas and I’ll write lyrics for every idea I have. I’ll make sure I don’t spend too much time on it, cause at times 80% of it doesn’t get used. I’ll make myself write a part in five or ten minutes. Sometimes when you don’t think too much about it, it sounds more natural. If you don’t try and get too clever with it, it sounds more believable.” The question beckons, who does Mark admire as a lyricist? “I think Myles is one of the best lyricists I’ve come across. He’s a brilliant lyricist. There’s so many great ones. There’s a lot of lyrics throughout the years that if you go back and really listen to them it’s like, what does this even mean? But it still works.” 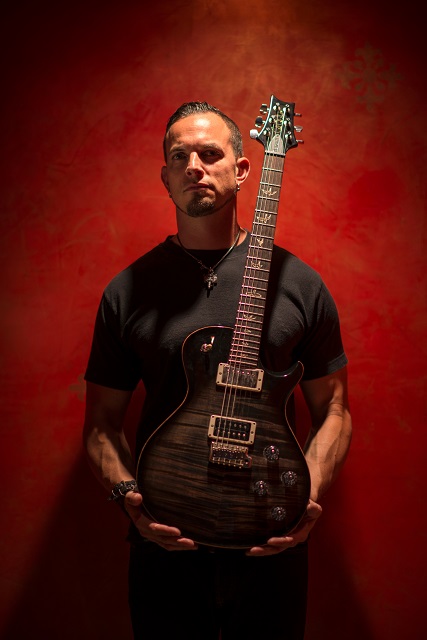 Mentioning Myles, he along with Mark, drummer Scott Phillips and bassist Brian Marshall, are in the midst of recording Alter Bridge V. “We are getting to the point where it’s time to sing vocals. I’ve finished overdubbing the acoustic guitars, I have one more guitar solo to lay down and I’ll be done with guitars. Myles has got 13 more songs to sing; he’s only laid down one so far. There’s 14 songs total. We’ll probably narrow it down for the album release, so we’ll have a handful of B-sides.” The tentative release date for album number five from Alter Bridge is September. “That’s our target date. You never know, but that would be perfect for us.” Will the album have a title beyond the Roman Numeral V, meaning five? “Yeah, it’ll have a normal title. We just don’t have it yet.” Of course, everybody wants to know what it sounds like? How does it compare to the previous Alter Bridge albums? “I think it’s a good mixture between Fortress and Blackbird; it covers all bases.”

Alter Bridge made some really cool options available for fans who want to spend a little bit more money, such as: framed album art, one of a kind disposable camera photos, your name in the liner notes. “When we offered all these things up, we wanted to make sure both the band and the fans – everybody walked away with something they’re happy with. At the time we did that, we didn’t have a record deal or a publishing deal, or anything like that. We had to self-finance the recording process, so that’s what we did. We offered up guitars and lyric sheets, VIPs for life, so we could pay our producer (Michael “Elvis” Baskette) to record this album.”

There are those who would argue that with today’s technology, the album could be recorded at home. “No, no, no. Elvis is an incredible producer, engineer, and mixer. He’s got one of the best soundboards; you can’t just do that with Pro-Tools on your laptop.” Are these recording sessions moving along at about the same pace as the previous ones? “Yeah, it takes about a week to do drums, a week to do bass, and two weeks to do rhythm guitars. Then, Myles will sing about a song a day, and I’ll do three or four harmony vocals a day. We like to make sure it’s perfect.” Are there any unexpected surprises such as a guest appearance or cover song? “No, those are two things we’ve never done. I think once we open that door, some of our friends are going to be like, ‘hey man, why don’t you invite me to be on your record?’ It’s like, who do you choose? If it was Robert Plant – yeah, we would totally do it. But if it was just one of our buddies, some of our other buddies might get mad.”