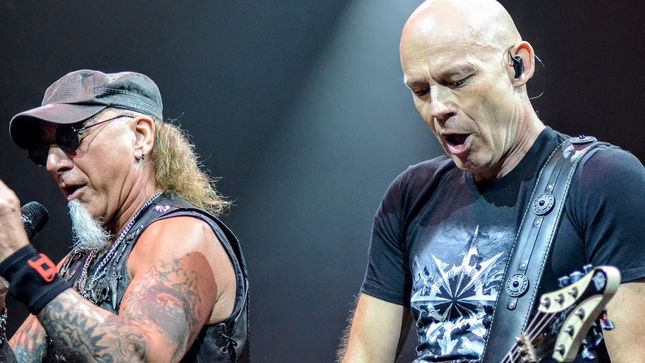 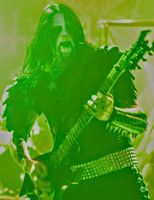 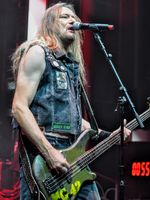 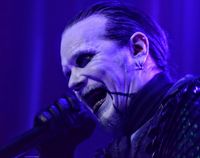 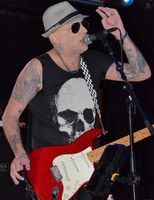 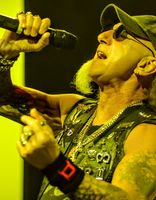 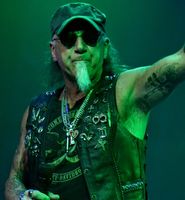 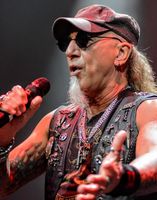 After wasting Wednesday in Buffalo, the snow and cold canceling almost every flight, the only option was to drive back to Toronto and leave the next day... the day the Independence Of The Seas leaves port! More weather delays on the Canadian side of the border and by the afternoon, having just touched down in Florida, the time to board the ship had (to coin a phrase), set sail. Thanks to modern technology: shots of passports sent directly, via I-phone, to the promoter (aka “The Skipper”), did the Hendersons (Metal Tim and his wife), manage to. Probably didn't hurt that (rumors suggested) one of the Finnish bands was also waylaid, but helps to have friends in high places, as well as being a co-sponsor of the event!

The boat was almost two hours late, leaving the dock. Bands were already playing and proggy tinged Dutch fem-metal outfit Delain were onstage in the newly rechristened Royal Theater, the biggest of the three indoor venues and the pool deck is converted, overnight, into a stage that can be viewed from multiple levels and virtually 360 degree. For those that have cruised before, there were noticeable capital improvements onboard, lots of new eateries/bars and renaming of old favorites. Plush, padded fold-down seats, with three tiers, the theater/ballroom room feels like a symphonic concert hall, just maybe not this extended weekend. In a matching ensemble of skin tight, red vinyl pants, boots and halter top, the well-toned and newly blond lead singer Charlotte Wessels looked amazing. Seems like married life agrees with her (tying the knot with love of a dozen years). Was off to meet a friend, for Týr, the oft semi-naked outfit from the Faeroe Islands, whose Viking inspired rhythms were once unique, but have since been corrupted by scores of imitators. We joked about their (lack of attire), including regaling a story about how they skinny dipped, backstage at Bang Your Head, years ago, eventually breaking the inflatable pool. Just as well, don't think anyone was that keen on entering (despite the hot temperatures) after that “display.” Lo and behold, today, all members were covered, top-to-bottom, when offering “By The Sword In My Hand”, as a small pit broke out on the converted Ice Rink floor (a venue plagued by lighting and/or lighting operator issues, throughout the cruise): more jig dancing than slam dancing on display.

Plenty going on, although sometimes a stage or two overlaps, meaning those of us trying to cover “lots” of bands (visually or in print) frequently see just a few songs of each. Dark Funeral were afforded the big ballroom. Meanwhile, primarily the under-30 crowd who headed to the Lounge, for costumed rockers Twilight Force. Had to see if the Swedes would fall over their tails on the dime sized stage (albeit increased in area since the last cruise). Between the hands raised in triumph and those with cellphones, capturing memories, nearly impossible to see the cos-play musicians. Even though this was something of a beach vacation, some photogs were initially dismayed that flip-flops and Tevas (i.e., anything deemed open toe) weren't allowed in the photo pit: lest some barricade invader, another photographer or even security guard accidentally crush their toes, and then sue the organization and/or cruise line. Still amazed at those drinking their Bud/Bud lite at $7 or $8 a pop (12 oz. Can) when Fosters oil can is $11.25 more than twice that volume.

Bloodbath saw singer Nick Holmes (Paradise Lost) in a full suit & tie get-up, surrounded by his shirtless, blood splattered, zombie-looking bandmates. All were enjoying Fosters, in large tins, as the Ice Rink, with seating on three sides, was packed. On the floor, a red lit mosh erupted during “See You Die”. Thought Metal Tim was in attendance and planning to cover, but I was wrong. Off to the ballroom, for Accept, with guest bassist, Danny Silvestri, subbing for recently departed mainstay Peter Baltes. Crazy, but singer Mark Tornillo is now the second longest tenured Accept member, behind guitarist Wolf Hoffman. Basically headlining the first and last nights, both sets were identically begun, “Restless and Wild” up third, following “Die By The Sword” opener and “Stalingrad”. Continuing a trend witnessed last summer (when Baltes was still around), the singer is much more animated. The upbeat, blue lit “No Regrets”, the only other offering from the recent Rise Of Chaos disc, sees the two guitarists together, center stage. “Shadow Soldier” is followed by another classic, “Princess Of The Dawn”, complete with audience participation. Pink/green Tornillo and Hoffman center stage, as many of the younger fans jump around, getting into it. “Midnight Mover” began a run to the end featuring some of the strongest (ie fan favorite) material, past and present, including the likes of “Fast As A Shark”, “Up To The Limit”, “Pandemic”, “Metal Heart”, “Teutonic Terror” and the ubiquitous set ending “Balls to The Wall”. Great stuff!

Meanwhile, in the ice rink, fedora wearing frontman Johan Edlund takes Tiamat across a career retrospective. Most North Americans haven't seen the band since an opening jaunt for one of the post-Dio versions of Black Sabbath, decades ago. A full run through their monumental Wildhoney was reserved for Saturday, after midnight. Similar time of day/night for this show, the music venues from gothic to almost pop sensibilities (Edlund strapping on a guitar for some tunes), mixed with atmospheric doom and faster tempos. Speaking of speedy, my night ended with Sodom. Tom Angelripper and his newly augmented quartet (with return of Frank Blackfire, on guitar). Choices this evening were about evenly split between ‘80s landmarks and later eras: yellow lit “Sodomy & Lust” with “Blasphemer” up early, juxtaposed with “Crippler” and “Partisan”. Good to hear “One Step Over The Line”, always liked that one. Not exactly one’s idea of lullabies, but after Sodom, it's off to bed, as Friday is the longest day. Little did I know HOW long!