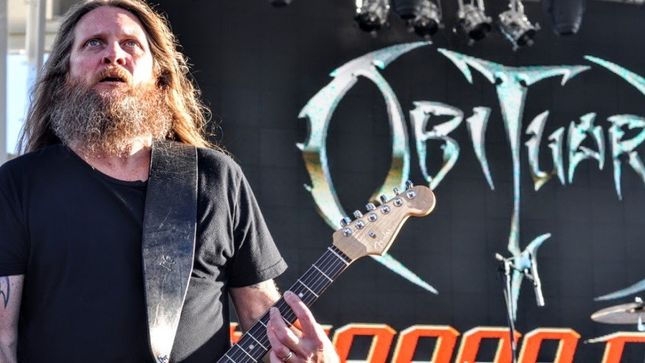 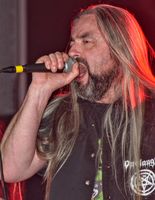 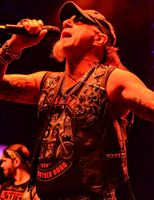 With each of the 60 bands having performed at least once, and some playing twice (thereby completing their commitment), there's less imperative to see shows. Perhaps that's why the last day has unofficially become a mini-Halloween, cruisers dressing up in costume. Overall, in the five years I've been attending, noticed a subtle shift in attitude, from the European motto of “See as many bands as possible and party along the way” to the more North American mantra of, “Come for the party and see your favorites along the way”. Maybe it was just the bands witnessed (although a fair cross-genre sampling) but the venues were never as packed as on previous cruises. Then, in the evening, there's the Super Bowl, this year hosted in the new sports bar. Force of habit, many fans plunked down cash for wings, despite having access to a free all-you-can-eat buffet, elsewhere on the ship (keyword, elsewhere).

Morning poolside sets from Visions Of Atlantis and Tristania had originally been on my schedule, but succumbed to the ennui of repetition, having seen both already. By 1:15, was ready to get reacquainted with Riot V, still holding out hope (in vain, it would seem) for more than a token Speranza/Forrester moment. While not a carbon copy of the earlier set, on the Pool deck, they again stormed out of the gates with “Victory”, singer Todd Michael Hall's hair blowing in the breeze. “Flight Of The Warrior” was followed by anthemic “Black Leather And Glittering Steel” and “Angel Eyes”. Mindmaze singer Sarah Teets reprised her flute intro to “Bloodstreets”. Sounded great, but still disillusioned at the lack of old Riot material, so headed downstairs early, to meet up with Night Demon, in the Lounge.

Good thing too, as was witness to an impromptu soundcheck that featured “Tonight I'm Gonna Rock You” (the Spinal tap nugget should be added to the setlist ASAP!) and Bryan Adams' “Summer Of '69”. Satisfied with the sound, the band opted to begin BEFORE their allotted time (a maneuver first witnessed at their initial Bang Your Head festival performance, thereby playing more songs for the fans). The Lounge was nearing capacity and a few songs later was joined by even more bodies, arriving at the original/prescribed time. Rather than let the logistics of the minimal stage, low ceiling and nearly impossible sight lines be a disadvantage, Night Demon made the proverbial (spiked!) lemonade, embracing the ceiling scraping stage divers (including in costume Thor, complete with hammer), as guitarist Armand John Anthony and Jarvis Leatherby pressed the flesh, the singer/bassist straddling the barricade for much of the set. Blazing “Welcome To The Night” kicks things off, the supercharged pace set was enhanced by crowd and band feeding off one another. 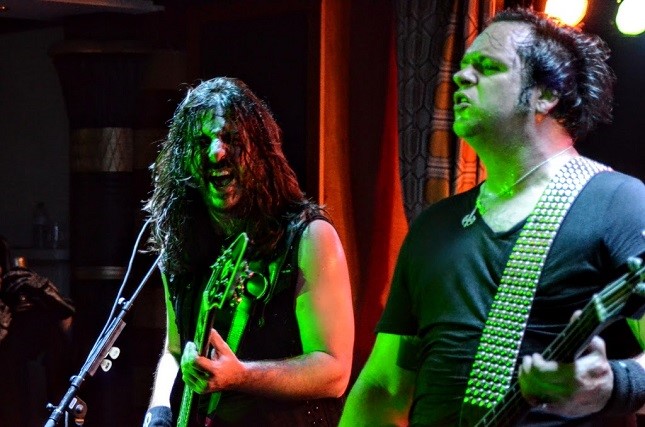 Word of the band's reputation certainly must be spreading within the musician community, as members of Riot, Vicious Rumors and old tour mates Accept, as well Steve Grimmett himself (on motorized scooter used to navigate the ship) were on hand. The Cali trio were up against the popular All Star Jam, which Leatherby characterized (from the stage) as, “Watching legends play music by other legends, but you guys would rather see future legends play their own stuff.” Cue “Full Speed Ahead”. At the barricade the singer led a fist thrusting expose (his bass occasionally banging the roof, somewhat purposeful, I believe) to start “Curse Of The Damned”. Neck on a swivel, the bassist ratchets his noggin up & down throughout, like a rabid woodpecker. “Heavy Metal Heat” to backed by “Road Racin'”, dedicated to the Riot guys in the house. The punchy “Hallowed Ground” signifies 20 minutes onstage and Night Demon have already tore through a half dozen songs! “Screams In the Night” follows, then an amped up version of Golden Earring's FM radio staple, “Radar Love”, dedicated to “All our Dutch bros and sisses”. Their mascot, Rocky, makes his usual appearance during “The Chalice” and then things got crazy. Embracing the time/place, Leatherby again pronounced the competing Jam, “All the bands the boat can't afford,” thus entered into their own impromptu cover session, featuring Black Sabbath's “War Pig” (forgetting one lyrics, he joked, “You guys know the words”) and “Wasted Years” (Iron Maiden), the track which actually concluded their live album recording, in Cleveland, but was left off the finished product, for legal reasons. Crushing performance and many stayed around afterwards to meet the guys. Trajectory continues upward, jump aboard for the ride!

In the bright sunlit, Obituary appear a little less scary, but the music is no less fierce. Trevor Peres looked like a sun tanned version of the bearded, disheveled “It's” character, who opened each Monty Python episode, and despite being Floridian, long haired (that's an understatement!) singer John Tardy wore a long sleeve. His brother/drummer Donald, could have been on a fishing trip, baseball cap and scarcely a care in the world. In reality, they were churning out brutality, in the form of “Redneck Stomp”, “Visions In My Head” and “A Lesson In Vengeance”. Meanwhile, down in the Ice Rink, Raven were dealing with another kind of darkness, a lighting director seemingly on vacation (maybe left in Haiti?), or an early defector to watching football. 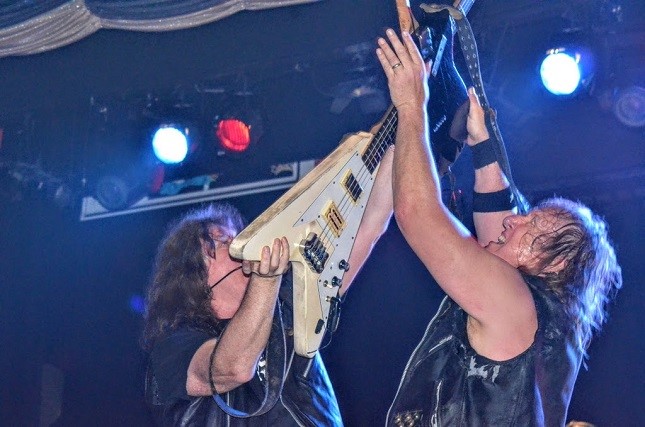 “Destroy All Monsters” opener was delivered without stage lights, despite John Gallagher's protests. They already went on late, due to a soundman unsure of what was happening. Even when the “lights” were turned on, for “Hell Patrol”, it was simply red, the whites trained on “no man's land.” Thanks? “All For One” is followed by unreleased newbie “Top Of The Mountain”, begun by Mark, on guitar, in typically frenetic style. “Tank Treads (The Blood Runs Red)” is fog shrouded (and again unlit). The bassist yelps through the thrash intensity of honestly entitled “Faster Than The Speed Of Light”.

Things didn't improve much, when UK thrashers Onslaught took the same stage. Anyone, Bueller? Regardless, Nige Rockett (guitar/lone original member) and crew spanned the 35 year career. After “Born For War”, they delved into oldies like “Fight With The Beast” and “In Search Of Sanity” as well as later day favorites “Sound Of Violence” and “Planting The Seeds Of Hate” before ending with audience enhanced “66Fucking 6”. 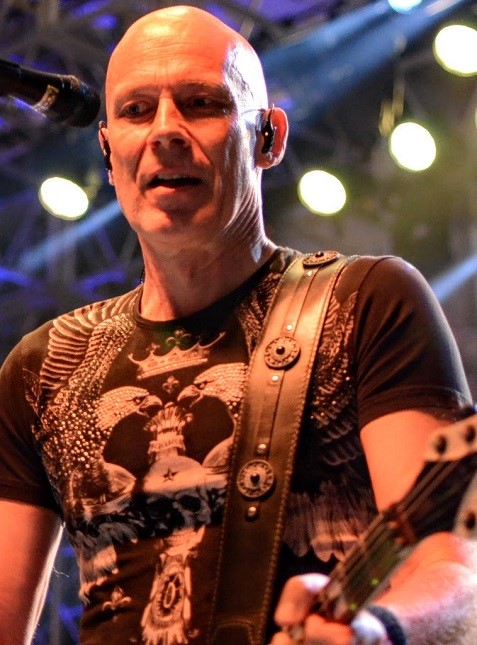 As THE biggest band on the ship, Accept were afforded the honor of closing, nicely bookending their virtual finale, the first night. While not identical sets, they both begin and ended the same, with some juggling and changes to the middle of the setlist. On the deck, rousing “Die By The Sword” opener is followed by “whoa whoa” sing-along of “Stalingrad”, but let's be honest, almost all the Accept material is so well know, people are singing throughout. Surprisingly early “Restless & Wild” really gets things moving. Tonight, the previously unaired (on this cruise) “London Leatherboys” replaces “No Regrets”, a fair trade in my book. Ditto the 2-for-1 swapping out of “Shadow Soldiers” for “Analog Man” and “Final Journey”. A green lit “Princess Of The Dawn” sees the return of strong audience voices, along with bobbing heads, as the wisps of fog quickly dissipate onstage.

In the absence of mainstay bassist Peter Baltes, it's all about Wolf Hoffman, the guitarist's legs splayed as he plays, often contorting his body at oblique angles and the occasional fist thrust, for emphasis. A veteran of the band's symphonic shows, fill-in bassist Danny Silvestri acquitted himself well, playing for the A team, opting for a headband, rather than free flowing mountain of hair. Inexplicably, “Monsterman” creates a rush of under 30 aged crowd surfers (perhaps that's all they know). For “Pandemic”, Hoffman ventures stage rock and locks in with Uwe Lulis, sporting a Cheshire smile. Little doubt who the headliner is, as all three tiers surrounding the pool are packed. Morseo than any other band, even the balcony encircling the stage has people in good spirits (despite the impending demise of the weekend), singing along to the likes of “Fast As A Shark”, “Metal Heart” and of course, “Balls To The Wall”, which tonight is NOT the finale. That spot actually goes to “I'm A Rebel”.

After the Skipper's thanks, it's time to say goodbyes and plan for 2020, when 70K will deviate, slightly, from the established itinerary. With the Super Bowl in Miami, fearing exorbitant prices for hotel rooms (for arriving bands & guests, if you could even find one), the organization has opted for any earlier January departure: sailing Tuesday through Saturday (January 7th-11th) to Cozumel, Mexico. Hope to see you onboard, next year.