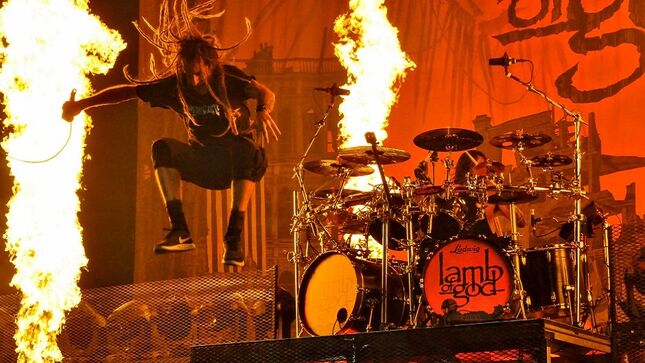 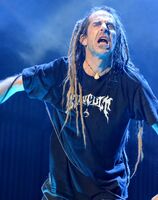 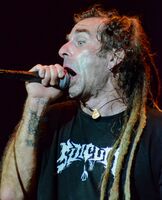 What was probably conceived as a tongue-in-cheek reference to the total lack of bands, on the road (when it was announced), the "Metal Tour Of The Year" stopped in Camden, NJ (across the river from Philadelphia) on September 15th. Early on, it was predominately the under-30 crowd, there to catch Hatebreed and Trivium, while the old heads partied in the parking lot (or down the street at Victors, $2.75 draft Yuengling pints). When they arrived, many in the older sect had their progeny in tow, ready to fork out $50 to outfit the youngsters in the latest swag. Speaking of which, the pandemic (and resultant shortage of workers) has turned most venues into cashless entities, so check out whether you'll need the plastic (or mobile pay app) before leaving home.

Mega Dave Mustaine celebrated a milestone, his 60th birthday, just two days before. A cancer survivor, he looks amazingly good. The hair is back, the gray strains battling the ginger (but sure, like me, he's just glad to have a full head, at this stage in life). It hangs in his face (per usual) and he's dapperly attired (by metal standards), in white button down long sleeve dress shirt and black jeans. The stage is bare, 26 Marshall cabinets erect a formidable wall, drummer Dirk Verbeuren perched atop. Between the amps are vertical video screens that can act independently of one another, or join forces to flash a larger, concerted image. Strangely, neither band is promoting an album. Health scares and the pandemic having goofed up the typical record-tour-record business cycle, it's been half a decade since the last studio album! Thus, as Megadeth approaches their 40th anniversary, we're treated to something of a short (dozen songs, including "Conquer Or Die!" instrumental) impromptu career retrospective, minus some notable exclusions. 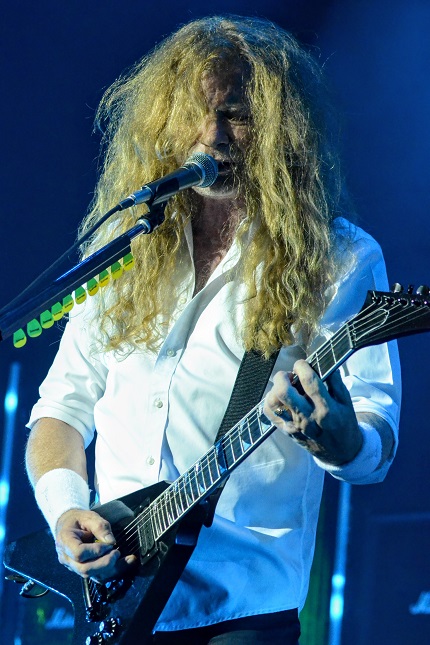 As the curtain drops, to the "Prince of Darkness" intro tape, cartoon images of the band's mascot Vic Rattlehead, flash in triplicate, like the windows of a slot machine. Lots of spinning white searchlights sweep the stage, as the staccato riffs of "Hangar 18",  greet a cheering mob. Initially center stage is empty, Mustaine gradually working his way "home." Kiko Loureiro, to Dave's left (audience's right) is animated, bouncing around. He's free to roam, but careful never to cross the invisible boundary that is Mustaine territory, unless invited. It's apparent the ex-Angra guitarist is a formidable player, the ease at which he handles the material, yet still has room to add some showy flares. For the guitar break in "The Threat Is Real", Mustaine, Loureiro and returning bassist James Lomenzo have a brief, circular, center stage pow-wow. Dave briefly talks to the fans (apparently somehow pushed for time tonight), but assures them that if pandemic creates another situations where "they say you're not allowed to have live concerts anymore, come out to my house, in Tennessee." Cue the first real sing-along of the night, in the form of "Sweating Bullets", where Dave's hand motions, enacting/enhancing the lyrics, almost seem to mock his creation.

Some nights, the once self-imposed banned "The Conjuring" (black magic references contradicting Mustaine's religious philosophy) has appeared in the running order, but not tonight, which leaves only the legendary Peace Sells title track, as the lone inclusion aired from the initial trio of classic albums. As much of a shocker (cinematic pun intended) as that is, the real head scratcher is not one, but a pair off Cryptic Writings ("She-Wolf" and "Trust", back-to-back, tonight). Never considered that essential Megadeth. Thankfully, the game changing Rust In Peace remains the focal point, with no less than four cuts on display. There's a pause, the stage completely black (during which "Megadeth" chants can be heard) before Kiko is seen (alone) with pole mounted acoustic guitar, red lights zig zag across the stage. Wait! He's not alone, there's an extra-terrestrial  on the opposite side of the stage, with high tech flashlight. Power failure over, the guitarist grabs an electric model, as an 8 foot robot walks through a door in the Marshall wall. everything is layered in a mist of fog. The visitors depart under veil of darkness and with a spark of light, the entire band is back onstage, for "Dystopia". 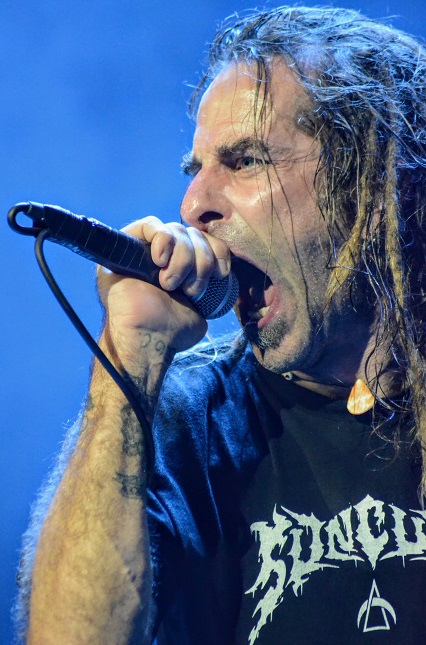 Mustaine introduces "Tornado Of Souls" saying it's Loureiro's favorite solo to play, "This is a treat. He really nails this solo." So much for his reputation for never saying anything nice (publicly) about his bandmates. When the song ends, there's an unscripted golden moment. Dave was once an expert on drunken exploits, So when he turns up the house lights and admonishes a guy who puked at the foot of the barricade, it was, in a word, hilarious. In deadpan delivery, "No, that's not heavy fucking metal, that looks like lunch. Are you a vegan? That's tuna? It's chicken! OK, can I get back to the show now? You done barfing?" Checkerboard of white strobes pulsates to the rhythm of a rapid run-through of blue hued "Take No Prisoners"

Switching to one of the Kramer guitars that they auction off each night, it's the measured stomp to "Symphony Of Destruction", with easy sing-along chorus. The crowd obliges. More audience participation is just around the corner. Lomenzo's bass chords introduced "Peace Sells", punctuated by the man asking the crowd to clap along. They shout the chorus and eventually Rattlehead appears. After playing air guitar between Mega Dave and Kiko, Vic throws his arm around Dave's shoulder. Never bashful in toss his opinion into the political foray, prior to the "Holy Wars" encore, Mustaine returned to the stage and took a couple of minutes to talk about the mask mandated "tyranny" (his word) that's going on in the schools and medical community, nationwide. Ironic, since photographers were supposed to have a temperature check, before entering the building, and then wear a "FDA approved mask," while in the pit, or forfeit one's press credentials. Meanwhile, security, who stood side-by-side with the photogs, the people charged to literally catch/caress/touch barricade breaching crowd surfers, were mask-less, the entire lot of them.

Preceding Megadeth to the stage was Lamb Of God, who see Philly as their second home. True to that spirit, there was a sizable contingent who left, once the Richmond musicos were finished. In nursery rhymes, Jack be nimble. Jack be quick. Jack jumps over the candlestick. Well, in metal: Randy be nimbler. Randy flies higher. Leaping off drum risers and avoiding the fire! Like Pantera before them, Lamb Of God dispense with ancillary visuals, content on delivering a musical pummeling, with the psychotic reactions of a frontman, throwing himself around the stage. Randy Blythe's dreadlocks dangle to his waist, but just as often, they are whipped side-to-side, or overhead as he repeatedly flagellates the air, or anyone who might come too close to his hairy cat-o-nine tails.

Band hidden behind curtain emblazoned with their logo, the only sedate moments were the opening to "Momento Mori", because once the veil dropped, madness ensued. Behind the band, at the back of the stage, were a set of ten robotic, 360 degree motion lights, either side of drummer Art Cruz, as well (seemingly) as many vertically shooting flame cannons. They actually kept the pyro under wraps until "Ruin", where Blythe sprang from Cruz' riser. But once unleashed, it was like a warzone, or maybe Hell, which is apropos since "Walk With Me In Hell" was up next. A conflagration onstage, thankfully controlled. Well, maybe not the inhabitants, but the pyrotechnics. Is it just me, or does long aired, white bearded bassist John Campbell look like Steve Carell, in Evan Almighty? Deep blue lit, the pre-recorded intro to "Resurrection Man" gave Blythe and Co the chance to have a breather and maybe grab some water. But rather than drink it, the singer (as he'd do repeatedly throughout the night) dumped it over his head, keeping those tentacles lubricated, loose and lethal. Initially more of a heavy groove, than speed, the guitar tandem meets, as Randy stalked the stage, traipsing from one side to the other. 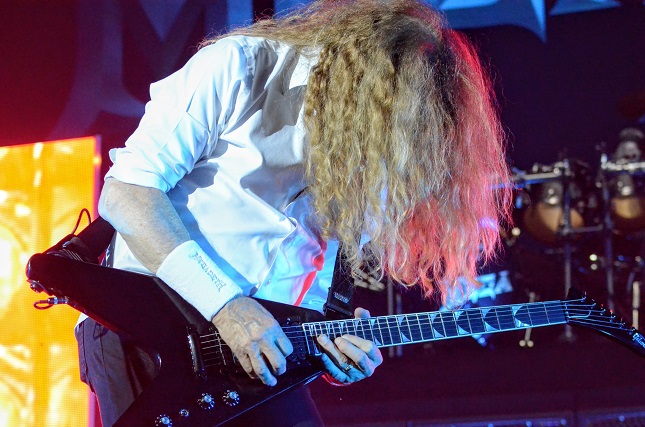 When addressing the crowd the Medusa coiffed frontman references the city as Killadelphia (like the live DVD that was shot there), going so far as to praise the area, saying, "We're just across the river from our spiritual home. That's where it all started for us." He didn't even have to announce the entire title, fans filling in the missing pieces as well as almost all the lyrics, for "Now You've Got Something to Die For". Simple, repetitive, infectious and a fan favorite. Guitarist Mark Morton has a chance to shine on the blue/purple tinged "Set To Fail". The stage is smoking for "New Colossal Hate", as the singer paces about, tethered mic (extra long cord) pressed to his lips. CO2 eruptions keep things cloudy, maybe that's why Blythe occasionally sings upside down? At one point he announces it has been 15 years since the band toured with Megadeth. He also dedicated "512" to the late booking agent who gave them a start, in Philly. Throughout, the stage is red, with occasional sweeps of white overhead lighting.

Next up, start-stop riffs of quick hitting "Vigil", begun on blue lit stage with piped in guitar, followed by more carbon dioxide explosions (nearly obliterating the band from view, regardless of one's proximity to the stage). By contrast, relentless "Contractor" is manna for the moshpit maniac: slam dance heaven! Saving two of the biggest numbers for last, they've already whipped the frenzied throng near pandemonium. "Laid To Rest" is up first. (middle finger in the air!) Atop his steel screen riser (that looks suspiciously like some backwoods animal trap/snare) the flexible Blythe pinwheels his hair, then, sings, bent at the waist, with his face staring at his shins, as the dreads scrape the deck of his "cage". Even though a recovering alcoholic (whose been instrumental in experimenting with discovering a good tasting, zero alcohol beer), Blythe was onstage to start "Redneck" with a beer can (hopefully non-alcoholic prop) in hand. After mentioning the lawn crowd and asking for a circle pit, it was machine gun drumming, under a red/yellow tinge, broken only by white strobes. It's a virtual end-the-night sing-along, start-to-finish. Speaking of its completion, everything was shot off simultaneously, CO2, fire, etc. Happy ending!