NASTY SAVAGE - If You Want Blood... You've Got It! 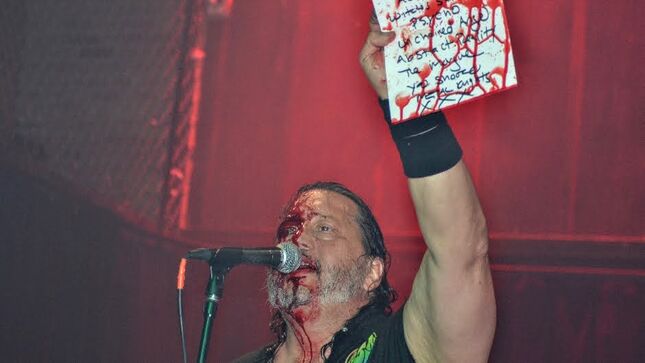 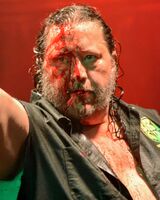 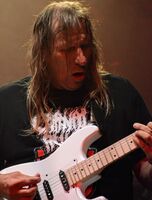 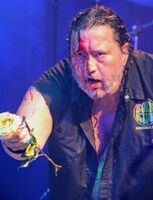 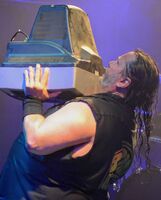 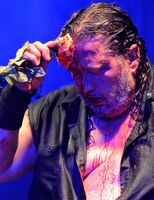 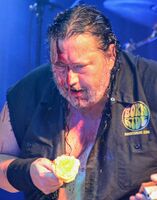 Not sure how many remember how big a deal the Wage Of Mayhem demo and the Nasty Savage debut were, back at the dawn of thrash. Ronnie Galetti (who moonlighted as a professional wrestler) brought the same over-the-top antics, from the ring, to the concert stage: throwing himself around, destroying TV sets with his body and leaving the whole place a bloody mess. Little has changed, nearly 40 years later! Capping the first night of the Chicago based Legions Of Metal festival (a full report will be forthcoming), the Savages treated old fans to a blast from the past, as well as stunning a few newcomers, unable to comprehend what they'd just witnessed.

It all begins so innocently, Galetti in sun glasses, ball cap and sleeve-less button down shirt. On the drum riser sits the night's sacrifice. No, not skinsman Jim Coker, but an old school, cathode ray tube television. Throughout the show, Nasty Ronnie teases and has foreplay with the outdated electronics, at times adoringly stroking and caressing the machine, others, tugging it around by the chord. This all goes on during the non-vocal interludes of the songs. Guitarist Dave Austin is out front, thrashing away, his stringy hair soon plastered to his face. Speaking of which, Galetti frequently dumps pitchers of water over his own head, working himself into a frenzy. "Gladiators" was up early, although the falsetto counterpoint of his youth is no longer attempted. A circle pit breaks out for "Asmodeus". Have to think such actions warm the big guy's heart, a physical concert goer himself. Another classic, "Witches Sabbath" is followed by a green lit "Psycho Psycho".

Orange and green lights greet old friend "Unchained Angel", crowd barking the titular chorus back at the guys onstage. The ball cap and shades return for "Abstract Reality". Ronnie dons a skull mask (which restricts the clarity of his singing) for "The Morgue". He distributes roses to the audience and drops the petals on the television set that's about to meet its end. "You Snooze, You Lose" gets the floor swirling again. Lifting the TV overhead, letting it fall against his chest and then to the floor, repeatedly, it isn't long until the set lies in pieces and Galetti is bleeding like a stuck pig. When the frame becomes unhinged (the TV, not the man, although some might debate the issue), he reenacts Lizzy Borden's Visual Lies artwork, poking his red stained visage through the opening. Rousing "Metal Knights" sees the frontman handing out electric bits & bobs souvenirs, before ending with the punishing speed of "XXX."

Battle over, like a triumphant fighter, Galetti stands dazed and bloody, hoisting the blood soaked setlist overhead, like some championship belt. Another audience KO’d. The champ, long may he reign!