RAGE Spreads Their Wings In London! 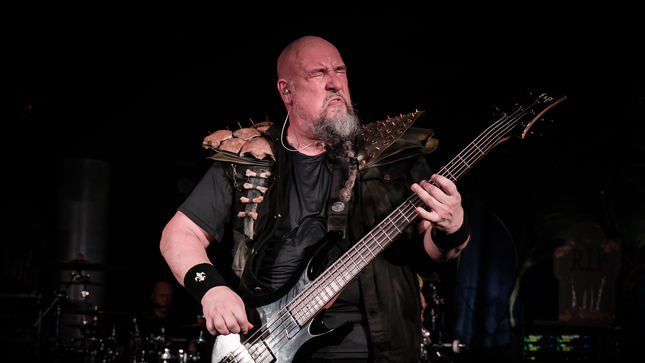 On February 8, 2020 German heavy metal legends Rage exploded the Saturday evening at the famous Underworld club in the heart of London nightlife, supported by Austrian symphonic power metal band Serenity and British heavy metal band Savage Messiah. Led by its irreplaceable founder and leader Peavy Wagner, with Marcos Rodriguez on the guitar and Vassilios Maniatopoulos on drums, Rage played a full-scale show. The stage was converted into a graveyard decorated with tombstones. Peavy Wagner is a passionate collector of rare skulls and bones, so his best specimens were hanging from microphone stands and also were heavily used in Peavy’s outfit.

The latest, 25th (twenty-fifth!!!) Rage album titled Wings Of Rage was released just a few days in January and the hall full of English metal fans welcomed songs from the new album: "Chasing The Twilight Zone", "Wings Of Rage", and "Let Them Rest In Peace". And for those who followed Rage from the ‘80s and ‘90s, the older songs were played: “Shadow Out Of Time”, “Until I Die”, “Don’t Fear The Winter”, and “Refuge”, to name a few. Apparently, these songs were older than some people in the hall! The concert concluded with “Higher Than The Sky”, and a medley of Ronnie James Dio and Iron Maiden songs, where Peavy handed over the singer role to Marcos and the whole club joined in and sang along.

After the concert, musicians were seen in the bar, signing the discs, and the queue of fans waiting to take a selfie with them was longer than the queue for the beer! Head over to Rage-Official.com for more tour information.

Special Thanks — Dan Hetherton (The Underworld)