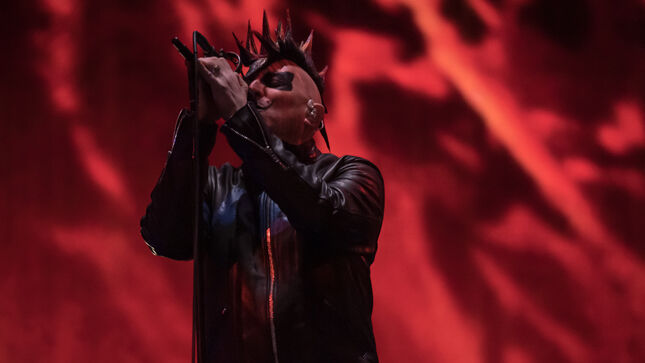 Tool's Fear Inoculum tour rolled through Orange County with a stop at Anaheim's Honda Center. This tour, which initially began in the fall of 2019, is now on its second leg with the band playing two shows in Southern California this time around.

Fans arrived at the arena shortly before noon and waited in line for over six hours for the chance to be one of the first in the venue to grab the coveted tour posters. These posters, which are unique to each show, have become highly sought after by fans and collectors alike. Aside from great music, Tool have eye-catching merch - which was on display on the fans throughout the venue as they wore shirts from previous tours with pride.

Shortly before 9 PM, the house lights turned off and the roar of the sold out crowd swelled as Danny Carey took his place atop his heavily populated drum riser. He began playing the opening parts to "Fear Inoculum" and the night was on its way. This ten minute song is the opening track for the band's 2019 release of the same name and served as the tour opener for the first leg of this tour a few years ago. Adam Jones' guitar tone is familiar, unmistakable, just perfect. The compliment to that is the low end rumble of complexity that Justin Chancellor provides as his rhythmic aftershocks accentuate Carey's mind-boggling polyrhythms on the drums. When not singing, Maynard James Keenan is watching the crowd usually from a crouched position as he seems to feed off the energy of the fans before delivering his next vocal passage. Aside from the title track, the band played five other songs off Fear Inoculum including a couple of standouts like "Pneuma" and "Invincible" which was the closing song for the night. "Culling Voices" has also been integrated into the set and it was great to see that one live.

Blonde Redhead, an alternative rock band from New York served as the opener and were a great selection as openers. Though not in the same vein as the type of music Tool would play, this three piece band's diverse set offered fans a chance to check out their alt/noise rock stylings and undoubtedly as a result, added a few more fans.