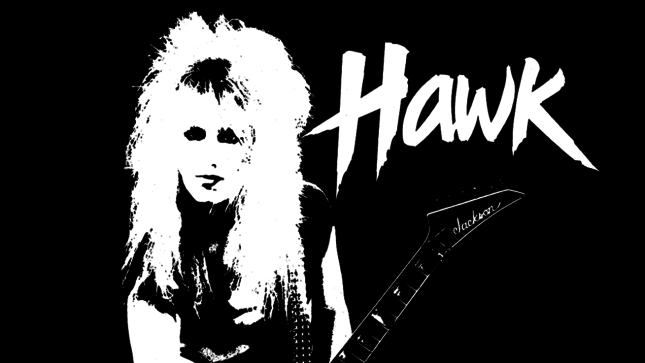 Sunset Strip ‘80s metal icons Hawk featuring guitarist Doug Marks, founder and creator of the legendary Metal Method mail order / online guitar courses have released their self-titled debut album for the first time ever, as part of an extremely limited run of professionally manufactured CDs. The album is also being released worldwide via all digital formats. In addition, there are plans for the recording of a brand new second Hawk album during 2020.

The Hawk album was recorded in 1986 as a Doug Marks solo project. The recording was made after the original band had dissolved earlier that year. The original lineup included Scott Travis (Judas Priest), Lonnie Vincent (BulletBoys, King Kobra), Charlie Morrill and Doug Marks. Doug Marks is the only original member to appear on the Hawk album. The Hawk album also featured David Fefolt on vocals (formerly of Masi, Angels of Babylon, FireWolfe) and Matt Sorum on drums (formerly of Guns N’ Roses, Neurotic Outsiders, Velvet Revolver).

“After thirty-three years I’m having an album release party! What took me so long? I confess, I’m a procrastinator. Duh.

“Actually, it’s not as bad as it sounds. I signed a deal with a distributor, Ryan Northrup, in 2000 to replicate and distribute my album on CD. We had a great first quarter then he decided to not pay me again. Shafted. Aggravating, but there wasn’t enough money from sales to hire an attorney to go after him. So, here we are, nineteen years later. Better late than never!”

“I’ve been running ads in Facebook to reach Metal Method students from the ‘80s. The lessons were huge then from monthly, full-page magazine ads that reach as many as 500,000 monthly readers. Plus, the lessons were inexpensive. I sold hundreds of thousands of them. Anyway, the Facebook ads stirred the pot big time.

“I’ve begun posting early Metal Method and Hawk stuff on Instagram along with Facebook. If you have time, I would appreciate a follow on both Facebook and Instagram. I’ve had the Instagram account for probably four years and just started posting to it last week. I put up a clip from my first video recorded in 1986 along with other “nostalgia” art – a 1983 magazine ad, and Hawk album art.

“I digress. Next week I’ll have a hundred professionally recorded CDs. I decided to do only a hundred to test the waters. So, if you’re interested you can order them from our site. However, you won’t receive them any faster than ordering them on iTunes or from CD baby. The difference is, for the next few days the CD is only available on the Metal Method site.”

“I would like to record an album next year. This album release may show me if there's interest. What I would like you to do is similar to crowdfunding, except you don’t need to send any money. Show interest in the project by putting Hawk in one of your Spotify or Apple Music playlists. Purchase the CD or download from iTunes. You can pre-order the album on our site, but I would prefer you wait a few days and order it from iTunes. The reason is, that is activity that will be registered by Apple. A purchase on my site is appreciated (and more profitable) but I'm wanting to create interest online.”

Preview and purchase the album here.